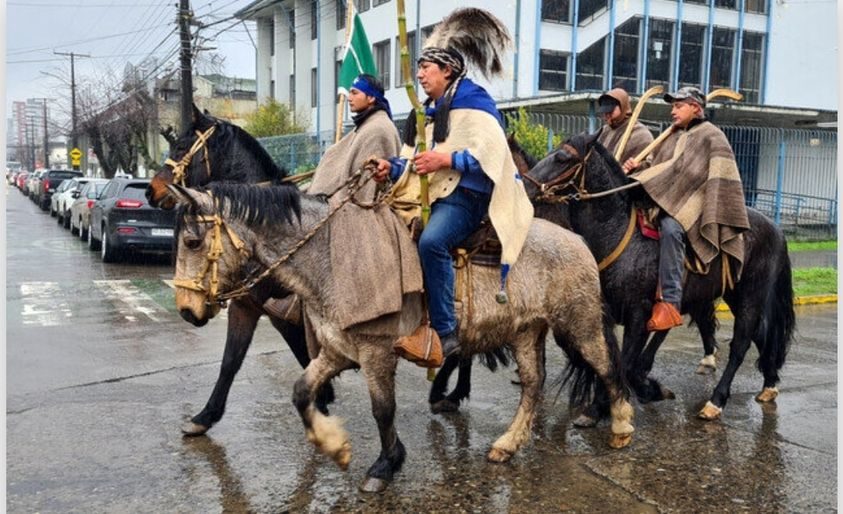 «For national and international public knowledge.

For the original peoples of the world, the Mapuche people and all their expressions of resistance. We come to inform you of the following:

To the After 10 years of political prison of our ancestral spiritual authority machi Celestino Córdova, we come again to raise our voices to say that he is innocent. These years of dignity and endurance have paved the way to raise the just demands regarding those deprived of liberty belonging to indigenous peoples. Undoubtedly, there is still a long way to change racism, the denial of our rights and the free spiritual exercise, but we will continue advancing in the modification of the Penitentiary Regulations and we will not stop demanding their freedom.

Despite what many believed with this change of government, our situation as the Mapuche people has not changed; indeed, we are experiencing an increase in repression. Today, the defense of the State towards the economic powers is evident. We have, for example, the blind defense of the forestry business. Despite the tremendous damage they do to the ñuke mapu and to all the communities near the forestry by leaving them without water. However, the defense of private property continues to be more important to the well-being of a people and the care of Itrofill Mognen. Recently, for this reason, they have arrested and persecuted different lamngen/peñi from various territories.

If we look at what happens in Puelmapu, exactly the same thing happens. Our lamngen are still imprisoned for defending the ñuke mapu and our spirituality. For this reason, we express our support and demand the release of the three lamngen political prisoners and the return of the machi Betiana Colhuan Nahuel to her rewe.

These days there has been a lot of talk about a project to build an exclusive jail for Mapuche. We believe that Convention 169 continues to be misinterpreted. Here it is not about building a new ghetto (as the Jews were separated). Rather, each prison advances in the application of the Convention. That is what we have always supported and that is why we will continue to raise our voices. An exclusive prison for Mapuche, directly attentive to the territorial attachment and the closeness that the family must have to be able to visit the person who is deprived of liberty.

We salute the dignified struggle that our lamngen/peñi from the Winkül Küsra lof are carrying out from within the recovery of the Santa Herminia estate of the Masisa SA forestry company in Loma de la Piedra, San Juan de la Costa commune, formerly Kunko Mapu. To those of us who are killed in our llellipun and we send them all the newen and spiritual strength to continue fighting, in defense of the ngen mapu Winkül Küsra and all the Itrofill Mognen.

We call on all the Mapuche people on both sides of the mountain range, to firmly oppose the construction of an exclusive prison for Mapuche, to advance in unity in action, to remain alert to the advances they want to make supposedly for our well-being. like mapuche. Without even asking us.

The landowners, extractive companies and salmon farms must leave the Mapuche territory!

Mapuche Nation. Upon completing 10 years of political prison, they demand the freedom of Machi Celestino Córdova / They also ask for the community members detained in Bariloche – Resumen Latinoamericano