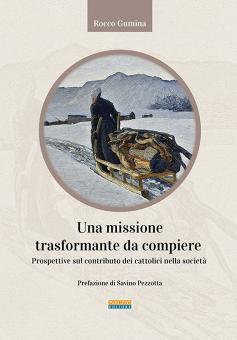 A tool to reflect and stimulate the commitment of Christians. This is the underlying engine that animates “A transforming mission to accomplish. Perspectives on the contribution of Catholics to society”, the new book by Rocco Gumina, published by Paruzzo Editore. Professor of Religion in the state schools of the diocese of Palermo, a Masters in bioethics and one of the founders of the movement Open open policies, for the development of good cultural, economic and political practices, prof. Gumina boasts several publications in specialist journals and volumes to study the connection between theology, politics and spirituality.

Prof. Gumina, in an increasingly liquid politics, in which ideals have given way to the search for mass consensus at any cost, what new things can committed Christians still bring?

First, I think that the liquidity of the company influences the policy to the point of registering the absence of the same. In fact, the real problem gripping today’s politics is its lack or the impossibility of generating both a synthesis between the various social components and visions capable of going beyond the management of emergencies in order to flow into planning. In fact, in our day, there are no longer those paths that have marked the politics and parties of the European twentieth century. In such a scenario, I do not believe that the novelty can develop from specific groups – including Christians – but this could originate from the response to events that literally happen by the will of a few men, such as the war in Ukraine, or by uncontrollable factors, such as the pandemic from Covid-19. Faced with historical news, unwanted or unexpected such as a conflict or a virus, men react in various ways. That of the followers of Christ, as Pope Francis reminds us in the social encyclical Brothers all, is placed in the rediscovery of the centrality of the human person aimed at giving birth to fraternal relationships aimed at promoting the common good. From this point of view, I am convinced that the Christian style can bring innovation to today’s politics, starting with the way of dealing with the facts that occur. It is a question of tackling them through attention to man and the diffusion of the fraternity that politics desperately needs if it wants to make an impact on history again. In the light of this reasoning, the Christian proposal can offer something new in today’s panorama: that of a more humane politics. Far from representing an abstract idea, a more humane policy is a kind of proposal characterized by the constant consultation of morals and, therefore, aimed at guaranteeing the dignity of every person. Only in this way will the ethics deriving from the Christian option be able to constitute a sort of alternative to the mass turbo-capitalism typical of the societies of the most advanced countries. In short, if we interpret the world in an evangelical key, peace – sought and shouted in many squares even by Christians – and health for all, to be guaranteed in the pandemic era, are significant innovations aimed at profoundly innovating politics and institutions.

In his book he talks about the Christian vision of the economy or the social value of the Christian message, citing authoritative sources of the past such as Giorgio La Pira. In your opinion, can we start from these testimonies for a more supportive approach to both politics and contemporary society?

I believe the value of the testimonies is indisputable as long as they are not interpreted as a sort of static image to be re-proposed integrally and without critical detachment. In the Italian twentieth century, many Christians were innovators through their commitment to politics and society. Just think of the mutual aid societies of the early 1900s, the non-denominational party path of Don Luigi Sturzo, the commitment to resistance to Nazi-fascism, the drafting of fundamental articles of our constitutional provisions by Giuseppe Dossetti, Aldo Moro, Giorgio La Pira, Giuseppe Lazzati, to the commitment of many men and women of the Christian Democrats for an increasingly free and just Italian society. These paths were possible because starting from a certain interpretation of the world, the Christian one, there was an interaction with the historical reality of the moment which made these characters protagonists who we now consider witnesses. Therefore, remembering these figures is not enough. Today the communities of believers, and all those who come across the political work, are invited on the one hand to know and preserve the lesson of the past on the other to put it into circulation in the present characterized by totally different dynamics from the historical periods that have passed. It is, then, a commitment aimed at spending the good things inherited to make it bear fruit in completely original ways and times. Catholics in particular are called to this effort marked by the study of testimonies and the courage both to invest and to risk for a commitment aimed at the good of all. On this educational-training aspect, parish communities and Catholic groups are seriously invited to question themselves on their commitment to the “dynamic” knowledge – and therefore critical and up-to-date – of these witnesses who have become the “salt of the earth” from a Christian vision of reality. and “light of the world”. Only in this way will the social and political acquisitions we inherit – on values ​​such as freedom, justice, solidarity, subsidiarity – be able to germinate a fruitful approach for the present and the future.

Pope Francis during his pontificate reaffirmed the concept of a Church that walks in the history of men. A Church with open doors and solidarity. Someone criticizes his thought as too little related to the eschatological purpose of Christianity. What did you think?

I believe that the question does not only concern the teaching of the current pontiff but, more globally, the acceptance and integral understanding of the Gospel message annexed to the attempt to live it in everyday life. Regarding this theme, Father Bartolomeo Sorge expressed himself in these terms «The Gospel is not a book to be read. It’s a book to live by.” For the Christian, in fact, human history is the time in which to proclaim the mercy of the Lord everywhere including the social, political, economic and cultural horizons. We deduce that the believer inhabits the world and has no right to separate himself from the problems that afflict humanity. Indeed, precisely the mission connected with the proclamation of the kingdom of God concretely impels the disciple to promote the dignity of all, especially the poor. In this way the believer is not a spectator of the evolution of events but he is invited to become an actor to practically affect reality with works aimed at the full development of man. Thus, the social relevance of the evangelical proclamation represents an essential dimension of the same since the Christian truth is not “of the other world” but of “this world”. In fact, as the theologian Metz writes, we must not forget that Christian spirituality and mysticism – far from coinciding with introverted intimisms and fideisms – are profoundly political. The politics of Christianity does not lie in the search for power but in the perspective of assuming all of reality as a means of one’s own salvation and that of others. Consequently, the kingdom of God proclaimed by Jesus refers to a liberation that is not purely interior but also historical-worldly and material. For the believer, this declines as follows: man’s relationships with the world are decisive for man’s relationships with God and vice versa. I am convinced that the magisterium of Pope Francis best expresses similar social declinations of the Christian proclamation based on what the pontiff himself writes in number 177 of theEvangelii Gaudium «the kerygma has an inescapably social content: in the very heart of the Gospel there is the community way and the commitment for others».

It happens that when the Magisterium intervenes on issues related to the “earthly” sphere, especially if controversial, it suffers attacks regarding interference with its area of ​​competence. But is it really so? When the Church expresses itself on events or social evolutions that also closely affect the political field, can she pretend nothing has happened, remaining confined to her role of spiritual guide?

In the first place, I am convinced of the fact that the magisterium always intervenes on questions which concern man in his integrity. We cannot, in fact, separate the spiritual part from the carnal one. Man is a unitary being and the many aspects of his essence mutually influence each other. Without this theological premise, there is the risk of implicitly giving support to secularist visions aimed at silencing the public and social relevance of religions in the name of a presumed neutrality with nihilistic results. Having clarified this, I think that a certain Western culture is defective in reading the value of secularism. The latter does not reside in an abstract neutrality, in hiding one’s own identities, in silencing the reflection on society matured by religions. On the contrary, secularism is the inclusion of those who are different and of pluralities capable of converging on issues that concern everyone through communicative action. In this version of secularism, the contribution of religions – and therefore also of Christian reflection – is not only welcomed but hoped for in order to promote human dignity. Consider, for example, the declaration on human fraternity written by Pope Francis and the Grand Imam of al-Azhar Ahmad Al-Tayyeb in February 2019. However, the reasoning connected to the commitment of Catholics in politics is different. If the mission of the Church as a community is linked to both a spiritual and an educational purpose, lay believers – as the Second Vatican Council teaches – are invited under their own responsibility to trade their talents in society and in politics. In the light of this, we must clearly maintain that the Church cannot engage in “party politics” but her children – raised through her teaching – are called to take part in the political arena for the search for the common good which can be achieved in the belonging to party subjects who, in their vision, place man and his needs at the centre.

“A Transforming Mission to Fulfill” the book by Rocco Gumina which investigates the link between Catholics and politics. We talk about this with the author – Korazym.org