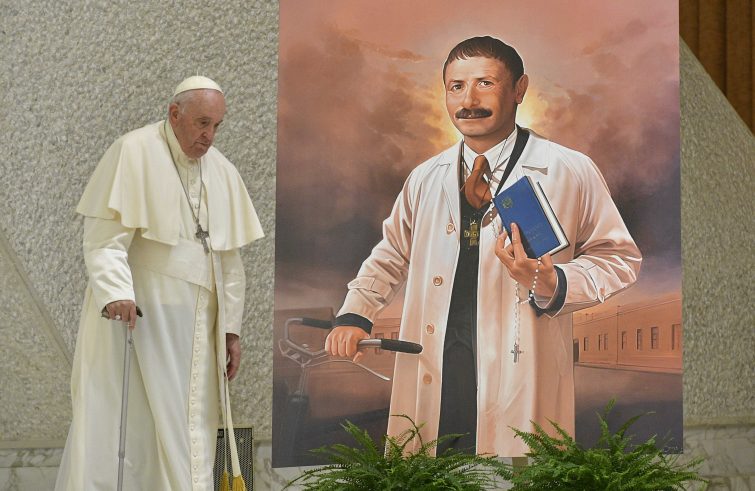 A saint of everyday life, of the encounter with people and above all with the sick. A saint who has lived through some situations that make him contemporary to the sufferings of today: emigrant, from Italy to Argentina, engaged in the world of health, as a nurse and as the soul of the first hospital in Patagonia. Finally, a saint of simple but robust spirituality. It was all this Artemide Zatti, who is canonized by Pope Francis on Sunday 9 October, in St. Peter’s Square

A saint of everyday life, of the encounter with people and above all with the sick. A saint who has lived through some situations that make him contemporary to the sufferings of today: emigrant, from Italy to Argentina, engaged in the world of health, as a nurse and as the soul of the first hospital in Patagonia. Finally, a saint of simple but robust spirituality. It was all of this Artemide Zatti, who is canonized by Pope Francis on Sunday 9 October, in St. Peter’s Square. Salesian brother, born in Boretto (Reggio Emilia) on 12 October 1880 and died in Viedma, a coastal city in the Argentine province of Rio Negro, on 15 March 1951. Emigrated with his family to Argentina in 1897, he came into contact with the Salesian world in Bahia Blanca; after contracting tuberculosis, he was sent to Viedma, the gateway to the evangelization of Patagonia; without becoming a priest, he made his perpetual profession in 1911. Nurse and pharmacist, he dedicated the rest of his life to the sick, assuming responsibility for the hospital started by the Salesians, and visiting them in the area by bicycle. In 2002 he was beatified by Pope John Paul II.

The bishop of Viedma: “Holiness lived in everyday life”. A person truly perceived alongside the people, as the bishop of Viedma, mgr. Esteban María Laxague, also a Salesian: “All saints are a gift from God, they testify to his work in history. And we feel this saint of ours close to our time. He is a person who has concretely shown a holiness lived in daily life, doing ‘good good’, managing the hospital, cycling around Patagonia, looking at not only bodily but also spiritual health. He gave hope to the sick, but he also sowed joy, as Don Bosco had asked for. He was part of the migrant community, he met the Catholic workers’ club, he played bowls with them. For this reason, even today people feel him ‘one of them’. A life that made itself known even outside Argentina, given that the miracle approved for canonization took place in the Philippines.

It is therefore logical that there is expectation throughout Patagonia. The thanksgiving mass will be held on October 30 “Here people have always considered him a saint, the hospital was named after him, but also a district of the city of Viedma. Many people who knew him are still alive. In these years of pandemic he has become the patron of the pastoral care of health, in November, during the assembly of bishops, he will be proclaimed patron of Argentine nurses. Finally, I think the coincidence of the canonization of Giovanni Battista Scalabrini is also important, given that Zatti was a migrant ”.

Patagonia in celebration. From the Salesian community of Viedma, he continues father Pedro Norambuena, who is making particular efforts to organize local events on the occasion of the canonization: “Few can go to Rome with our bishop, but we are preparing a big party, with a procession to the church where he is buried. In addition, we have prepared a short film about his life, a book will be released. He is planning to expand the sanctuary. Artemide Zatti has always been very popular here. A multitude of people attended his funeral, the city was paralyzed, and immediately had a reputation for holiness. This is a time of grace and joy, which allows us to continue to follow the invitation that John Paul II gave us, in 1987, when he came here and asked the Christian community of Patagonia to ‘continue to be missionary’. Moreover, this was a land dreamed of by St. John Bosco, as a missionary frontier. And for this the Salesians arrived in Viedma ”.

Compared to Artemide Zatti, Father Norambuena also points out his “ability to see God in every brother”, his reputation for being the “relative of all the poor”, his talent for “weaving relationships in the service of life”, and his existence linked to assistance to the sick, ever since, still in vocational discernment, he fell ill with tuberculosis to assist a young priest. He was a saint ‘callejero’ (‘street’), concerned about the fulfillment of his duty and the encounter with the least ”.

Much invoked during the pandemic. From Cordoba José Sobreroauthor of a biography of the saint, adds: “He was a simple and good man, but also a multifaceted figure, capable of reorganizing the hospital of the small town, of animating the whole surrounding environment. He was able to integrate various aspects and experiences into his life: in particular, being a Salesian, being an emigrant, being sick and, following that experience, feeling that his vocation was to make the sick the priority attention of the his life, and above all of the poorest. Among all these aspects, I would say that his goodness stood out, which stemmed from a deep faith. It is a moment of great joy for many: for the Salesian family, for the community of origin of Boretto, in Italy, for the Argentine Church and in particular that of Viedma. He has been greatly invoked in these pandemic years, and his message is not to lose hope, even in difficult times like those we have lived and are living in these years “.

Also for this reason, the bishops of the Patagonia-Comahue region of Argentina, in a letter written to all the faithful, stressed that “The whole world of health” is placed under the protection of the next saint, both the sick and the doctors, nurses, volunteers and attendants, so that they can be inspired by him in their service. “May Zatti also intercede so that health care is a priority in government public policies, a right of all, that no one is excluded from quality health coverage”, the bishops conclude.

Artemide Zatti, saint of everyday life. Archbishop Laxague (Viedma): “Even today people feel him ‘one of them'” | AgenSIR