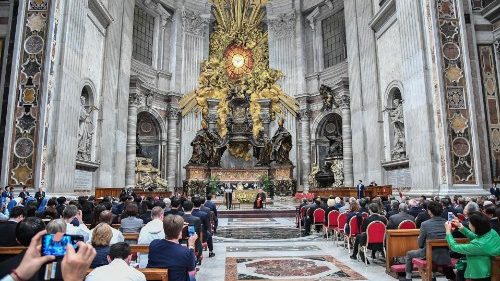 The biographical film “The Birth” has been produced on the occasion of the bicentennial of the birth of the first Korean Catholic priest martyred at the age of 25 in 1846. A preview of the work was presented this Wednesday at the Vatican.

Before the General Audience this Wednesday, November 16, in the space adjacent to the Paul VI Hall, the Holy Father met with about 30 people from South Korea, including producers and actors of the film The birth, about Saint Andrew Kim Tae-gon, the first Korean Catholic priest and martyr. The group, which listened to a speech given spontaneously by the Pontiff, was accompanied by Cardinal Lazzaro You Heung-sik, Prefect of the Dicastery for the Clergy; the rector of the sanctuary of the holy martyrs that the Pope visited in August 2014; and also the girl who on that occasion offered a silver rose to Francisco.

In August 2021, on the occasion of the bicentenary of the birth of André Kim, the Pontiff described the priest as “an exemplary witness of heroic faith and a tireless apostle of evangelization in difficult times, marked by persecution and the suffering of his people.” .

Screening of the film in the Vatican

This Wednesday, November 16, at 5:30 p.m. (local time), a preview of the film was shown in the New Hall of the Vatican Synod. The event took place after a press conference last week and before the film’s premiere in South Korea on November 30. The film, by director Park Heung-sik, stars lead actor Yoon Si-Yoon.

At the press conference, the director said that “the film is set in the Joseon Dynasty (1392-1910), but also features scenes related to China, France, Great Britain and the Philippines.” However, as the pandemic limited overseas travel, footage was shot throughout Korea and some was computer generated. Another issue is that of languages, since the priest Andre Kim has accepted Western culture through languages, education and religion. Thus, in the film, the actor who played the martyr, Yoon Si-Yoon, spoke in French, Latin and Chinese.

The bicentennial of the birth of Saint Andrew Kim

On August 21, 2021, the 200th anniversary of the birth of Saint Andrew was celebrated. On the occasion of this event, the pilgrim Church in South Korea lived a Jubilee, which began on November 29, 2020 and ended on November 27, 2021 (last day of the liturgical calendar). A favorable occasion for the spiritual growth of the Church in Korea, as the now Cardinal Lazarus You Heung-sik, then head of the Korean diocese of Daejeon and responsible for organizing the Jubilee, explained to the Vatican media on that occasion.

“This Jubilee – said the Cardinal – will give us all the opportunity to internalize the spirituality of martyrdom, which is the essential lifeblood of the Church in Korea, deeply meditating on the lives of the martyrs.”

Monsignor Lazzaro You, prefect of the Congregation for the Clergy, presides for the first time at the ceremony at the Altar of the Chair in the presence of priests, religious and faithful of …

The life of Saint Andrew Kim

The film is based precisely on the life of Father Andrés Kim, born in 1821 into a family of Christian principles. But the play, according to Seoul’s Yonhap news agency, focuses specifically on the period when he went to study at a seminary in Macau, with his ordination to when he was a victim of religious oppression during the Joseon dynasty. He was arrested and persecuted, being beheaded in 1846 for not wanting to repent, at only 25 years old.

Andrés’s father, José, was also killed with him. When his son was arrested, he appeared before the authorities declaring himself a Christian. He was baptized by his son in jail, before receiving with him the crown of martyrdom. Andrew Kim, along with his father Joseph and 101 other martyrs, were proclaimed saints by John Paul II in 1984, on the occasion of the two hundredth anniversary of the founding of the Catholic Church in Korea. Another 124 were beatified by Pope Francis on August 16, 2014, during his apostolic trip to the country, showing “with joyful hope that good always prevails, because the love of God overcomes hate.