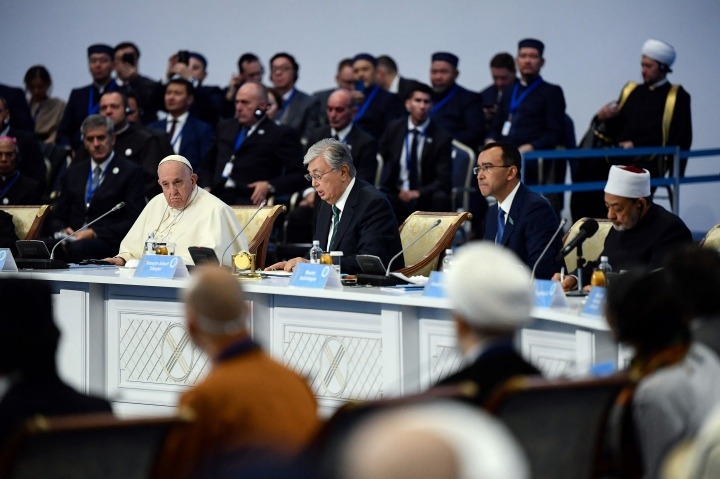 Kazakhstan. Congress of Religious Leaders. The Pope spoke of an “authentic religiosity” that does not use the name of God to promote total war

“Let’s never justify violence. Let us not allow the sacred to be instrumentalized by what is profane. Let the sacred not be support of the power and power does not rest on sacredness!”

The Pope Francisco He said it in his speech to the 7th Congress of Leaders of World and Traditional Religions in Nur-Sultan, Kazakhstan, this Wednesday, September 14, 2022.

“Aware of the horrors and errors of the past, let us unite our efforts so that the Almighty is never again hostage to the will of human power,” he added.

The Bishop of Rome presented himself as a spiritual leader calling on world religious and civil leaders to stop the World War III no longer “in pieces”.

On its second day in Kazakhstan, the urgent call for religions and their faithful are “purified” from the evil of feeling righteous and have nothing to learn from others.

Just last night, the Pope spoke of the tragic war resulting from the invasion of Ukraine and implored peace in his first address to the civil authorities of Kazakhstan gathered at the Kazakh Concert Hall in Nur-Sultan.

“Religious freedom constitutes the best basis for civil coexistence”, the Pontiff noted in his speech in the presence of the President of Kazakhstan, Kassym-Jomart Tokayev.

Francis follows in the footsteps of his predecessor, John Paul II, who came to Kazakhstan to sow hope after the tragic attacks of 2001.

“I come here in the midst of the crazy and tragic war resulting from the invasion of Ukraine, while other clashes and threats of conflict threaten our time.”

“We need understanding, patience and dialogue with everyone,” the Pope said. “Religious freedom is the best bed for civil coexistence.”

The Pope addressed above all the leaders of nations and reminded them of the Helsinki Agreements of 1975, signed by thirty-five States, including the United States, the USSR and almost all the countries of Europe.

In this line, the past speaks to the confrontation of the present, because in these agreements respect for the sovereign rightsthe non-recourse to the use of force, the peaceful settlement of disputes, the inviolability of borders, respect for human rights and freedoms, including religious ones.

Below is the Pope’s decalogue so that religions can save the world from total war, from the effects of the pandemic, build peace and work together for the care of the Common Home and “in the dark times we live in”, the religions can “radiate the light of our Creator,” he said.

The Pope teaches by example openness to the culture and faith of other religions. Indeed, the Pope was inspired for his speech by Abai (1845-1904), a Kazakh poet, composer, educator and intellectual with a deep sense of religiosity and spirituality.

1. Healing journey: no to hate

As long as inequality and injustice continue to wreak havoc, viruses worse than Covid will not cease: those of hatred, violence and terrorism.

The Pope regrets that “it is precisely indigence that allows the spread of epidemics and other great evils that thrive in the land of hardship and inequality. The biggest risk factor of our time remains poverty.”

2. God is not hostage to human will and power

Believers cannot help destroy the life and work of the Almighty who is love. Therefore, he called for a respectful and responsible dialogue and a commitment to peace.

Remembering the horrors and mistakes of the past, let us unite our efforts, so that the Almighty never again becomes hostage to the will of human power.

3. Let us purify ourselves of the presumption of feeling fair

Brothers and sisters, let us purify ourselves from the presumption of feeling just and having nothing to learn from others; let us free ourselves from those reductive and ruinous conceptions that offend the name of God through rigidity, extremism and fundamentalism, and profane it through hatred, fanaticism and terrorism, also disfiguring the image of man.

Let us purify ourselves, then, of the presumption of feeling just and of not having anything to learn from others,” exhorted Francis; “God is peace and he always leads to peace, never to war.

5. God is peace and always leads to peace, never to war.

God is peace and always leads to peace, never to war.

Let us commit ourselves, the Pope invited, even more, to promote and reinforce the need for conflicts not to be resolved by the inconclusive use of force, weapons and threats, but by the only means blessed by Heaven and worthy of man: the encounter, the dialogue, the patient negotiation.

Peace is not the fragile result of rough negotiations, but the fruit of a constant educational commitment that promotes their dreams of development and future.

The Pontiff has begged religious and world leaders not to spend money on the arms race; invest in people and “not in weapons, but in education”.

7. The path of compassion: teaching to cry for others

The path of compassion is what makes us more human and more believers.

Compassion as a path that leads to the dignity of the human person. “It is up to us, in addition to affirming the inviolable dignity of every man, Teach to cry for others, because we will only be truly human if we perceive as our own the fatigues of humanity”.

8. One last global challenge challenges us: care for our common home

In the face of climatic changes, it is necessary to protect (the Common Home), so that it is not subjected to the logic of profit.

Francis explained that the Common House needs a common front of religions to save life and face Climate changes.

9. The Most High has lovingly arranged a common house for life.

Let us think, for example, of deforestation, of the illegal trade in live animals, of intensive farms.

Francis insists that religions can save from the “mentality of exploitation” that devastates the house we inhabit. “Not only that; leads to eclipse that respectful and religious vision of the world wanted by the Creator. That is why it is essential to favor and promote the care of life in all its forms”.

Let us not look for false conciliatory syncretisms —they are useless—…

The Pope uses direct language to ask to work in diversity, but consistent with the common good, and to be “artisans of communion.” “Let us not look for false conciliatory syncretisms —they are useless—, but rather let us keep our identities open to the courage of otherness, to the fraternal encounter”.