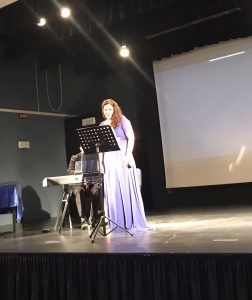 “Singing is an Alchemical way of transformation for oneself and for others”: Mezzosoprano Elena Bresciani, an eclectic artist of international fame, explains it to us.

As soon as the artistic commitment that saw her in the Commission at the final of the VI Edition of the “GB Rubini International Opera Singing Competition”, the Mezzosoprano Elena Bresciani is confirmed as one of the best vocal preparers on the national scene.

Female voice expert who follows throughout Italyin addition to fame like lyrical singer which led her to sing in every part of the worldfrom the Vatican to Carnegie Hall in New York, Elena Bresciani holds a plural degree in Literature at the State University of Milan, in Artistic Singing at the Donizetti Conservatory in Bergamo, in Voice Performance at Trinity College of Music in London and has also specialized in Education for Theatricality at the Catholic University of Milan and in Spiritual Theology at the Theological Faculty of Milan.

After 33 years of studying the singing technique and 23 years of teaching with over 400 case studies in opera, jazz, pop and musical, the artist gave birth toElena Bresciani Vocal Method to blend the best of European and American techniques with particular attention to breathing and improvising techniques, to SOVTE, to register and mechanism passages and to the expansion of the harmonic and timbral-vocal characteristics of each voice.

“I was a shy child, singing gave me happiness and made me feel free, this is where my whole story began – said the artist. By working hard and with a lot of willpower, my artistic life has become exactly what I had dreamed of as a child: from theaters, to the radio, to the jury in prestigious international competitions. Everything becomes possible if you really want to and work hard every day to achieve your goals.

At a certain point in my career, I realized that a plant cannot grow only in height, so I became a reference vocal trainer in opera, pop, jazz and musical, studying incessantly and giving all this to other artists. that life had given me. My pupils are wonderful branches, leaves, fruits and flowers that take sap from the roots of my tree and then soar on their own.

I have always looked for God in Art and my thoughts always go to eternity, which is why intertwining spiritual studies with my discipline was a natural consequence of my path.

In my idea of ​​Singing, the Voice is a Diamond that must be sculpted every day, the Artist’s task is to make himself as pure as this diamond and mirror the audience, purging their emotions and leading the listener to rise. The path of the voice, like that of the soul, must go towards purity, expansion, simplification. Chant is an elevated discipline that speaks on several levels and helps to expand consciousness, an Alchemical way of transformation for oneself and for others. For this reason, a work of introspection and activation that goes in depth and expansion is necessary. By working one’s own material part, thoughts and spiritual part, the Voice progressively changes and the Light pervades it, this progressively makes the Artist better and the Person better. The Mentor who has already passed through all the phases of his career, can accompany the Artist in this Journey of discovery of his own Voice and of his purest and most profound nature, this is the work I do with the Artists I follow.. I am a soul on a journey, who through singing helps other souls on their journey ”.

Her experience as a sound healer allows her to work on the formant of the harmonics, enhancing the tonal quality of the voices that follows and the elasticity of the extension also through the work with tuning forks at 432 hz and the use of connections between Tibetan bells, bells crystal and voice. A scholar of spirituality, in her advanced level group programs, she prepares professional artists as “mental coach” using psychology, alchemy and other disciplines aimed at enhancing the abilities of the artist’s psyche beyond the usual limits of the human brain, to raise the performance level.

After all, since ancient times, music has been considered medicine and harmonia mundi, the voice opens portals, illuminates consciences and makes them evolve and expand.

Working precisely on the healing potential of the human voice at certain frequencies in hertz, a group course in attendance will be born from October, the Group Program entitled “The alchemical voice – first level” where meditation enthusiasts, artists, yoga addicts and spiritual seekers will find a lot of information to use their voice in deep meditation, prayer, in their spiritual practices even with the help of bells (Tibetan and crystal), a second and third level will then follow during the year. The project provides the possibility of accessing a portal with sound tracks she has engraved with her voice and the bells for her meditations (Sound baths).

Thanks to the prestigious curriculum and constant commitment like leading voice mentorElena Bresciani is also an artist whose presence is sought after by major national and international events.

In September and October they are in fact numerous dates are scheduled that will see it as the protagonist:

Reviewed by prestigious magazines and newspapers including Opera, Amadeus, Corriere della Sera and Classic Voiceand also author of essays in the field of music for Eco Edizioni Musicali, Progetto Cultura of Rome and Franco Angeli, texts used by Italian Universities and the Academy of the Teatro alla Scala in Milan, and with Maestro Stefano Ghisleri, pianist and composer, is preparing the recording of FP Tosti’s Four Songs of Amaranta based on texts by Gabriele D’Annunzio.

The Mezzosoprano Elena Bresciani is confirmed as one of the best vocal preparers on the national scene.