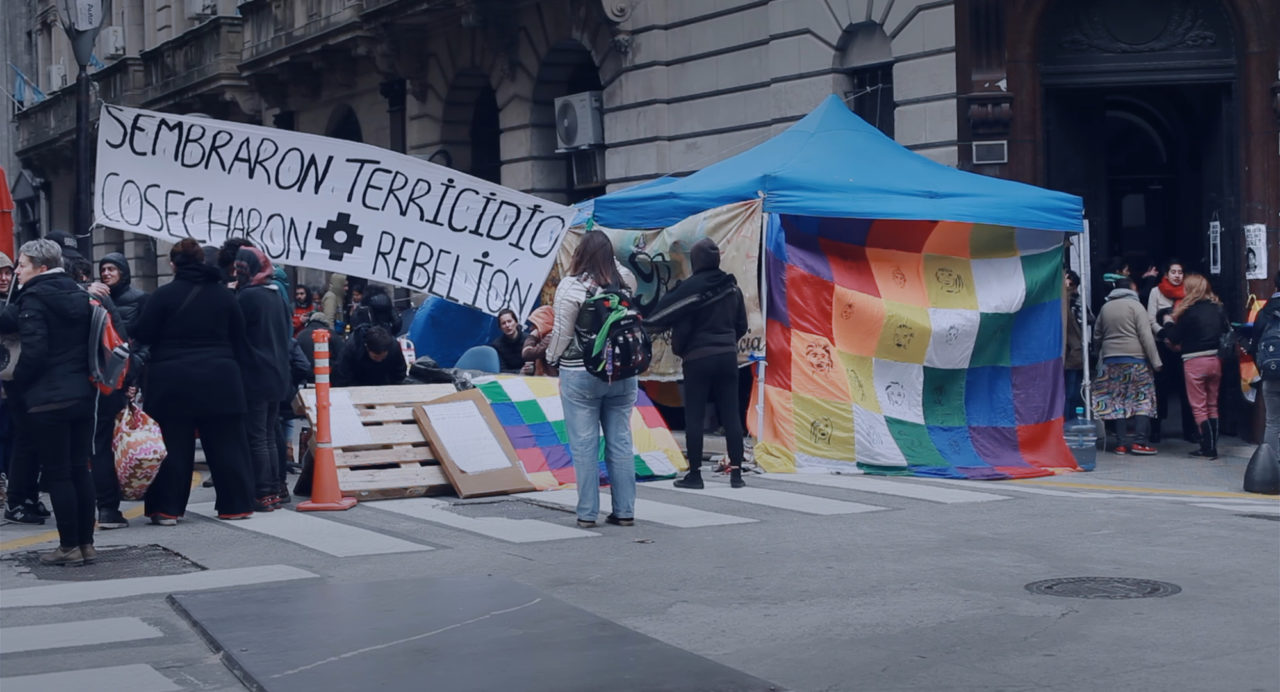 On Friday, September 30 at 7:00 p.m. The rebellion of the flowers, by María Laura Vasquez, a documentary that will be seen during the month of October at the San Martín Cultural Center. Sarmiento 1551, Buenos Aires.

In October 2019, a group of self-convened indigenous women from conflicting territories peacefully occupied the Argentine Ministry of the Interior for 11 days, demanding the end of Terricide in their communities. There they faced the apathy of the State and the indifference on the part of society, but managed to claim the need to recover a way of living where reciprocity and solidarity between peoples and nature is an urgent need.

In October 2019, a group of 23 women from different indigenous nations located in what is now called Argentina, who came from different parts of the country (Formosa, Chaco, Santa Fe, Misiones, Salta, Neuquén and Chubut) peacefully occupied the Ministry of Interior of the Nation for 11 days demanding the cessation of death in their territories. Among them was Moira Millán weychafe Mapuche, activist and defender of Human Rights and nature.

During their stay, these women denounced the environmental terricide and the hired assassins unleashed in the regions they inhabit and the consequences that this brings to the lives of their communities and the population in general. There they were confronted with government apathy and media indifference that made the event invisible. However, her sustained struggle managed to install the concept of terricide in part of society, where she becomes aware of the need to create a new way of inhabiting the earth.

This is an unprecedented event in Argentine and world history: there is no other peaceful takeover of a ministry of these characteristics. The rebellion of the flowers It opens three years after that action to give it visibility.

The director emphasizes that this is not a new struggle, but rather an ancestral demand for land and dignity. «Each scene was an echo within an echo, scenes repeated endlessly for more than five centuries. There the native flowers once again rebelled against 500 years of dispossession and oppression.»

Since I graduated from the International Film and Television School of San Antonio de los Baños, Cuba, I have dedicated myself to historical political documentaries. I have lived in Cuba, Venezuela, I have filmed in Bolivia, Nicaragua and Argentina.
My main subject of research and recording have been the emancipatory processes of Latin America, political projects where they tried to develop proposals that would move away from the neoliberal capitalist model in search of a better society. The themes of indigenous oppression and conquest always appeared in historical research as the beginning of stratification and social genocide, but they were never the central theme in my documentaries.
With the Mapuche weychafe Moira Millán we met through a mutual friend. Moira made a strong impression on me, his presence, his ability to communicate, the spirituality he emanated and the political ideas he poured out exploded in my head like a new and revolutionary revelation. He proposed a different civilizing proposal, from the perspective of the original peoples, and what is more important, from the perspective of the original woman.
At the end of the night she approached me and said looking me in the eyes: You and I are going to make a movie. Yes, I told him, of course. That night we mutually chose each other and began to walk a process of accompaniment and exchange together that continues to this day.
As the bond deepened, I got to know her family and the other indigenous women who share the struggle with her and I began to film with them, not very clear about what the narrative thread of the film was going to be.
When they began to think about peacefully occupying the Ministry of the Interior to make their historically ignored claims visible, I decided to accompany them in the process. So it was that I accompanied by recording the direct action carried out by 23 self-convened indigenous women from territories in conflict, and I was with them the 11 days of the occupation in October 2019. This fact became the central story of the film, and was clearly reflected in concrete situations all the issues, conflicts and struggles that have accompanied the existence of indigenous women since the arrival of the invader. Each scene was an echo within an echo, scenes repeated endlessly for more than five centuries. There the native flowers once again rebelled against 500 years of dispossession and oppression.

He was born in La Plata, province of Buenos Aires in 1976. He studied directing at the International Film and Television School of San Antonio de Los Baños, Cuba. Between Venezuela, Argentina, Bolivia, Nicaragua and Cuba, he has made more than 20 cultural and political-social documentaries and has produced television programs within the same documentary theme. Between 2000 and 2011 he settled in Venezuela, where he worked for La Villa del Cine directing documentary films. He also worked alongside Oliver Stone in researching and collecting footage for the film. south of the border(2010) and for the film My friend Hugo (2014). Since mid-2011 he lives in Buenos Aires. Among his most important documentaries stand out When the compass marked the south (2008); Independence project, the libertarian spirit of a people (2011) Y The 120. The Coffee Brigade (2018). He is currently in the process of editing his documentary In search of Legeryn.

THE FILM AT The San Martin Cultural Center in Buenos Aires:

The value of general tickets is $200 and for retirees and students $150, and they are acquired through tuentrada.com or at the CC San Martín ticket office.