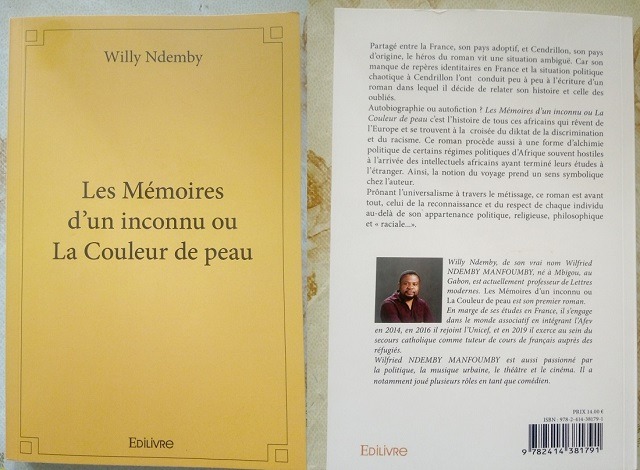 The Gabonese literary landscape was enriched last January by the opus of the young writer, Willy Ndemby. A 131-page fictional novel, “The Memoirs of a Stranger or Skin Color”, published by Edilivre, mixes several themes and highlights issues of immigration, identity, politics and spirituality. This is an African story and the story of Africans dreaming of Europe.

Front and back cover of “Memoirs of a Stranger or Skin Color” by Willy Ndemby. © Gabonreview

Using a character at the same time city, spirit and hero, Willy Ndemby, who thus puts his first work in bookstores, raises in this book published last January at Edilivre, a deep reflection on oneself, on the permanent quest for identity as much cultural than political and religious or spiritual. He places at the center of these writings an adventure highlighting the questions of immigration, racism, integration, return to sources, initiation, spirituality, politics, but also discovery. An approach, he says, which aims for universalism, interbreeding and integrates the theories defended by Léopold Sédar Senghor and Édouard Glissant.

In summary, “The memories of a stranger or skin color” is “the story of all Africans who dream of Europe and find themselves at the crossroads of the diktat of discrimination and racism“. This text “is above all that of recognition and respect for each individual beyond their political, religious, philosophical and “racial” affiliation.

For the author himself, who speaks of a synthetic novel, political issues with France-Africa, identity and immigration are “dvery pressing questions in France“. On the very first page, the reader can read, “…most foreigners were really despised: blacks were reduced to the smell of spices and taken for undocumented; the Arabs considered invaders and thieves; the Asians, on the other hand, cut a good figure because of their legendary smile“.

Willy Ndemby during his visit to Gabonreview, explains that “the question of immigration, although dealt with by authors from the continent, is interesting because it raises the issues of integration and racism, which are very common in France. This is why writers cannot forget this kind of theme in their works; because these are the themes that have given them life experience. And the way to say these experiences is through writing“.

“confuse the issue, create suspense and arouse the curiosity of readers”

Politics, spirituality, history are other themes extensively examined in this work. “I try to establish a kind of correlation between history and immigration and even France-Africa. If we had leaders who take very good care of their country, we would not have had this flight of children from Africa to the UK, to the West. We know the consequences of this», suggests the author who points out that «the systems put in place in Africa are autocratic, dictatorial systems, among others, and ensure that many Africans, who do not find their account and who suffer from increased misery, are forced to think of Elsewhere. And Elsewhere is France, because many have a centuries-old relationship with this country. However, when we get there, we find other contingencies.

From the beginning of the text, the main character is unknown. He is not directly identified. Willy Ndemby specifies that “it is to blur the tracks, create suspense and arouse the curiosity of readers”. It is only at the end that we discover this character who is T., the name of a city.

Faced with the contingencies (racism and discrimination) of this host country, T. a graduate and intellectual left France with his family and a French wife. He has a calling from his native land, Cinderella. On his return, he will be confronted with a political regime hostile to change. But, the call will be ended by a kind of initiation which passes by the historical places of his childhood which he discovers through a guide, a spirit.

T. will face the coup in Cinderella. He will be the spokesman for his people in defense of the oppressed. But everything will be orchestrated by a system: France-Africa. “I know that one day, politics in Africa will no longer be synonymous with war, ethnic conflict, misery, nepotism, financial mismanagement, and especially communitarianism. Politics will have its true meaning, the art of governing“, hopes T. An easy-to-read book in which Cinderella recalls many countries of the continent plagued by bad governance.

Literature: “Memoirs of a stranger or skin color” by Willy Ndemby in bookstores | Gabonreview.com | News from Gabon |