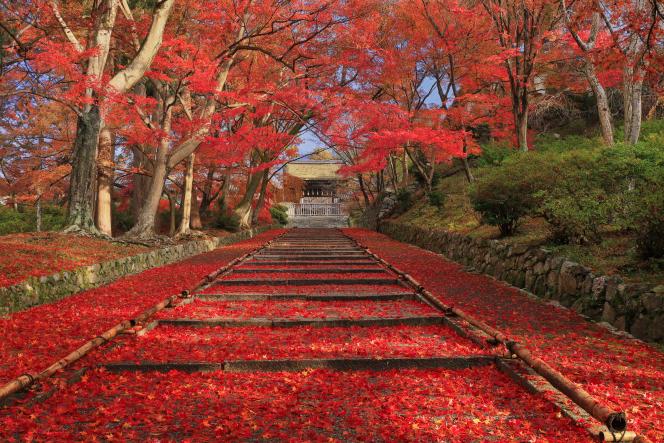 French Clément Sans recently became a Zen monk, ordered under the name of Tozan (“the mountain of the peach tree”). Each month, he sends us a letter that shares with us his reflections and his unique, almost timeless daily life. After two years spent at the Antai-ji temple in the mountains of Honshu Island, he now continues his practice in Kyoto, the former imperial capital of Japan.

November letter. Kyoto is now a red city. Unhooked from the main road escaping towards Lake Biwa, the alley of the temple is covered with a thick layer of maple leaves. While the incense escapes from the windows of the main building, the abbot and his son quickly pass the broom in the garden. The cemetery is cleaned by the faithful whose gaze escapes towards a large landscape of infinite colors, the songs of the daily liturgy seeming to accompany the mountain in the most beautiful of seasons.

Once is not custom, I went to the south of Kyoto, in the small town of Uji, to pay homage to the founder of the Obaku school, a branch of Zen unfortunately too little known, for which I have always had a great tenderness since a meditative retreat with monks of this fascinating current.

Ingen Ryuki’s (1592-1673) birthday is celebrated every year at Manpuku-ji, the institution’s main temple. To name the ceremony, the word jimin is used, a term meaning “the magnanimous spirit and the compassion felt for all things”. If a small ceremony is organized, the latter also serves as a reminder to the monks of their initial commitment, the word jimin also being used during the ordination ritual. My visit to the temple is an opportunity for me to pay homage to a great patriarch of Zen and to question once again the motives that dot my religious journey.

This branch of Buddhism allows us in particular to ask a question that is sometimes overlooked in French-speaking debates: how to qualify faith in Zen, the practice of which seems a priori very bodily and ascetic? Japanese Buddhism is very composite, and there are many schools expressing doctrinal specificities, including within Zen, which cannot be grouped under a single banner.

Read also: Article reserved for our subscribers “The Zen monks, do they contribute to retirement? “: the difficulty of talking about this Japanese practice in France

From the most devotional to the most esoteric school, passing through certain very formal or minimalist practices, all can however claim the same faith, obviously manifested in various forms. It is said in the classical scriptures that there are thousands of doors to achieve enlightenment, the Buddha being like this doctor in front of patients, proposing the right prescription and the right application of the spiritual content according to the situation and the conditionings of the beings presenting themselves to him.

You have 48.59% of this article left to read. The following is for subscribers only.

Zen view of the world: “Spiritual recollection is not an individual practice aimed at personal development”