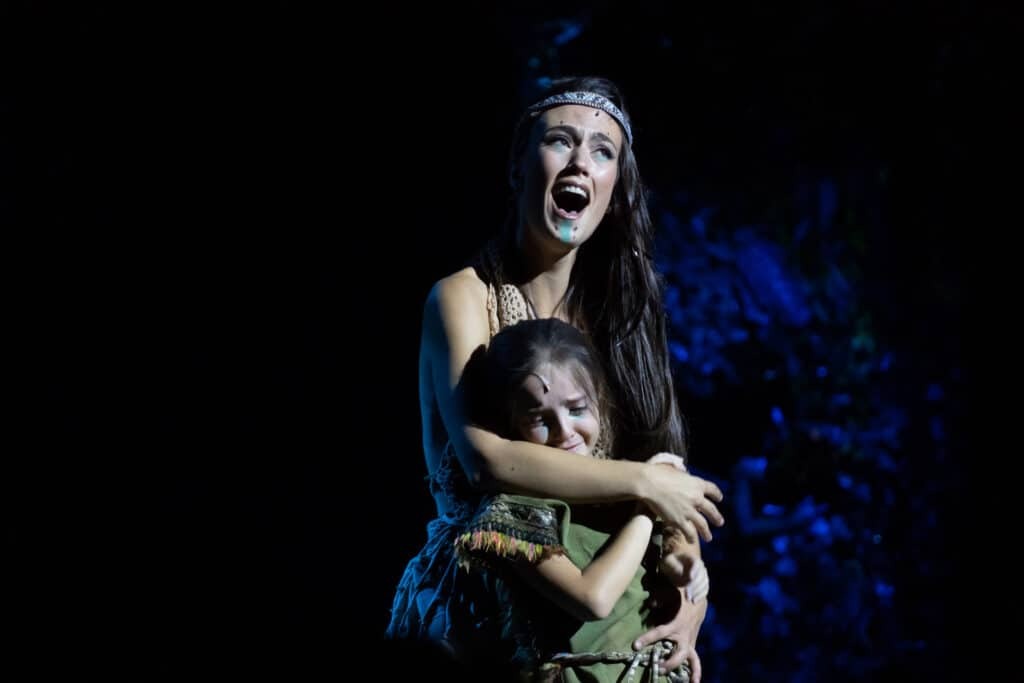 Nacho Cano’s new musical celebrates the meeting between two peoples and the world that emerged from this historic event: miscegenation. The Spanish composer brings to the stage the love story between Hernán Cortés and the indigenous Malinche –lover and interpreter of the conqueror– to praise this woman who was the mother of the first mestizo: Martín Cortés.

“Malinche is the mother of miscegenation and the most important woman in the history of America,” said Nacho Cano at the press conference to present her work. The musical aims to show that the interaction between the Aztec emperor Moctezuma, the indigenous performer Malinche, and the Spanish conquistador Cortés “shaped the world as it is.”

Given the predictable criticism that he will receive for dealing with the issue of the conquest with a positive vision, Cano clarified to the media that the musical “is my vision of the play.” “For us there are no good or bad -he commented-, everyone in this story is good. We go to the soul and the good of the characters and we want to come out as better people, us and those who see it”.

Nacho Cano (Madrid, 1963) was a member of the Spanish group Mecano, along with his brother José María and Ana Torroja. They were a success in Spain and Latin America in the 1980s. Malinche, the musical It is the work to which he has dedicated the last twelve years of his career and it premiered in Madrid on September 15.

In 2021 he released on Netflix a documentary about the process of creating Malinche. Professionals from the world of music and entertainment appear, such as the composers Hans Zimmer or Armando Manzanero, as well as anthropologists and historians from the National Institute of Anthropology and History of Mexico. From the hand of these experts we know different historical aspects of the Mexica culture, of the different tribes subjugated by the Aztec empire and of the irruption of the Spanish in that new world.

Casa de México in Spain has also supported the composer, and Cano himself revealed to the press that he had told the project to Beatriz Gutiérrez, wife of Mexican President Andrés Manuel López Obrador, “and she quite liked it”.

It all started in 2010 in Miami. According to the musician, when he moved to this city he realized that “it was the result of something spectacular that had happened there.” He began to study and compose the first songs, and then he came across the powerful story of Malinche.

Andrea Bayardo plays the role of Malinche in the musical: “For Nacho and his team it was ideal that I be Mexican so that I could tell it from my truth and from my roots,” she told Radio Nacional de España (RNE). “Whoever has a vision of hatred and separation, he does not accept himself as the mestizo person that, today, we all are.”

“The musical sweetens everything, and it’s a good thing to say. We try to capture a story from love and beauty and not so much from separation and drama” (Andrea Bayardo)

Nacho Cano highlights that “the input that we put to the conquest is miscegenation”, something that, he clarified, did not happen in what is now the United States. However, he does not deny that the conquest had its dramatic side, but affirms that “we artists get beauty out of the worst.”

Bayardo agrees that “the musical sweetens everything, and it’s a good thing to say. We try to capture a story from love and beauty and not so much from separation and drama”. The actress is aware that in Latin America there may be very different reactions to this story, but she hopes “that it will be received for what it is, a message of love and union.”

In the musical there is miscegenation at all levels. We find “mixed styles of dance, music, aesthetics and nationalities [del elenco de actores]”, lists Bayardo.

One of the most interesting aspects that Cano wanted to highlight in his work is the identification of Quetzalcóatl (Aztec god of creation) with Jesus Christ. As the character of Emperor Moctezuma narrates in the musical, the prophecies say that the return of this god would mean the end of human sacrifice and the Aztec empire.

The date of Cortés’s arrival on the shores of the continent, the descriptions of the cross on the sails of ships and banners, the hair on their faces, the horses, the firearms… All these signs anguish Moctezuma, who identifies Cortés himself with the god of prophecies.

There is an interesting conversation between the conqueror and the Aztec emperor when the former asks the latter to cease human sacrifice. Moctezuma makes him see that the Christians worship a sacrificed man. “Jesus died to save us all,” Cortés explains. “Then you agree on one thing – Malinche interjects between the two –: that life is born from death”.

The musical introduces us to Aztec spirituality, its cosmological vision and the meaning of human sacrifice. It also shows the role of evangelization, specifically in the scene of the baptism of the slaves who give gifts to Cortés, including Malinche. The documentary, for its part, goes further and explains all the Aztec symbolism that the image of the Virgin of Guadalupe has and that the indigenous people interpreted as a message for them, which accelerated the Christianization of Mexico.

In a moving scene from the musical, Moctezuma confesses: “I have confused the messenger with his lord; Quetzalcóatl is not Cortés, he is Jesus Christ”. This vision that is transmitted, deep and delicate with the faith, contrasts with that of the Church in the character of Father Olmedo. The figure of this friar, especially in the first act, is a burlesque and irreverent caricature that can hurt the sensitivity of the believer.

Making such a documented and complex story into a show lasting almost three hours is a great challenge. The scenery manages to transport us to the jungle, to a Spanish galleon, to Moctezuma’s palace or to an Aztec pyramid. The costumes also contribute to that journey in space and time that takes us from Medellín to Salamanca, to Cuba and finally to Tenochtitlán, the capital of the Aztec empire. However, the script does not flow as expected and the love story lacks strength.

The story revolves mainly around Malinche, Moctezuma and Cortés

In the first act, the stories of Malinche and Cortés run parallel. We know the unfortunate childhood of the indigenous woman and the eagerness for adventure of a young man who grows up hearing about the new world and embarks to discover it. The excessive narrative weight of the aforementioned father Olmedo, cartoonish and somewhat rude, is heavy and repetitive. This detracts from a courteous, womanizing, gold-hungry man who lacks depth as a character. He moves the flamenco number by bailaor Jesús Carmona, who plays Pedro de Alvarado.

In the second act, the show goes back and picks up the pace. The dance numbers are impressive, and the story, which revolves mainly around Malinche, Moctezuma and Cortés, reaches its most interesting moment to the rhythm of very good music. The especially dramatic events of the massacre of indigenous people in the Templo Mayor, ordered by Alvarado in the absence of Cortés, and the subsequent Spanish defeat known as Noche Triste, are not left aside.

“México Mágico”, the anthem of the work, condenses the positive message of the fusion of two peoples and their cultures, embracing everything that has happened in the past as their own. The final song performed by Malinche also stands out, in which Mecano fans will recognize her musical stamp, and whose lyrics want to redeem this woman considered a traitor and celebrate the mestizo reality that emerged 500 years ago.

A country with a mother

Historian Elisa Queijeiro, one of the experts interviewed in the documentary, agrees with Cano that “it is time” to dignify Malinche and argues that Mexico’s wound is that “chosen orphanhood” by turning its back on this woman who was bridge between two worlds. This she claims in her new book, A country with a motherwhich he presented at Casa de México, in Madrid, as part of the events organized around the premiere of the musical.

“The conquest was a painful and bloody birth, like all births, but the result was us,” he emphasized in the presentation of his book. She was accompanied on the platform by the writer Juan Carlos Girauta, the Mexican businesswoman and producer Mati Covarrubias, the director of Casa de México, Ximena Caraza, and the executive producer of MalincheDavid Hatchwell.

One of the arguments that Queijeiro highlighted is the latent machismo behind the contempt for this woman considered by many to be “the Mexican Eva.” A machismo and violence against women that he, he defends, is the great scourge of Mexico.

Andrea Bayardo, the actress who plays Malinche, agreed with this vision of the writer in her statements to RNE: “One of the things about Mexico that I don’t like to admit is that it is still a very macho country, which has many outdated beliefs. I think that the female figure of Malinche has been used a lot to punish women who raise their voices.”

“Malinche”: the musical by Nacho Cano that brings to the stage the history of the conquest of Mexico