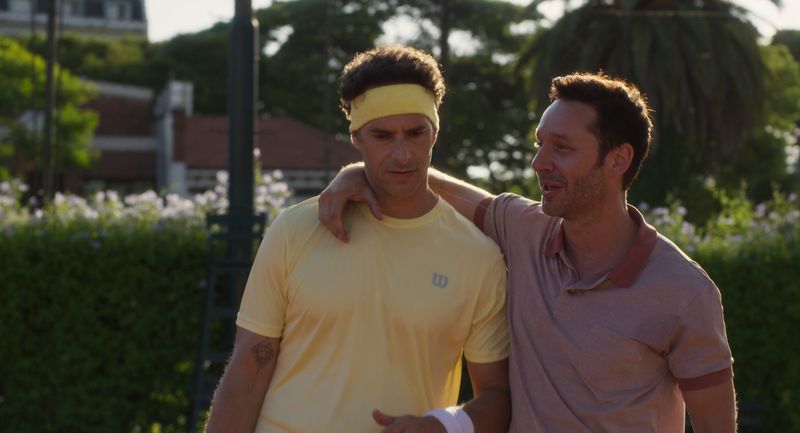 Argentine-Chilean comedy directed by Sebastián Schindel (family crimes) that is added to the global catalog of Amazon Prime Video. Eva (Leonor Varela) and Matías (Lucas Akoskin) are a couple that makes it easier for Bárbara (Florencia Peña) to meet Julián (Benjamín Vicuña), a friend of his who looks like a good prospect until the first suspicions about how real he is appear. his life.

Award-winning debut feature by director Nicolás Postiglione, the film revolves around a man (Alfredo Castro) who sails with his two daughters (Consuelo Carreño, Mariela Mignot) on a lake in the Biobío region. Given his refusal to help three local fishermen, a thriller materializes that resembles a pressure cooker on board a boat. It will arrive on Amazon Prime Video in the days following its passage through alternative rooms.

Matías Bize again investigates the dynamics of the couple but adjusting the focus on a specific and extreme situation: the disappearance in a forest of Lucas, the young son of Ana (Antonia Zegers) and Mateo (Néstor Cantillana). Told in real time and compressed into just 86 minutes, the film uncompromisingly delves into guilt and what it means to be a mother and a father.

Toronto and Guadalajara are some of the international competitions that have screened this dreamlike film, the first feature film by trans-Andean Agustina San Martín, with the participation of companies from Argentina, Brazil and Chile. The film explores sexual awakening through the story of a teenager (Tamara Rocca) who arrives at a point in the jungle where there is talk of the alleged presence of a beast.

in the documentary chicago boys (2015) were Milton Friedman’s own disciples who delved into his training and work during the dictatorship. This time the filmmakers Carola Fuentes and Rafael Valdeavellano set up a kind of second part, in which its protagonists are a woman and a man with disparate origins and experiences who reflect on the model while the country is going through the social upheaval.

Carmen (Aline Küppenheim) completes a trip to her beach house to oversee renovations on the property. Her days take on another kind of vertigo when a priest (Hugo Medina) asks her to take care of Elías (Nicolás Sepúlveda), a young man wounded and persecuted by the Pinochet regime. Intimate debut in the feature film by Manuela Martelli, which was shown with favorable comments at the last edition of the Cannes Film Festival.

The mummy of an Inca boy of approximately nine years who was offered to the gods -discovered in 1954- remains one of the most transcendental archaeological finds in national history. Director Daniel Dávila wonders what he felt on that little road to his death and reconstructs his steps in this debut film that he co-wrote with Elisa Eliash.

Co-production between six countries (Chile, one of them), the debut of the Argentine Juan Pablo Félix focuses on a young man (Martin López Lacci) who aspires to become a professional malambo dancer. In the prelude to participating in a crucial competition, his problematic father (Alfredo Castro) reappears, who urges him to start a trip across the border between Argentina and Bolivia.

Documentary feature film that is installed in an Arica town built on indigenous tombs to present the story of Albertina, a septuagenarian woman who is fundamental in the relationship of the inhabitants with spirituality. After examining that close bond, filmmaker César Borie captures the way the community comes to terms with the woman’s passing.

History, miscegenation and territory are some of the axes that have defined the work of Bernardo Oyarzún, a visual artist recognized in national and international instances (Altazor Award 2011, representative at the Venice Biennale in 2017). His creation and his Mapuche origin are study material for this documentary directed by his nephew, Daniel Díaz Oyarzún, and narrated entirely in Mapudungun.

Boris Quercia leads this Christmas-themed film, the story of a disillusioned young woman (Sara Buzeta) with the lack of support from her surroundings in the face of her dream of becoming an influencer. She goes from disappointment to astonishment when near the end of the year festivities she meets the “Viejito Pascuero de Viña del Mar” (Rodrigo Salinas). Francisca Imboden, Ricardo Fernández and the influencer Ignacia Antonia also perform.

Javiera Contador and Diego Rougier, married couple and creative duo (Soul, Looking for a boyfriend… for my wife), they make their first project for streaming in this film that Amazon Prime Video will launch during the last part of the year. Victoria (Contador) is one step away from getting the promotion she longs for, until a solar storm leaves the world without internet, and she is isolated from it with her two children, Clara and Julián.

Four years after the premiere of Gloria Bell, Sebastián Lelio bursts in with his first movie for Netflix and the second he shoots in Great Britain. The filmmaker of a fantastic woman follows an English nurse (Florence Pugh) who must deal with the strange case of an Irish girl (Kíla Lord Cassidy) who, despite not eating for months, remains in good health and has attracted the attention of locals and tourists.

In theaters and streaming: the films with which Chilean cinema attacks