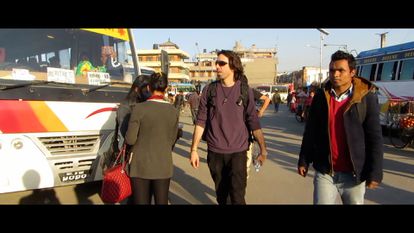 Of Osel Hita Torres Much has been written over many years, as a quick Google search proves. “But they are snippets of a life that has never been told from start to finish. Until now, hardly anyone understood me”, he explains himself at the beginning of November at the offices of HBO Max Spain. His is a life that is unrepeatable. Or perhaps it would be more descriptive to say that theirs are many lives enclosed in the same body. He is the only Western person declared by the Dalai Lama to be the reincarnation of a Buddhist teacher. The platform adds to its catalog a documentary series that bears his name and tells his story.

The Argentine director Lucas Figueroa begins the story with a chapter full of context that places the viewer On a journey that won’t end the way it started. It is the testimony that he discovered when reading the biographical book of Maria, the mother of Osel. An event shocked the world in 1986, when a baby from the Alpujarra was recognized as the reincarnation of Lama Yeshe. This visionary Buddhist teacher decided to blend in with the culture hippy of Europe and the United States during the seventies and eighties, in order to break the cultural barriers that distanced their religious doctrine from the Western world. During his visits to a Spanish commune, he met the marriage formed by María Torres and Paco Hita, who constituted a curious triangle with the French Francois Camus, a young millionaire benefactor of the place. The spiritual leader glimpsed that it would be there where he would return after his death. The birth of one of the couple’s sons, Osel, fit the prophecy and he was transferred to India for his enthronement and training.

Hita grew up in that temple, with lights and shadows that she explains in detail for the first time in this series of four chapters. When he recalls his childhood, he speaks of the feeling of abandonment of him, believing himself sold by his own, which has accompanied him for years. And of the strict codes that he faced in his education as a lama, which led him to have stress, with seven years, living in the middle of nowhere. He couldn’t play sports, he couldn’t watch movies, or eat with anyone. He could only study for hours, between 8 and 16 a day, often texts in Tibetan, Hita recalls. After he came of age, he decided to leave the place to travel the world, get closer to his family and get to know an earthly vision of life that until then he had barely experienced, except in rare visits to the Spanish home. of the. And that’s how he was a teenager in Pachá’s Ibiza, drugs and ravesa homeless man in Venice, a student at prestigious schools in Switzerland and Canada… Now, at 37, he feels at peace with his family and with his religious past, he is a father and an environmental activist, who unites the extreme visions of two worlds, that of Eastern spirituality and Western capitalist hedonism.

“I was living in Argentina when all this happened and, reading Maria’s memories, it seemed like an unlikely story,” says Figueroa, who decided to travel to different countries to meet and record the people who appeared in the text with his camera. After years of work, Hita, voluntarily disappeared from the media for more than a decade, decided that he too wanted to participate in the visual testimony of what is the story of his life.

“That path followed by the protagonists of the documentary series, in which what is bad ends up being good and vice versa, is what I seek for the audience”, comments the director. He does so through two especially fascinating characters, the lama boy turned adult and Maria, a mother with very unusual looks who goes from being judged to being understood. “She, her way of being, make you end up looking at yourself and analyze your own prejudices,” defends the person in charge of the series. In fact, Osel it is “the story of a family in the midst of extraordinary situations”, he continues.

There are so many cultural clashes that it shows Osel, which also questions whether Western and Eastern societies are doomed not to understand each other, no matter how much globalization reaches the world. “There are and will be approaches, but only in very specific matters,” says Figueroa. “I believe that it is possible to share, unify, break taboos, break down barriers… For me it is an honor to be part of that process,” says Hita, who feels that her life has been “an experiment” with which to prove that understanding is possible.

Putting herself in the place of a spectator for once thanks to this project has helped Hita change the perspective of her biography. “The series has helped me a lot to see things objectively in the face of an experience that was so extreme for me. It has been like a therapy, a long learning process”, says the former lama child. In his current life project, Hita gives talks all over the world, also in Buddhist centers of those who have accepted that he deviated from the path that his religion had marked out for him. He presents himself as a leader who keeps learning, not as a guru who knows everything. its foundation Global Tree Initiative compiles the teachings he has received and applies them in the fight to protect the environment. It will be one of the issues that the series deals with in the two seasons more than its creator has planned for it.

“My emotional attachment was with my teacher, the only constant figure in my childhood. I didn’t grow up with my parents, I got to know them little by little. It was difficult for me to have intimacy and communication with them. But for me it has always been easier to understand my parents than they understand me. The first time I saw the finished series, I couldn’t wait for the chapters to end to send a message to my mother and father and tell them that I love them”, she confesses.

10 signs of 'ancestral spirits' and how to know if they are with you
Meeting with Master Sri Akarshana, the "Yogi with a Lamborghini"
Edgar Vittorino: "At Pride, I am the first to go with a banner next to my brother"
Tweet
Share
Share
Pin