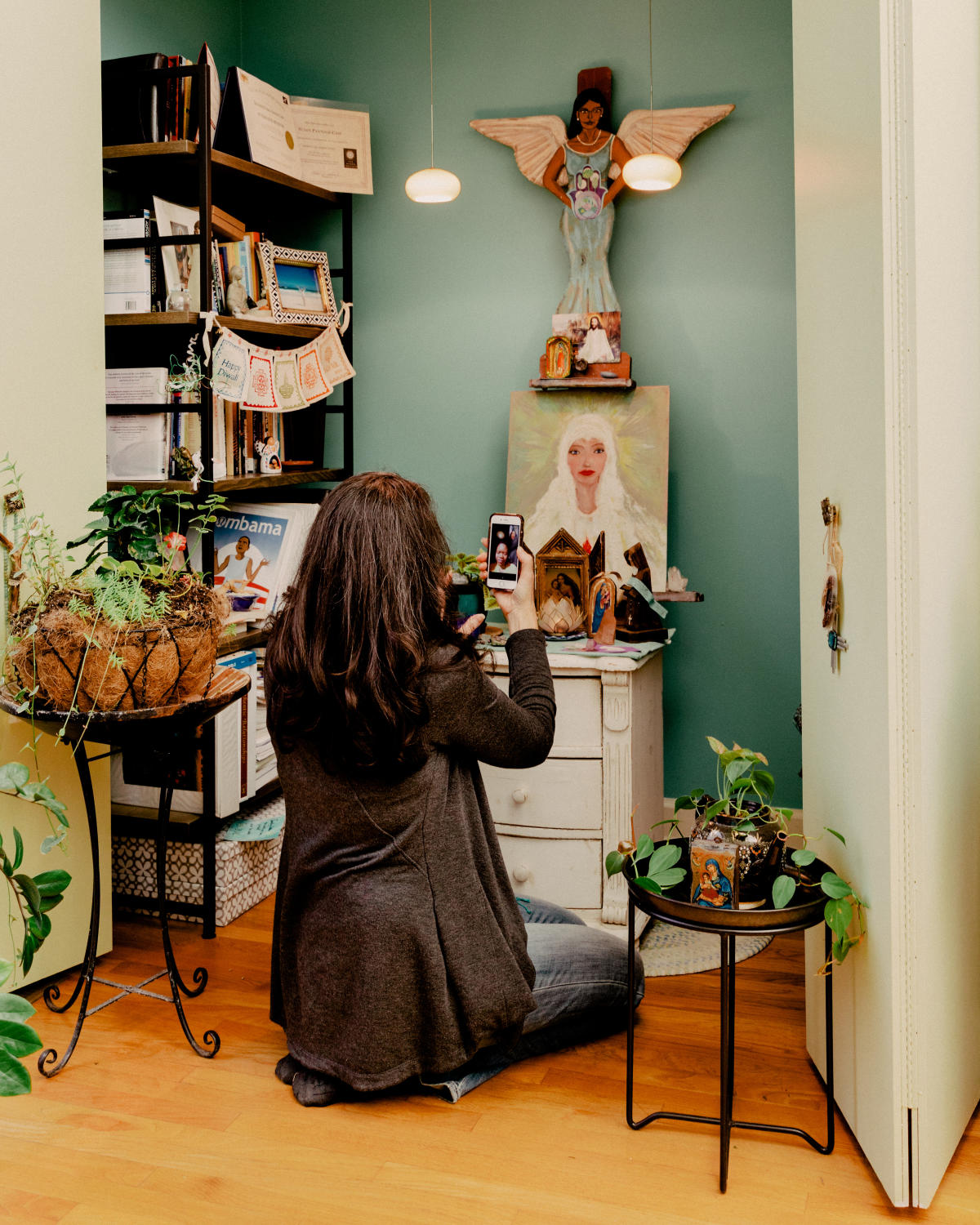 Last spring, after getting divorced, Qadeera Ingram needed someone to talk to. In particular, she wanted to talk about spirituality and the bigger picture of her life.

Although Ingram, a 33-year-old government contractor in Goose Creek, South Carolina, is a Christian, she is not a member of a church. So she hired Susan Pannier-Cass, a spiritual director and ordained minister, to talk about what she was going through, which included raising her 6-year-old son during a pandemic at a time of widespread upheaval.

In some of her virtual sessions, Ingram talked about her dreams, and Pannier-Cass helped her analyze them. In others, Ingram reflected on the elements of the natural world and how they made her feel closer to God. Pannier-Cass encouraged her to “get out of the house” and take off her shoes, Ingram recounted, “putting my feet on the ground and reconnecting with my center and what brings me peace.”

Spiritual companions, also known as spiritual directors, are guides whose purpose is to listen carefully to their clients and help them explore their spirituality.usually without belonging to a specific church.

What they offer is not therapy; According to Spiritual Directors International, a nonprofit organization in Bellevue, Washington, the goal of meeting with a spiritual partner is to take a “significant step toward helping you find your wholeness and balance in life, as well as a sense of connection to that life.” force that could be called God, Allah, the Universe, the Being, that which connects us all”.

The practice has roots in many faiths, most notably the Jesuit strand of Catholicism, but contemporary spiritual directors They come from a variety of religions.

“Most people turn to spiritual guidance for the meaning of everything, however they define it. We don’t define it for them,” explained Seifu Anil Singh-Molares, a Zen Buddhist monk and executive director of Spiritual Directors International. (He clarified that, although the more familiar term is spiritual direction, he prefers “spiritual accompaniment” because it is more inclusive.) “We offer you support in finding your own path to God, if you describe it that way, or Brahman, or Tao.”

“Spiritual, but not religious,” is how 27 percent of Americans define themselves, according to a 2017 Pew Research Center survey. Yet in an April survey by the same center, a quarter of American adults reported that their religious faith had been increased by the pandemic.

For some who are looking for a spiritual connection, this leads to a hybrid method. Alissa Ballot, 65, also a Pannier-Cass client and a retired Chicago lawyer, was already a member of a synagogue when she heard about her spiritual accompaniment at a retreat. She comments that she has gotten to know herself better by writing poetry, a suggestion from Pannier-Cass. She explains that her spiritual direction is helping her become “the me that God had in mind when he created me.”

Lucinda Clark, a spiritual director in Charlotte, North Carolina, said that, in her experience, more black clients, including members of the clergy, began to turn to spiritual direction after the death of George Floyd, and the anger and protests that followed. unleashed as a result of that event.

“That has been one of the main problems,” said Clark, 51. “’How can I operate and work in my ministry in an environment that rejects me, sometimes inadvertently and sometimes on purpose?’ Therefore, some people are coming because they feel hurt. They don’t know how to get ahead.”

Clark, who completed a three-year spiritual direction program at the Charlotte Spirituality Center, became spiritual director after what she describes as “a dark night of the soul” in which certain ideologies of her church were questioned. She came to the conclusion that although her roots are Christian, there are many paths to find God.

From that moment on, “I simply knew that I had to take that path with other people, accompany other people, so they wouldn’t feel alone,” she recounted. “I thought: ‘I don’t know what this thing I have to do is called. I just know I have to.’”

She says that when she discovered the spiritual direction in an internet search, she thought, “This is what I’m looking for!” In her sessions, she often poses questions to help her clients reflect on what they are feeling, from a hard day at work to a disconnect in their relationship with God.

The limits and beyond

Trainings can vary depending on the practitioner’s faith or learning preferences, but certification programs exist through spiritual direction organizations and nonprofit ministries, including the Shalem Institute for Spiritual Formation in Washington, DC.

Spiritual Directors International guidelines indicate that spiritual guides should also have directors to guide them, as well as mentors or colleagues to supervise and follow through on their responsibilities. Fees for spiritual direction sessions are usually handled on a sliding scale, which it can be up to $150 for a 50 minute session. Some directors offer free services for those who cannot afford the price.

The relationship between a spiritual partner and his client is intimate, and as in any type of therapy, it is important that spiritual directors respect boundaries. Some spiritual companions, including Pannier-Cass, have training in social work.

Emily Malcoun, a clinical psychologist in Philadelphia who has worked with a spiritual director, noted that while therapy “can provide specialized support to heal mental health symptoms,” spiritual direction “focuses on your relationship with God or the divine.” through prayer or reflection.

There are those who advocate greater responsibility in the profession. Andree Grafstein, a spiritual director from Avon, Connecticut, described an incident of sexual harassment by a director some 40 years ago in an article she published last fall in Presence, a magazine distributed by Spiritual Directors International. “I look forward to the day when the reality of sexual harassment by a spiritual director is as visible as other forms of sexual abuse have become,” she wrote.

Since the article was published, Grafstein said he has received supportive emails from other spiritual directors. In particular, he is concerned about the need to offer guidance and support to spiritual directors who learn that a client has been sexually harassed or abused by another director.

Clients can be vulnerable, especially since, for some, rejection by an organized religion or prior religious community is what led them to spiritual direction in the first place. Kristabeth Atwood in Burlington, Vermont, spiritual director and former minister of the United Methodist Church, calls herself a pastor to the unchurched. Most of her clients “just don’t identify with the idea of ​​belonging to a traditional or formal religious community,” she said.

Spiritual directors: the new guide of spirituality without religions

THE V EDITION OF THE MADRE FESTIVAL THEATER IN OSTUNI FROM 15 JULY TO 15 AUGUST 2022.
Dans le diocèse de Fréjus
Yes, “The Chosen” is really good ... and it will only get better
Tweet
Share
Share
Pin