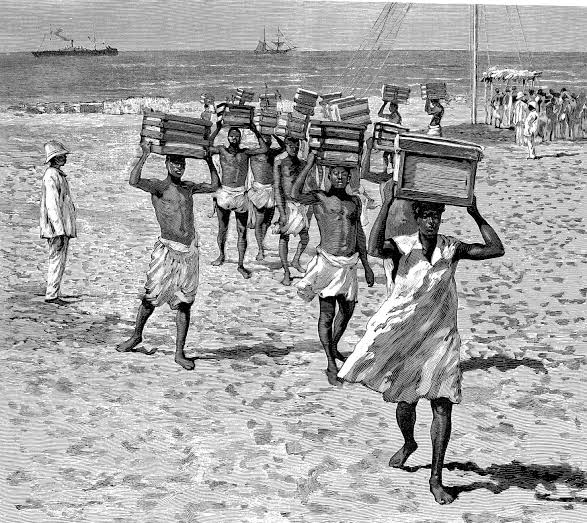 Religion in Cuba is full of mysteries. If you are thinking of traveling to Cuba, you should know that it is a country with a great spiritual tradition. In recent decades, the role of religion in Cuba has been increasing. 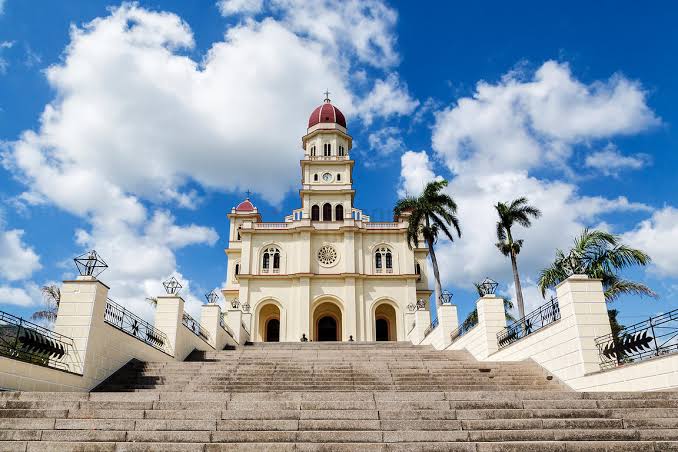 The government of the Revolution was not happy with the influence of religions on the people. Especially when they created distrust towards the socialist system, declared by Fidel Castro. The 1992 and 2019 constitutions recognize the right to religious freedom. Today, many churches and temples in Cuba have close relationships with congregations in the United States and other countries.

The religion of the first inhabitants of Cuba

The formation of religion in Cuba was marked by much suffering. First by the Cuban indigenous people and then by the African slaves brought by Spain. In the year 1492, the Spanish colonizers arrived in Cuba. They met 3 types of indigenous people. Like every culture, they had their own gods and beliefs. 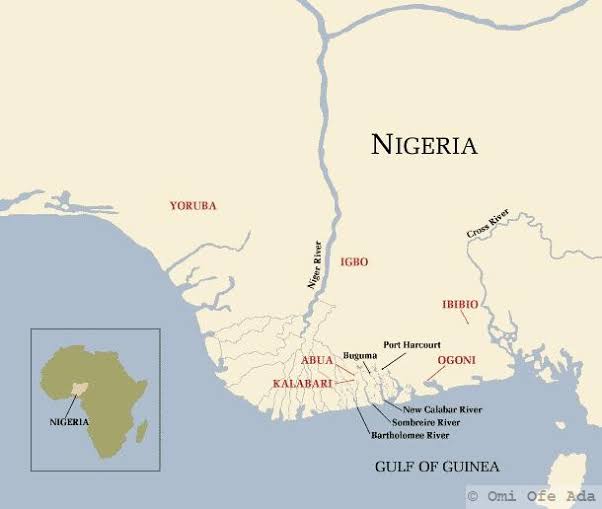 The Indians of Cuba were exterminated, in their vast majority. They were not only physically eliminated, they were also spiritually and culturally crushed.

I always like to remember the story of Cacique Hatuey. This story reflects the fatal impact that Spanish colonization had on the first inhabitants of Cuba.

Hatuey was an indigenous leader. He did not want to obey the orders of the Spanish colonizers. They sentenced him to burn to death. They accused him of “crime” of rebellion against God. They asked him to confess to his “crimes”. This was how the sacred scriptures of the Spanish Catholic empire (The Catholic Bible) indicated. They told him that if he did not do it, then he (Hatuey) would not go to Paradise. The indigenous leader responded with a question: “Are you going to paradise?” The Spaniards responded: “Yes, we are saved.” To which Hatuey replied: “If you go to Paradise, I don’t want to be there.”

Colonization had an enormous impact on spiritual life and the future of religion in Cuba.

This story by Cacique Hatuey shows us the enormous impact that Spanish colonization had on religion in Cuba. 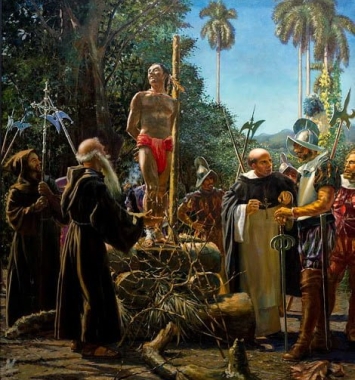 Hatuey’s rebellious and outspoken response meant a lot to Cuban history. Probably, he did not fully understand the Catholic precepts, much less the concept of “paradise” and “hell imposed by the colonizers.”

Indigenous spirituality and religion had its own concepts. Like all religions, it had its own way of dealing with sin, wickedness, or evil. Also the “supposed” payment that the bad actions of one person towards others should have.

The indigenous people of Cuba had their own concepts of “paradise” and “hell” only with other names.

The beliefs of the indigenous Cubans do not have a clear influence on religion in Cuba. But their suffering did have a crucial impact on the spirituality of Cubans. It was a ferocious way of trying to impose an “alien” religion on us, which had a vital teaching that continues to this day.

The Afro-Cuban Religion is an autochthonous and typical religion of Cubans. It arrived with the Africans brought as slaves to Cuba.

It is the religion in Cuba with the most followers. A Cuban saying is well known that says: “Here, those who do not have Congo have Carabalí” which refers to the fact that all Cubans of all races have African aspects and spirituality. 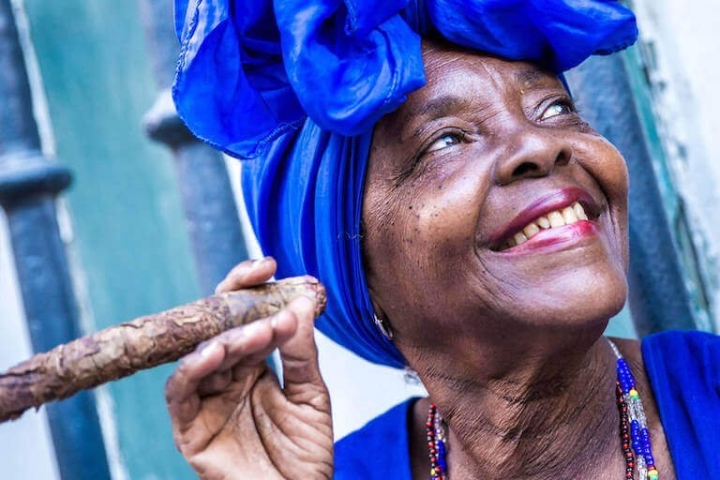 The Afro-Cuban religion has an enormous influence on the daily life of the country. It is interesting how this manifests itself. It has its explanation in the very history of this belief, as an autochthonous and own Cuban religion. This was the result of the religious syncretism practiced by the African slaves in Cuba.

Did you know that very few countries and local cultures have their own, indigenous religions? Religion in Cuba knew how to defend itself against this process. This was thanks to the clever strategy of religious syncretism practiced by Africans.

The syncretism of the Afro-Cuban religion

The Africans brought to Cuba as slaves had their own beliefs. The Yoruba religion is a series of spiritual traditions of the Yoruba people, an ethnic group native to West Africa (mostly from Nigeria and Benin). 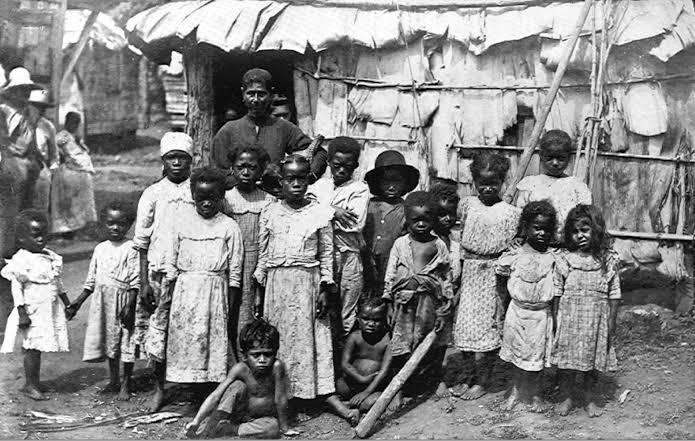 It is a complex of myths, songs, stories and other cultural concepts, which make up Yoruba mythology. Through African slaves, the Yoruba religion spread its influence outside of Africa.

The religious identity of Africans in Cuba did not disappear. They adapted to face adversity. Their culture and religion were attacked from the day they were forcibly uprooted from their homelands. At this moment, the authentic and autochthonous religion of Cuba began to take shape.

Once in the colonized lands, their worship and rituals were prohibited. They knew how to take care of the last and only thing they had left, their Faith and their religion. They did it thanks to the religious syncretism they practiced.

How did they do it then? They agreed in secret. They deceived their Spanish masters, they made them believe that they converted to Catholicism, that they discarded their Yoruba beliefs and that they repented of these … but in secret, they worshiped their deities. Only with their mouths did they mention the name of the Catholic saint, to look good with the masters. But they secretly made signs and their hearts worshiped their Orishas, ​​the gods of their own religion…

The African slave once in Cuba knew how to adapt to the Catholic religion of the Spanish. They were very smart. They knew that if they did not, their religion and their lives were in danger. 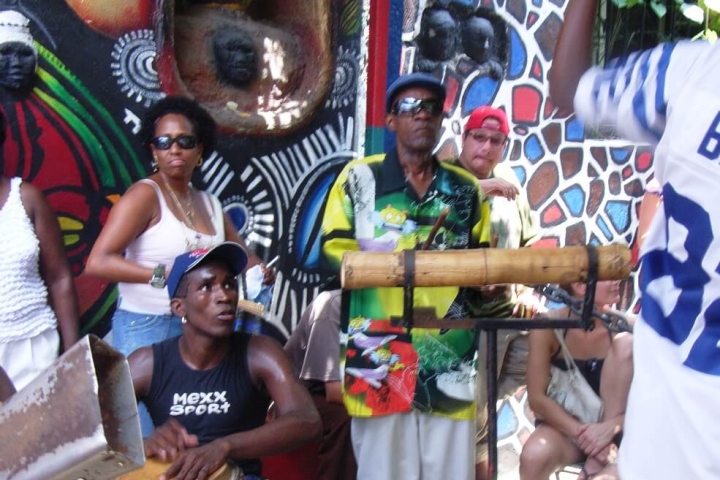 The Yoruba have the concept of a creator, -Olofin-, who can be equated in this aspect with the God of the Catholics. According to the Yoruba belief, Olofin granted all the natural powers to different Orishas, ​​with the authorization to intervene in the lives of men.

The Orishas were mortal beings that for some reason became divine beings. Almost all the Orishas were kings of the Yoruba nation in life. They were great warriors and reformers of civilization. They were the intermediaries, between humans and the Creator.

They bore resemblance to Catholic saints, who were also people deified for their virtues on earth. Which reached the divine grace to perform miracles, to favor men, take care of their health in life and their struggles.

Mixture of Catholic and Yoruba beliefs

Thus, the Yoruba king Changó, owner of lightning, represented with the ax and warrior sword, and the Catholic Saint Barbara, also a warrior, represented with a queen’s crown and a sword in hand, who is invoked when it thunders, are similar. 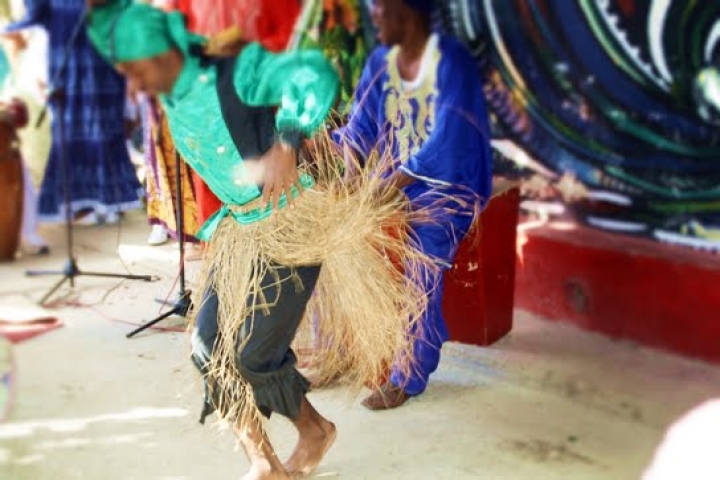 In this way, the African slaves in Cuba knew how to safeguard their Faith and their beliefs. Thanks to this syncretism and his deep Faith. At present, the majority of the believers of the Afro-Cuban religion have faith, both in the Catholic and Yoruba deities. 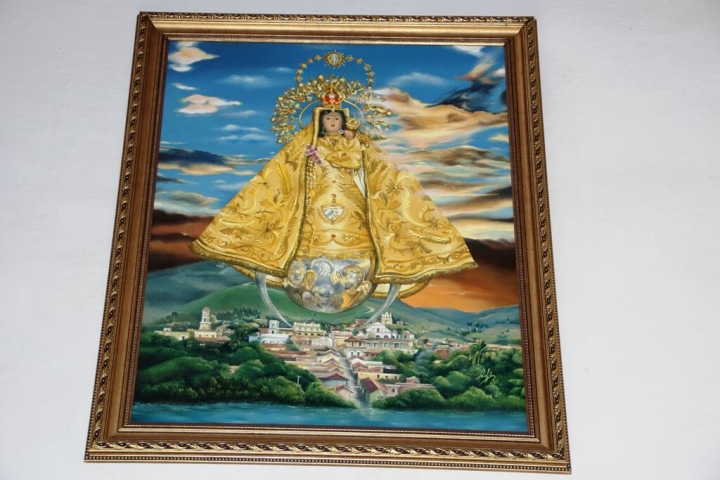 This synchronization of both religions is a faithful reflection of Cuban society. Cuba is a very broad mixture of traditions, cultures, religions and spirituality. Many Cubans have pictures of Catholic saints on the walls of their houses. In some excursions you can have the opportunity to see it. We offer activities where you come into contact with the daily life of families in Cuba.

Ceremonies, rituals, music and dance of the Afro-Cuban religion

The ceremonies of this religion in Cuba take place in the houses, instead of a public temple or a church. To honor the Orishas, ​​practitioners create altars or “thrones” within their homes, sacred spaces that present these powerful beings in majestic splendor. 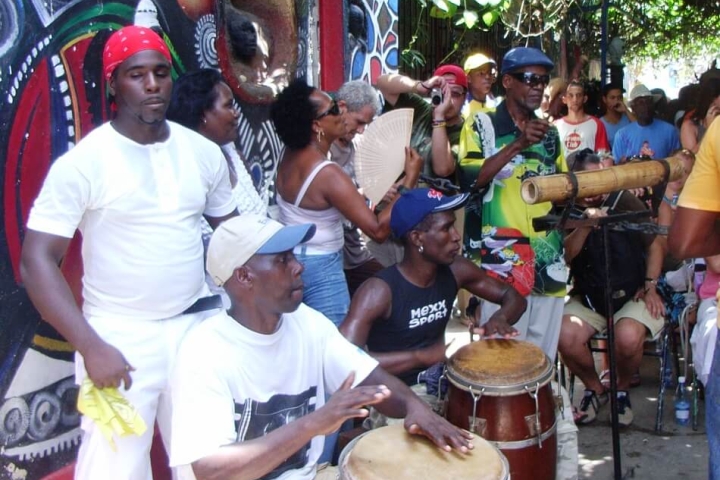 Sometimes they come to have ecstasy with the dance, together with the sound of the drums and the energy of the place, which little by little reaches a climax… in the Afro-Cuban religion this is known as “possessed by their dead or saints”. Popularly it is said to him: “the dead man or the saint was mounted”. Which means, that the person is possessed by a deity.

They behave visibly differently, like. They begin to speak in tongues. Sometimes they approach visitors (practitioners or not) and in that state of possession, they make revelations, prophecies or divination.

What is “to become a saint” or Yabó

On the streets of Cuba, especially in Havana, you can sometimes recognize words like godfather, godmother or godson. Surely you will also see men and women, dressed completely in white, with colorful necklaces and bracelets on their bodies.

These characters in white are popularly known as yabós or people who “became” saints. They go through a rigorous process of consecration, to become santeros. To achieve the maximum bond with their guardian angel, the saint who protects them. 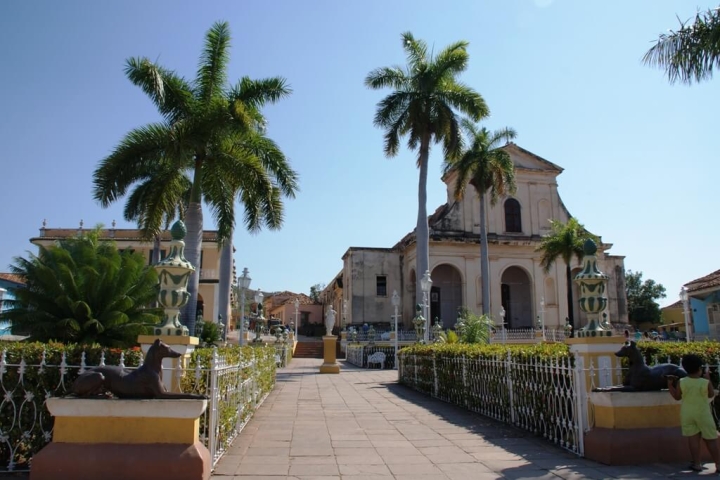 The reasons why a person decides to be Yabó or become a saint are varied. Some do it for health reasons or when the saint or deity tells them to. Others to avoid possible problems, because they want to have a spiritual guide or protection. It also happens that when it belongs to a religious family, it is done by tradition.

This consecration lasts for a year, during which the person wears only white clothing. The underwear, the shoes and also his head are covered in white.

At present, consecrations really vary, depending on personal economy. They are expensive, instruments, animals, clothing, food of all kinds and a long list that varies according to the saint or deity are required. It is very interesting to note that, in most religious ceremonies, people of African descent have a greater role. I mean the musicians, singers, those who dance and sing. Although it is true that the believers and followers of the Cuban religion come from all races.

Like any religion, it always has critics, inside and outside its own bosom. There is always some truth in all reproaches. As in any religious system, there are scams and deceivers. The truth is that his practice continues to grow. Not only in Cuba, but also in various countries of the world. 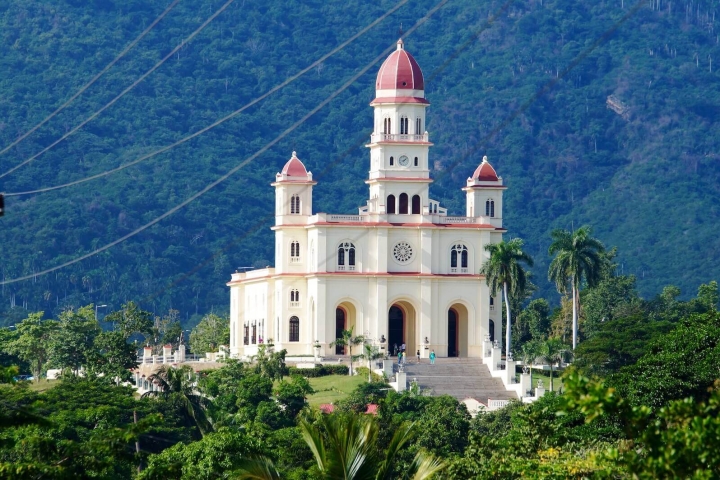 Cuban Santeria has survived as an indigenous religious system. It preserves its magical-religious customs, traditions and practices. They are a heritage of the Yoruba Religion of African Slaves.

This process of formation of religion in Cuba is a reflection of the very identity of Cubans. His struggle to take care of the religious traditions of Africans. Cubans have an enormous capacity to coexist with other religions and cultures, without losing their identity. They love their customs and traditions, they never leave behind their music, their roots, their traditions and of course their ORISHAS!

The birth of the Afro-Cuban Religion: Origin, Syncretism and Devotion of an unbreakable People