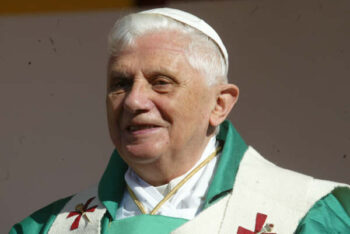 Pope Ratzinger’s resignation is linked to a singular coincidence for me: for a strange coincidence on the morning of 11 January 2013 in which he resigned I was called to commemorate the day of remembrance in the Tuscan regional council, an honorable task but a somewhat ritualistic (and I don’t like ritualism), which I had carefully tried to make less obvious by recalling, for better or for worse, the welcome received by the Adriatic refugees in my land. About halfway through the speech I noticed in the audience, made up of advisers and authorities, an unusual excitement, a buzz that I was unable to comprehend until the end of the commemoration. Someone had intercepted the news of his resignation on his cell phone and, as soon as I got out of institutional robes, I realized that I had started talking to a Pope, and ended up without one. From the seasoned members of the Regional Council, some of whom I had known for some time, I received the most diverse and sometimes irreverent explanations of the gesture, but none convinced me. I must admit that I have not yet found any really convincing ones, assuming however that a single factor must necessarily weigh on a personal decision, even if taken by a public figure.

Quite different was the spirit with which one afternoon in April, eight years earlier, I had received the news of the election of pope Ratzinger to the papal throne. It was the year 2005, in which I deluded myself that in the sphere of politics, as well as of spirituality and culture, there was room for a return to order after the excesses that had followed, the initial hopes having fallen, the end of the war cold. At the head of Italy was the center-right, which governed decently, in the United States the era of Bush Junior continued between lights and shadows, in France Chirac had been elected in the second round after Jean-Marie Le Pen had humiliated the candidate of the left. Putin seemed capable of freeing Russia from the kleptocracy established with Yeltsin and had not yet broken ties with the West, nor had the West broken them with him. In Italy, the success of Pansa’s books on the “blood of the vanquished” seemed to question the resistance vulgate even among the general public, and the disruptive teaching of Oriana Fallaci led us to reflect on the dangers entailed by migration policies. The season of the “devoted atheists” was in full swing, despite its ambiguities, which in Italy had its incarnation in the then president of the Senate Marcello Pera.

The accession to the throne of Peter of Pope Ratzinger, the man who as prefect for the doctrine of the faith had defended non-negotiable values ​​in matters of morality, seemed to exclude any rift with the previous pontificate.

On the political field, there was no shortage of disillusionment, partly due to the inadequacy of some centre-right leaders – starting with one Chirac, great mayor of Paris in the 1970s as well as mediocre president of the Republic – and due to the increasingly heavy influence of strong powers planetaries on national governments, and even on supranational institutions such as the Catholic Church. Pope Ratzinger himself, from the very beginning of his pontificate, was the object of a ruthless war, made up of misrepresentations, ungenerous accusations, gross allusions, threatening pseudo-revelations. Pope Benedict9 XVI, who did not have the charisma of his predecessor, but was clearly superior to him in terms of theological culture, was immediately the target of a crossfire, and I must say that the jokes in the Manifesto about the new pontiff, the “German shepherd”, were not the worst, as was the poster of “Evil” which when John Paul I died after a few days of his pontificate entitled “The pope is dead again”.

Soon, unfortunately, the pasquinades were followed by the stabbings. The barrage began with Franca Rame’s insinuations about the recruitment of the very young Ratzinger in the anti-aircraft artillery in Germany, to which the great Nazi historian Joachim Fest responded in an exemplary way. But he continued with far greater bullets: the accusation of having protected pedophile priests, or of not having contributed to their indictment, the alleged revelations about his brother, who, as was the custom at the time, as conductor of the Regensburg Cathedral Choir , had given a few blows to the boys of his Schola Cantorum. There were even aesthetic considerations on his attire: Eugenio Scalfari branded him as a “cosy pope” in one of his articles, probably convinced that he was the real pope, and since then his every silence or every affirmation, even if it was a matter of not presenting the use of condoms as an antidote to Covid (as if a pontiff had to be a traveling salesman of the Hatù), became a source of fierce criticism. His speech in Regensburg, which was intended to represent an openness towards Islam, was misunderstood, due to a quotation that was not meant to be consensual (a sort of reply to the falsification of the EMS dispatches) nor the attempt to welcome back into Church followers of Lefebvre turned out lucky. And this was not due to the pontiff’s fault, who showed his willingness by revoking the excommunication in the first place, but due to the doctrinal stiffening of the new recruits who came out of the Ecône seminary, this “Port Royal, l’intelligence en moin”, as defined, not entirely wrongly, a French cardinal. The anti-Semitic outing of one of the bishops consecrated at the time by Monsignor Lefebvre, shortly after the remission of his excommunication as well as the other members of the Society of Saint Pius X, did not help a reconciliation that would have done the good of a Church, above all dramatically short of vocations. The rest is all too well known, with the scandal of the Vatican finances and, as I have already mentioned, the reports of cases of pedophilia in the Church.

I don’t want to go into the merits of dramatic and painful issues that demand respect, even if I instinctively distrust complaints filed sometimes thirty years after the alleged harassment and accompanied by requests for millionaire compensation. Many accusations turned out to be unfounded, such as those which, however, due to a conviction in the first instance which turned out to be unfounded and persecutory and subsequently annulled, led Cardinal George Pell to prison in Australia. I limit myself to hypothesizing that Pope Ratzinger was the victim of a settling of scores within the Anglo-Saxon and Protestant world, a settling of scores postponed for a long time until his predecessor, a charismatic figure who had played a role instrumental in the crisis of the Soviet bloc and had fought the theology of liberation in Latin America. Already after the fall of the Wall, the papacy was no longer an irreplaceable “moral arm of the West”, but the prestige of John Paul II and his historical merits had prevented frontal attacks against him and his Church. With pope Ratzinger many hesitations disappeared. He had the ungrateful role of the lightning rod, even though he was the first to publicly denounce the pedophilia scandal in the Church and he was certainly not to blame for a certain “easy finance” in the shadow of Peter’s throne. The hatred of the LGBT lobby, which in those years was imposing its hegemony in the media, against a pope who condemned ethical relativism, did the rest. And as if all this weren’t enough, a faithless butler also set about damaging the image of the pontiff. Not because he had revealed unmentionable secrets, but more simply because a head of state (and the Pope is also this) surrounded by unfaithful servants betrays his own weakness.

With all this, the Ratzinger enigma remains and I believe will remain for a long time without a solution, except for a leak of documents from the Vatican Secret Archives: now everything is to be expected. So many explanations do not there explanation and it is not easy to understand the reasons which led to a disruptive choice such as the resignation of a man steadfast in his convictions, tried physically but no more, at the time, than today’s pontiff, certainly not an advocate of novelty in the exercise of pontificate, indeed faithful to tradition in the liturgy as in clothing, It is indisputable that Pope Ratzinger did not have the temper of a fighter like his predecessor, that he was a professor and not, in a good sense, a great actor, that he reluctantly accepted the the results of the conclave which made him Peter’s successor are equally undoubted. And it is probable that at the moment of acceptance, when there would have been time to renounce in accordance with tradition, he would never have expected the concentric attack he suffered from the beginning of his pontificate. But the decisive factor for which this good, honest man, a lover of good books and good manners, endowed with a culture of other times and an esprit de finesse foreign to his adversaries, may have made the “grand refusal”, we can just imagine it. It could have been the awareness of the existence of a supranational soft power superior to conclaves, parliaments, democratically elected governments, and capable of shooting even the Holy Spirit. A power that from soft is capable of transforming into hard if necessary, as happened during the pandemic. But I won’t go further: I wouldn’t want to be accused of conspiracy, because I’m not (fortunately) like Pasolini and I can’t afford to write “I know, but I don’t have proof”.

In the meantime, I cannot help but pay humble and devoted homage to the man who perhaps could have saved the Catholic Church, not by transforming it into an NGO (and perhaps into a GMO), as his successor sometimes seems to do, but by rooting it in its tradition. His values ​​are in his spiritual testament now spread all over the world. His funeral will be celebrated on January 5 next: funeral of a pontiff or funeral of the Church?

In Molfetta the "Christmas of wonders": the program of events
MET
Lost horizons, Ispica pays homage to the immortal genius of Battiato
Tweet
Share
Share
Pin