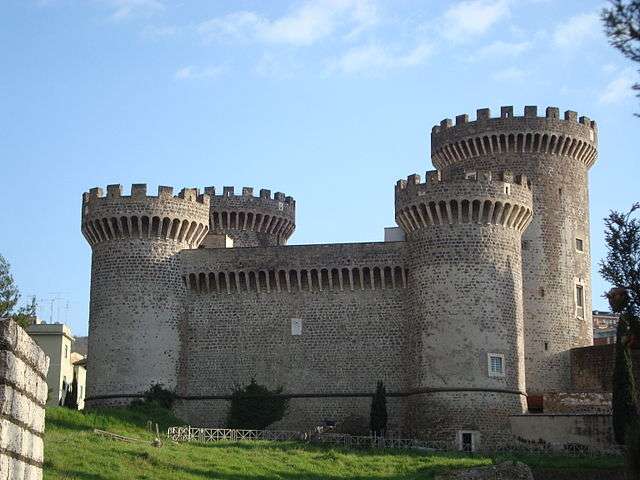 In the surroundings of Rome there are two other places with Ignatian memories that are worth visiting: Frascati and Tivoli.

Frascati was the Rocca dei Papi. In this place in August 1538 the Spanish saint met Pope Paul III. It was a long audience of at least an hour and the two spoke Latin talking about the accusations that had come to the Pope from the slanderers of the Jesuits. The Saint was convinced that in order to preach to the faithful it is important “to have a good reputation, not only before our Lord, but also before the people, and that there are no suspicions about doctrine and behavior”.

The Pope therefore decided that the trial should take place, it had in fact been interrupted, and it was thus that the fathers’ declaration of innocence was reached so that they were able to continue their preaching free from the burden of slander.

Then there is Tivoli and the Rocca Pia, the fortress built by Popes Pius II and Alexander VI. Right here Paul III gave oral approval to the Society of Jesus in 1539.

Thanks to the help of a relative of his, Antonio de Araoz, Saint Ignatius had sent to Cardinal Gaspare Contarini the first version of the Formula of the Institute, the so-called “Five Chapters”, accompanied by the judgment of the censor appointed by the Pope. It was a Dominican Tomaso Badia, who defined life from the company of a “pious and holy” kind.

The cardinal’s reply arrived on September 3, 1539: “Today I met our Lord (the pope) and, in addition to reporting your petition to him, I read the Five Chapters in full to His Holiness, which he liked very much and which he approved and confirmed kindly. On Friday we will come to Rome. . and the order will be given to draw up the short Rocca Pia in Tivoli. Here Paolo Ill approved the Rule of the Jesuits in 1539 the bull “.

Instead, more time passed, about a year, before the Regimini militantis Ecclesiae bull was issued. It seems that Paul III exclaimed: “Here is the Spirit of God!” And that the Company would reform the Church.

Ignazio in Tivoli in 1548, was also a mediator of peace between the city and the nearby town of Castel Madama. The saint spoke to the most influential people of the two localities and obtained that they submit to the arbitration of Cardinal Bartolomeo de la Cueva.

Tradition has it that Ignazio was a guest of the noblewoman Alabella Brigante Colonna, at the Trivio. This was the occasion when the Spanish priest Don Luis de Mendoza offered the Company a church with a small house and a little garden nearby. A place “very graceful and suitable both for retiring sometimes in the quiet of contemplation, and for exercising charity towards the inhabitants of the place and of the neighboring villages”. The church was dedicated to Santa Maria del Passo.

Ignatius took possession of it on September 8, 1549, celebrating the feast of the Nativity of Mary with Mass and a sermon. And it was Don Luis who invited everyone to “spiritual and corporal refection”.

The Rome of Sant’Ignazio, even Tivoli and Frascati are places of spirituality