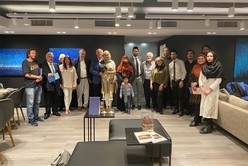 The Supreme Pontiff of the Catholic Church blessed what he considered a “necessary initiative of dialogue and encounter” in the context of a world where men have not stopped fighting like Cain and Abel. The Holy Father expressed his enormous pain and concern for the war that is taking place in Europe, just when it seems that humanity is finally leaving the Covid 19 Pandemic behind. “It should have taught us and made us aware of the understanding that we are all part of a one boat and one humanity.

The Pope considered the vision of the confraternity very opportune, in relation to its transversality

In an extensive and warm audience that lasted well over half an hour, the Pope received the founders of the brotherhood Miguel Steuermann, the director of Radio Jai and Imám Marwan Gill, president of the Ahmadia Muslim Community in Argentina, who were accompanied by Rabbi Orthodox, Saul Bonino, from the Chafetz Chaim community and Imám Atal Tariq, the leader of the Ahmadia Community in Italy. The visitors commented to His Holiness how the initiative arose from the Radio Shalom-Salam program, Jewish-Muslim dialogue, which they have been developing on Sundays for more than a year and a half, and how from there, they motorized joint solidarity activities for the society as a whole. The Pope pointed out “That is the way, to do things together, not arguing”. He recalled how his encyclical Fratelli Tutti (All brothers) came about, as the continuation of the historic document Sulla, on human Fraternity, for World peace and coexistence in common, which he wrote with the Grand Imam of Al-Azhar, Ahmad Al-Tayyeb in Abu Dhabi. “We had a very formal meeting, when we concluded it I asked him what I had to do next and I invited him to have lunch together, from that lunch the friendship and the document began to take shape,” he said.

In this sense, the Pope considered the vision of the brotherhood to be very opportune, in relation to its transversality, where it is made up of people of both confessions and not by institutions. The director of Radio Jai, Miguel Steuermann emphasized that there are no directive commissions, no institutions, no hierarchies, but Jews and Muslims with values ​​and a shared vision. Imam Marwan Gill, who brought a personal letter from the Khalifa His Holiness Mirza Masroor Ahmad, highlighted the Ahmadia community’s postulate “Love for all, hate for no one” and the common quote between both religions that states that “he who saves a life saves humanity and whoever destroys a life destroys humanity.”

Among the many teachings, His Holiness pointed out with admirable humility “that it should not be believed” and that each religion must fight against those extremists who profane it in its name.

For his part, Rabbi Bonino told the Pope about his task as prison chaplain, in which religious collaboration becomes indispensable. The Pope, who is particularly sensitive to inmates, commented that every Sunday he calls a prison to speak with them. His visit to a penitentiary center in Rome is remembered where he performed the customary washing of the feet of prisoners on the eve of an Easter. 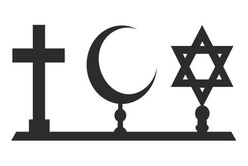 The crucifixion of Jesus in the three monotheistic religions

Visitors consulted about the meeting pointed out that it was particularly relaxed, that they found an extremely jovial Pope, informed about absolutely everything, with his usual good humor and concerned about the world and an Argentina that cannot get out of its fights and confrontations. The Supreme Pontiff pointed out that well understood religions, from a genuine spirituality and respect for the individual, are not the problem but part of the solution.

The Pope: if weapons were not made for a year, world hunger would end
"Tell the Church about today's school"
Religious tourism, art and rural tourism, Bishop Busca: "Coming together to optimize opportunities"
Tweet
Share
Share
Pin