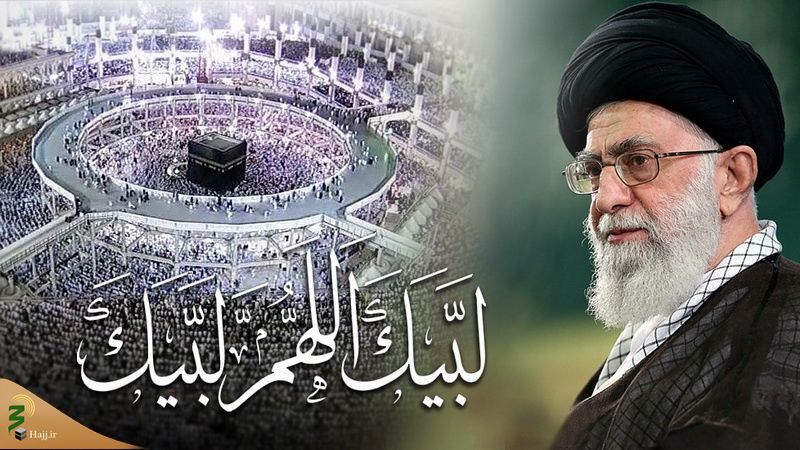 Iqna – Below is the complete message of the Supreme Leader of the Islamic Revolution, Ayatollah Seyyed Ali Khamenei, addressed to the faithful on pilgrimage to Holy Mecca for the Hajj rites and to the entire Islamic Ummah

In the name of God, the Clement, the Merciful

And praise belongs to God, the Lord of the two worlds, and may God’s greetings go to Mohammad, the Chosen One, his pure progeny and his sincere companions.

We thank the Wise and Invincible Lord, who once again made the auspicious season of the Hajj (the Islamic pilgrimage / ed) an appointment for the encounter between the various Muslim peoples; a path that opened Grace and Mercy on them. The Islamic Ummah is once again able to observe its unity in this eternal crystalline mirror, turning its back on the reasons for discord and divergence.

Unity among Muslims is one of the two pillars of the Hajj, this religious practice full of secrets, and if it is joined by the other column or the Dhikr (the remembrance of God / ed) and spirituality, it can lead the Islamic community to apogee of dignity and happiness, and make it the example of the Koranic verse:

Power belongs to Allah, His Messenger and believers[1].

The Islamic pilgrimage is the combination of these two elements, one political and one spiritual; and the Islamic religion itself is a magnificent amalgam of politics and spirituality.

The enemies of Islamic peoples, in recent history, have made a considerable effort to weaken these two elixirs of life of our peoples, namely unity and spirituality. They weaken spirituality by spreading the Western lifestyle: empty, devoid of spirituality and inspired by the myopia of materialism, and unity challenge it with the spread and intensification of false reasons for discord, such as language, color, l ethnicity and geography.

The Islamic community, which has as its small representative those who participate in the symbolic ceremonies of the Hajj, must oppose all this with all its essence. In other words, he must strengthen in himself the remembrance of God, work for God, reflection on the word of God, trust in God’s promises, and on the other hand overcome the causes of differences and tares. What can be said with certainty today is that today’s conditions in the world and in the Islamic world are more favorable than ever for dedicating oneself to this valiant effort. In fact, first of all, today the elite and a good part of the popular mass, in Islamic countries, has rediscovered its great spiritual and cognitive richness, recognizing its value and importance. Today, Liberalism and Communism, the major achievements of Western civilization, are no longer as attractive as they were 100 or 50 years ago. The plutocratic democracy of the West today faces big question marks and Western thinkers admit that they are in a state of practical and ideological bewilderment. In the Islamic world, young people, thinkers, men of science and religion, observing this condition, have understood the value of their own spiritual heritage, giving life to new policies in their own countries … and this is precisely what Islamic awakening that we have always remembered.

Second, this Islamic awareness has given birth to a miraculous phenomenon in the heart of the Islamic world, which has seriously undermined the imperialist powers. This phenomenon is called “Resistance” and is in fact the expression of the strength of faith, of Jihad (the sacred Islamic zeal / ed) and entrustment (to the Lord / ed). It is the same phenomenon that also occurred at the dawn of Islam and for which this verse was inspired:

They said to them: “They have gathered against you, fear them.” But this increased their faith and they said: “Allah will be enough for us, he is the Best of protectors.” They returned with the grace and favor of Allah, they took no evil and pursued his pleasure. Allah possesses immense grace.[2]

The scenario of Palestine is one of the theaters of this incredible phenomenon, which has caused the aggressive and threatening regime of the Zionists to stay on the defensive, imposing on it countless political, economic and security problems. Other brilliant examples of this phenomenon can be seen in Lebanon, Iraq, Yemen and other points in the Islamic world.

Third, today the world can see a model of success and a glorious example of Islam’s political power and sovereignty, namely Islamic Iran. The stability, independence, progress and dignity of the Islamic Republic constitute a truly grandiose event full of meaning and attraction that can awaken the thoughts and feelings of every Muslim.

The lack of capacity and the sometimes wrong work of us servants of this system has delayed the achievement of all the auspicious consequences of the creation of an Islamic government, but it has never been able to stop the spiritual and material progress and has not made shaky solid foundations of this system, based on principles.

At the top of the list of these fundamental principles is the sovereignty of Islam in lawmaking and law enforcement, support for popular vote in major national issues, complete political independence and the rejection of submission to unjust powers. And it is these same principles that can unite Islamic peoples and governments, and unify and compact the world Islamic community in its positions and cooperation.

These are the fertile ground and the factors that have characterized the current favorable condition of the Islamic world for unity. Islamic governments, religious and scientific elites, independent thinkers, and young people in search of truth must think more than ever about the exploitation of these favorable conditions.

It is natural that the imperialist powers, and more than all America, are worried about this phenomenon of the Islamic world, and that they use all their tools to fight against it … and in fact today it is like this: they use their media empire and their soft power, they try to create and intensify wars by proxy, they use temptations and political espionage, threats, they try to corrupt …

All of this is being used by America and other imperialists to divert the Islamic world from its path of awakening and happiness. The criminal and evil regime of the Zionists is one of the tools of this policy in our region.

With Grace and Divine Will, these efforts, more often than not, have had no success and the imperialist West is increasingly weaker, in the sensitive area in which we find ourselves, and lately also in the rest of the world. The bewilderment and failure of America and its criminal accomplice and occupier is clearly visible in the region and can be seen in the events in Palestine, Lebanon, Syria, Iraq, Yemen and Afghanistan.

On the other hand, the Islamic world is full of cheerful and motivated young people. The greatest capital to build tomorrow is to believe in yourself and it is something that is seen today more than ever in the countries of the Islamic world, especially in this region… we all have a duty to protect and safeguard this capital.

In spite of this, one must not overlook even a moment the deception of the enemy. We must keep away feelings such as pride and recklessness and increase our commitment … and at all times, we must turn our attention and our prayers to the Wise and Powerful Lord, invoking his help.

Participation in the ceremonies and rites of the Hajj is a great opportunity to entrust oneself to God, to pray, reflect and decide. Pray for your Muslim brothers and sisters all over the world, and ask the Lord for their success and victory. Also include in your prayers the request for divine guidance and help for this brother of yours.

And may God’s Peace and Mercy be upon you