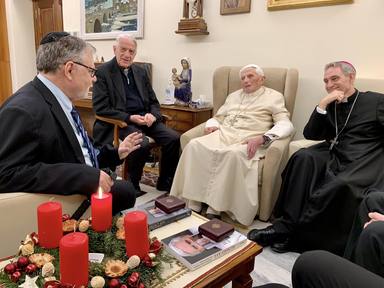 “The Pope Benedict XVI He said that he was aware that his charisma and potentiality were a good presentation of the Christian faith in the world and in today’s culture. ANDthere was his strength. He tried to use this force in his pontificate and in general, in his work to serve the Church and humanity as a young man.”, with these words was expressed by the former director of the Vatican press office, Federico Lombardiin an interview with Eva Fernández, COPE correspondent in Rome and the Vatican.

Lombardi points out that Ratzinger “hHe has had a very vast, very large, very deep culture, a capacity for critical dialogue with the interlocutors, with the personalities of culture, philosophy, and science in today’s world. I think that his great contribution is truly this: to show reason in the Christian faith.. Faith is not foreign to reason, but goes together. In faith, reason moves to dialogue with others in search of the truth. I think that this dialogue between faith, reason and culture of the world is truly the great charism of Benedict as a theologian and as Pope”.

“I name Benedict as a person very humblefor me in the dialogue with him, I was very pressed for his attention, for his deep listening, because It is not normal for a very important person to be so attentive to a very minor person. with him I I felt on the same level by speaking and listening, he listened with great attention, it is a true and profound humility very impressive to me. It is a person who in this listening, he wanted to deeply understand what the other wanted to squeeze out. This is a continuous character of his attitude, the intellectual dialogue with others, it is a continuous effort to understand the reasons of others well, it corresponded to a level of respect and real depth”.

Regarding Ratzinger’s characteristics, he states that “it was a humble person, a coherent person, who searches for the truth in depth, with a dynamism, does not think of possessing all the truth in a moment, more than it is a path. On this path, the person of Jesus Christ is fundamental, because it is not only an intellectual path, it is also a spiritual path of reason and love at the same time, and the person of Jesus Christ was truly central in his life.”.

On Benedict’s resignation, Lombardi explains that it was “uA very important and very exciting step. More the passage of a path in which we do not have to have any fear because the existence of the Spirit is and Benedict had certainly made a very deep decision, very well thought out, in a very positive spirit of service, not of fear, nor of running away , more of service, but for the good of the Church. In this sense, it was not a difficult day for me, it was difficult because it was a responsibility to help understand this attitude, this event with a positive perspective. This was the same attitude in all the time that followed with the preparation of the conclave and the election of the successor”.

“The Cross of His Pontificate”

During Benedict’s pontificate there were also difficult times, such as the crisis over clergy sexual abuse. The former director of the Vatican press office explains that “The worst was the Cross of Benedict’s pontificate. I had great admiration for Benedict’s humility, his desire for truth and his ability to listen.. He was the first one who heard victims personally, on his trips abroad, when there were these problems in the country he was visiting, and the desire for Justice and to establish the norms, the right to guarantee justice for the victims and for the abusers naturally . Not so much to correct, more to prevent with a good selection of candidates for the priesthood and a work of formation and prevention in the church. In this sense, I think that Benedict has not done everything, Francisco had to continue and we always have to continue in this direction to better solve the problems”.

“For me it was unique”

Lastly, he stresses that “he lived a synthesis of faith, depth, theological vision and reason, and a unique spirituality. This synthesis that is expressed in particular in all his writings, there is no particular in his homilies, in the liturgy because he was fundamental in the liturgical celebration, in the context of the liturgical celebration, the testimony of faith, cultural depth and of spirituality. For me it was unique and I think it is the deepest experience of what I have”.

Federico Lombardi: “The great contribution of Benedict XVI has been to show reason in the Christian faith”