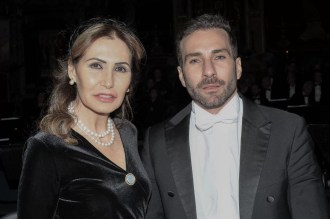 A triptych of events for peace, Friday 4 November at 20.00 at the Basilica of San Bernardino da Siena in L’Aquila, on 5 November at 21.15 at the Upper Basilica of San Francesco in Assisi and on 6 November at 18.30 at the Basilica of Santa Maria in Aracoeli in Rome entitled “Tu es Petrus – Rossini Sacro” in the footsteps of St. Francis made byAbruzzese Symphony Orchestra directed by Jacopo Sipari of Pescasseroli With the’International Opera Choir prepared by Maestro Giovanni Mirabile and with an international cast formed by Donata d’Annunzio Lombardi (soprano), Irene Molinari (mezzo-soprano), Dario di Vietri (tenor) and Gaetano Triscari (bass).

The program provided for the execution of the Petite Messe Solennelle by Gioachino Rossini for soloists, choir, organ and orchestra.

The event presented by Luca Ciccimarra was sponsored by the Pontifical Council for Culture and the International Organization for Migration together with the embassies of the United States, Germany, Greece, Argentina, Bulgaria, Georgia, Italy, Mexico, Monaco, Serbia and Israel. and in Rome Capital, Abruzzo Region, Municipality of L’Aquila, Municipality of Tagliacozzo and was built thanks to the support of the San Colombano Society Costruzioni in the person of its managing director Dr. Edoardo Vernazza and of the Culture and Art Foundation in the person of the President Prof. Avv. Emmanuele Emanuele who works for the promotion, implementation and dissemination of cultural and artistic initiatives, based on the fundamental assumption that art and culture – in their many forms and manifestations – carry out a leading role in the integral growth of the person, in the affirmation of the values ​​of sharing and solidarity, and in the formation of collective consciousness, eliminating differences and smoothing out conflicts, in favor of the social inclusion of individuals and constructive dialogue between different people peoples.

“Events full of great spirituality that deeply moved us. It was wonderful to play in Assisi surrounded by so much beauty. I really want to thank Maestro Ettore Pellegrino and the whole Abruzzo symphony orchestra for their profound sensitivity and great preparation. Same thanks to the President Matteo Bonotto and the International Opera Choir and the extraordinary soloists ”.

Says the Artistic Director of the Abruzzese Symphonic Institution, the violinist Ettore Pellegrino: “I thank the Director Jacopo Sipari Di Pescasseroli, who directed our Orchestra, for inviting us once again this year to participate in the autumn appointment with sacred music in suggestive places of great spiritual appeal. In this edition, dedicated to the figure of St. Francis, we hope that our music will be able to become an instrument of harmony in a moment of great international concern “.

Three concerts with great participation of guests including: the former minister Valeria Fedeli, sen. Michele Fina, Princess Maria Pia Ruspoli, and the ambassadors Alberto Barranco Chavaria of Mexico, Sima Abramovich of Serbia, Andrii Yurash of Ukraine, Philippe Orengo of the Principality of Monaco, Bogdan Patashev of Bulgaria, Helio Ramos of Brazil and the Italian ambassadors Augusto Massari and Amedeo Trambajolo and the Mayor of Tagliacozzo Giovagnorio.

EXTRAORDINARY SUCCESS FOR ROSSINI SACRO PER LA PEACE IN ROME, L’AQUILA AND ASSISI WITH ISA AND JACOPO SIPARI DI PESCASSEROLI