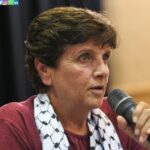 The Thursday evening, bizilur organized a discussion in which women from the UAWC, Union of Palestinian Agricultural Work Committees, participated; and the UNAC, National Union of Peasants of Mozambique. The event began with a mystique; a usual prayer to give way to all peasant life meetings, which symbolizes spirituality and the connection between the people present in the place and the issues to be dealt with with nature, the land, the seeds and the putting of the world in the center .

Waheeba Shamnali and Mariam Mousa were in charge of representing the UAWC; and Flaida Jose Macheze came on behalf of UNAC. Both organizations share the same objectives: the defense of freedom and justice in their lands; protect local seeds and fight for the rights of all peasant families.

The UAWC was founded in 1986 to fight for the rights of peasant women and for food sovereignty. They organize themselves into women’s associations and try to sensitize young women so that they inherit the resistance of their ancestors. In their struggle, they resist oppression along two lines: activism in resistance to the Israeli occupation; and internal activism and empowerment of women in their communities, in order to improve women’s rights in all areas, public education and health, inheritance, etc. A job that they currently carry out clandestinely because of the Israeli occupation.

Shamnali She is the president of several charitable associations in Palestine and a member of others related to land and agriculture. Mousa is also actively involved in Via Campesina; she is the coordinator of her area and an activist for Palestinian women’s rights. Both represent the Palestinian woman because they consider her to be a strong and responsible woman, both outside and inside the home; and that, on many occasions, she acts as mother and father at the same time.

These women relate participation in agricultural organizations with the feeling of union with the land. They are lawyers and defenders of the Palestinian camps. Defenders of a land that also represents its economy; whose crops are expropriated, on numerous occasions, by outsiders, such as the Israeli army. A violent situation that, in addition to their economy, affects their education, health, daily life, and even their family responsibilities. “Agricultural work has empowered women a lot, because thanks to it they have started their own businesses and businesses. Although, to maintain them, the Palestinian woman has to resist the challenges and challenges that exist in her land from the Israeli government”, Shamnali explained. For Mousa, caring for and planting the land is more than a job, it is a political act, since caring implies protecting the territory: “It is what motivates us to defend freedom and justice in this land.”

Currently, there are 168 women detainees and 20 girls imprisoned for “resist the dictatorship to which they are subjected.” mouse feels the obligation to support and help all those women who suffer because they have been separated from their children, because their relatives have been murdered in front of them, because they have relatives in prison, detained and on hunger strikes to the point of reaching death. death.

Mousa considers that this struggle is the greatest resistance against a colonialist power apparatus; and, at the same time, one of the least visible struggles: that of Palestinian women. “While I am here giving this talk, the Palestinian blood of women, children and the entire civilian population continues to be spilled. We continue to resist and we will continue to resist.” he assured with a mixture of rage and pride.

UNAC, founded in 1987 and registered in 1994, was born to oppose the neoliberal policies that were being introduced in Mozambique. At a time when food imports were fundamental in the country, those who already worked the land organized themselves and created a platform to guarantee food and rights to peasants. Currently, more than 50% of its members are women. They associate and collaborate with other organizations. Allies are strengthened so that the struggles advance. Offering clear information to the population is one of its main objectives; because although there are laws, most women do not know how to abide by them due to ignorance. Hence the existence of study circles; feminist bonfires in which to transfer knowledge from one to another in order to be able to denounce any violence.

Flaida Jose Macheze, along with many other people, fights so that everyone can have a piece of land in which to produce and protect their local seeds. Although the objective is not only to produce, but to fight against agribusiness, and for the freedom to harvest and consume what everyone wants. “Food not only feeds, it also takes care of the body; it can be medicinal. Farm families deserve a healthy life.” explained.

They also claim the right for each producer to be able to choose their prices in the market; an objective that precedes the demand for the improvement of infrastructures. According to Macheze, life in rural areas implies a lack of energy, roads and the difficulty of transporting their crops to the nearest cities.

The defense of women’s rights is also considered a crucial issue in Africa. In fact, it is common for many families to be made up of 20 or 30 people living in the same house, at the expense of aid that is scarce. This is because it is the husbands who decide the reproductive lives of their wives. The high birth rate increases migration to the cities in search of better alternatives, but without any guarantee. Women come to opt for prostitution as a livelihood. The war in the north of the country does not facilitate this situation. “Every day men are beheaded and their women witness it. They return them to the villages to tell and generate trauma and violence. They do it to prevent peasants from migrating to the cities”Macheze lamented. From UNAC, they try to find alternatives that offer rural women a better way, such as the provision of land to harvest. Unfortunately, as she explained, the repression is so great that a single claim on social networks means waking up with armored cars in front of their homes. In the same way, the right to demonstrate is also violated. “Our policies are old, nice and pretty, they bring everything that women would like to see, the problem is that they remain on paper”, explained.

The situation of peasant women in Palestine and Mozambique is full of violations. “Let’s globalize the fight, globalise the hope”, recited Macheze. A motto that symbolizes the importance of unity and support as a means to achieve rights that, in addition to being essential, belong to them.

“Caring for and planting the land is more than a job, it is a political act”