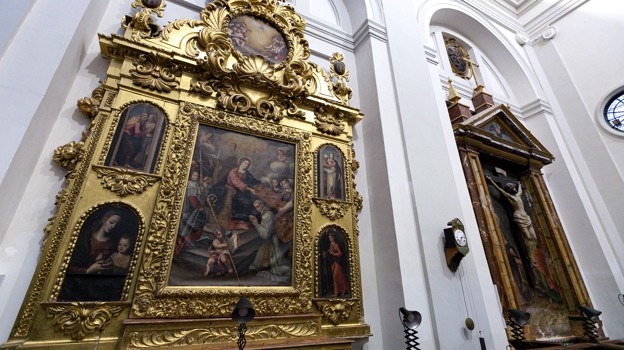 At the gates of the convent of Santo Domingo el Antiguo, Sister María awaits with her eternal smile. This nun from India is now one of those responsible for this community and one of the few that inhabits this historic building that she presumes, among other things, to house in her crypt the remains of Doménikos Theotokópoulos, the Cretan painter better known as El Grecowhose works stand out in the altarpiece of the church of this religious site.

But that is not the only convent in Toledo that keeps architectural and artistic jewels within its walls. From the best Mudejar complex in Santa Isabel to the mother house of the order of the Concepcionistas, where Saint Beatrice de Silva founded the order, including the best collection of baby Jesus in Santa Claraof crucifixes in the Gaitanas, relics or the largest cloister in San Clemente, whose church is of Alonso de Covarrubias… All this and more is what the cloistered monasteries of Toledo treasure, monuments that in another time had a great weight in the city, but that for some time now are in a critical situation and, if no one remedies it, many of them are doomed to close soon.

Despite this, Toledo is one of the cities in the world with the most cloistered convents in the world. The Rome of the Tagus, as it is known by many due to its religious symbolism, keeps within its walls not only a considerable number of monasteries, but also a complete representation of religious orders, as well as a compendium of various sensibilities and spiritual charismas. that enrich the life of the Church.

To publicize this matter and to try to help the conservation of the convents, the Toledo historian Laura García García-Tapetado He has just published his book ‘Clausuras de Toledo’, a guide that, with historical rigor and artistic curiosity, tours the female monasteries in the old part of the city. In it, this graduate in Humanities from the University of Castilla-La Mancha and student of Archeology at the Autonomous University of Madrid shows the life of the religious consecrated to prayer and the secular history of the monasteries they inhabit, while helping to discover the unknown works of art that are kept within its walls.

Since 2020, Laura García, as an official tour guide for her own company (www.secrettours.es), has been making solidarity visits to cloistered convents to raise money to lend a hand to religious communities, further harmed by the pandemic. “Many of the people who went on these routes through these monuments – he explains – were left wanting more information or to be able to read everything I told them.” That was the germ of the book.

However, as he acknowledges to ABC, “one of the problems in relation to the existing information on the convents of Toledo is that it is very dispersed or not up to date”, taking into account that the The reference book for studying this issue is that of Balbina Martínez Caviró, published in 1990, more than three decades ago. In addition, he points out, “there was a lack of content from the works of art that are preserved in them.”

For this reason, ‘Clausuras de Toledo’ tries to condense everything a person should know when visiting these monuments, with a section for their history, art, the main works and singularities of each of them, as well as a few small brushstrokes of the religious orders that inhabit them. The book has an extension of 200 pages, with an equitable distribution of space for the eleven buildings that appear in it, attaching photographs and a map so that the reader can locate them and get an idea of ​​the enormous surface they occupy within the Historic center of the city.

Right now, the author reports, there are ten female cloistered convents active in Casco de Toledo. “The situation, in any case, is very worrying because the communities that live in them range from 5 to 20 nuns, when the Pope of Rome stipulates that for a community to be viable it must have young nuns and be made up of more than five members», he emphasizes.

«All this makes us think of a close and imminent closure of some of these convents, since Toledo has the same problem as in the rest of Spain, which is that the nuns are getting older and do not have generational or vocational relief. , except for small exceptions of novices who have entered one of them, “he adds. In fact, Since 2016, Santa Úrsula, Las Benitas, Las Capuchinas and Santa Clara have closed their doorswhich, although not active, is still open to the public as a museum.

«Between aging and the lack of vocations, 25 years from now, if you hurry me, as long as we continue in this line, there will be no cloistered convents in Toledo», Laura García abounds. While solutions are being sought, one way to do your bit to help preserve these convents is by buying this book that aims to serve as a guide to learn about eleven of these most important historical buildings in Toledo, along with their art and spirituality. The prologue is written by the Archbishop of Toledo, Francisco Cerro Chaves, who, according to the author, will present it to ABC at the end of January.

The book has a cost of 20 euros and a part of the benefits will go to the conservation of the convent heritage and religious communities. You can buy it in the craft shop on Santo Tomé street, number 13, and from now on also in the convents that have a shop, such as Santo Domingo el Antiguo, Santa Isabel, San Clemente and Comendadoras de Santiago. Likewise, from January it will also be in shops and online sales.

‘Closures of Toledo’, a unique guide to Toledo convents to help preserve them