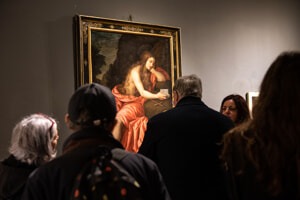 
Anghiari, a medieval Tuscan village famous for the pitched battle in the fifteenth century between Florentines and Milanese painted by Leonardo, now becomes the city of the Woman. It does so with a rich exhibition, which until March 8, will populate four prestigious spaces in its historic center with dozens of works depicting the female image from the Renaissance to today, including myth, biblical and evangelical representations and much more.

In Stories of Women, this is the title of the exhibition, paintings, drawings and sculptures, scattered between the Battaglia and Anghiari Museum, the Palazzo Taglieschi Museum, the Church of Sant’Agostino and Palazzo Pretorio, in fact synthesize five centuries of Western culture through representations iconographic works of Eva, Maria, Maria Maddalena, Santa Caterina, and again Leda, Medea, Penelope (just to name a few), made by great masters such as Michelangelo, Dürer, Jacopo della Quercia, Giovanni dal Ponte, Goya, Manet; up to the contemporary recovery of more archaic figurative forms of femininity carried out by the Romagna sculptor Ilario Fioravanti. The result is an exhaustive story in images straddling historiography, legend, allegories, symbolism, spirituality. 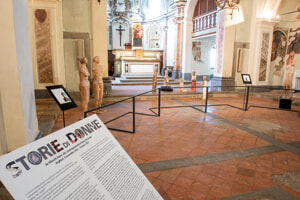 Created by the Municipality together with the Museo della Battaglia and Anghiari with the curatorship of art historians Benedetta Spadaccini (adjunct doctor and assistant curator of Drawings and Prints at the Veneranda Biblioteca Ambrosiana) and Gabriele Mazzi (director of the Museo della Battaglia and Anghiari), The exhibition was born – not by chance – from the idea of ​​two women: Alberica Barbolani da Montauto and Ilaria Lorenzini, respectively councilor for culture and tourism of the Tuscan city.

“As always happens – explains Alberica Barbolani da Montauto, Councilor for Culture of the Municipality of Anghiari – the events arise from long periods of preparation, reflection and study. In this case there are many factors that combine to make up this exhibition, the first of which is the trust in dialogue and in the search for common objectives, which, when they are noble, are found punctually ”.

The stages of the exhibition

The Museo della Battaglia e di Anghiari presents 18 works, including precious graphic works, such as the creation of Eve by Michael Wohlgemuth (Nuremberg 1434-1519) and the precious sheet with Adam and Eve by Albrecht Dürer (Nuremberg 1471 – 1528) . The famous Hasta la muerte by Francisco de Goya (Fuendetodos, 1746-Bourdeaux, 1828), the Olympia by Èduard Manet (Paris, 1832-1883), the Penelope by Max Klinger (Leipzig, 1857-Grossjena, 1920) are part of the itinerary. ), and also the rare sheet containing Leda and the swan in a landscape, a sixteenth-century drawing that reproduces the lost work of the same name by Michelangelo Buonarroti. There is also a small panel representing the Mystical Marriage of Saint Catherine, considered a copy of the famous subject by Correggio; the penitent Magdalene, long ascribed to the manner of Cristofano Allori, who today, finally, finds her real attribution to Francesco Morosini on the basis of a brilliant study. This painting, the subject of a recent restoration supported by Salpa through the Lions Foundation and the Lions section of Valtiberina, represents a real discovery after the cleaning of the paints that obscured the sign and that partially concealed the author’s signature.

In the Museum of Palazzo Taglieschi, attention is focused on three particularly significant representations of the Virgin: the hieratic Madonna by Giovanni dal Ponte, just returned to Anghiari (thanks to an agreement between the Regional Directorate of Museums for Tuscany and the Diocese of Arezzo-Cortona -Sansepolcro, after having remained for several years at the Medieval and Modern Museum of Arezzo), the iconic Madonna with Child by Jacopo della Quercia and the moving, very sweet Virgin attributed to Benedetto Buglioni who caresses the Child with his hands and eyes. We therefore go from the dawn of the Renaissance of the first two authors, contemporary but distant in taste and training, to the art of a later and more mature Renaissance canonized in the elegance of the Robbiane style adopted by Buglioni.

Finally, in the church of Sant’Agostino and in Palazzo Pretorio, an itinerary between contemporaneity and research of origins develops with the sculptures of Ilario Fioravanti (Cesena, 1922 – Savignano sul Rubicone, 2012): large terracottas that transmit the archaic expressive and spiritual power of femininity modeled in its most basic and primitive forms.

Stories of Women is produced in collaboration with the Regional Directorate of the Museums of Tuscany, the Ilario Fioravanti Archive, the Parish of Anghiari, the National Association of Memory Houses.