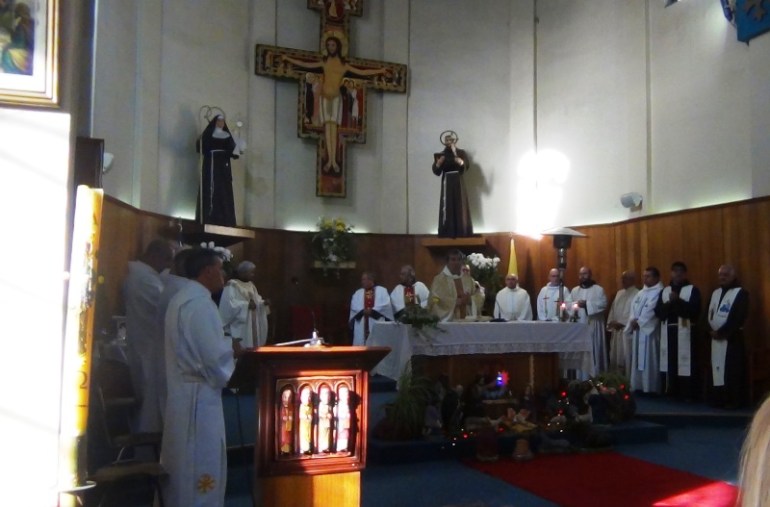 Being already part of the history of the Diocese of San José de Temuco and of the regional capital of La Araucanía, the Franciscan brothers of the parish community of Nuestra Señora de Lourdes, left the city and with great feeling, were accompanied in the celebration of the Holy Mass, on Tuesday, December 27, by priests, deacons and hundreds of parishioners.

Fray Carlos Paz, Provincial Minister of the Franciscan Congregation in Chile, pointed out about this time of hope: “First of all, at the level of feelings, of course there is a feeling of shock, of sorrow because a game is always painful, much more when after so many years we have to say, we leave because we need to strengthen ourselves in a profound process of reunion with the vocation, with the Franciscan identity, revitalize ourselves (…) surely by sowing and surely seeds that have ignited and borne fruit and hope, as the Pope said at the beginning of this month, make the miracle of the multiplication of hope come true”.

For his part, Fr. Juan Andrés Basly, diocesan administrator, referred to Franciscan spirituality, “There are many mixed feelings, one never wants the brothers to leave but nevertheless, the things of God are not the things of men and the Lord has asked us to they also for pastoral needs must leave. I am very grateful for his presence for so many years and sad too, but at the same time with many challenges and full of hope”.

Brother José Manuel, OFM, who for 6 years lived in this Franciscan community in the city of Temuco, said: “I currently live in Castro, but from 2009 to 2014, I lived here in Temuco. That is why from Castro I wanted to make myself present at this moment, that it is certainly not easy to leave a presence of so many years, faces, experiences, experiences of the Faith, it is not easy to leave it, but this must also be seen in the light of hope , in which everything is renewed, in which the Christian community also has a rich spirituality, which is Franciscan, but they also have to continue walking with the new pastor they are going to have. So I wish the community of the San Francisco Nuestra Señora de Lourdes parish that they continue to accompany, encourage their pastor and from that reality also live the charism that welcomed them for so long.

Mrs. Zulema Cordero, a parishioner of the Franciscan community, also expressed her feelings: “There have been many years spent here and lived with the Franciscan brothers and it is today that we want to thank you on behalf of the Secular Franciscan Order, on behalf of all of you, who have taught us to love God in a special way, in the manner of Saint Francis of Assisi. We think that it is a great task to continue, a great task to maintain spirituality. I believe that living Franciscan spirituality is living the gospel of life (…) Thank you, thank you, thank you in the name of each one of you and in the name of the entire Secular Franciscan Order of the Parish. May the Lord bless you, may the Lord give you strength in your vocation”.

There are so many testimonies and feelings that reflect the pain at this departure, such as the words of Mrs. Georgina Soto Cerda: “All my life I have been with the Franciscan brothers, more than 80 years, this is my home, my community, there are so many I would like to tell you many, many things, they gave us everything, everything, to be brothers and to be sociable and humble, that they always instilled that in us and it will never be forgotten”.

Alejandra Rivera, catechist, expressed: “I have been a Catechist since 2007, I entered the parish scouts at the age of 13, it is very sad because it is a life, it is everything, sharing with so many people, with each priest who came, it is live the faith in community, in fraternity, although it is true, each one in his group, but when we had to meet, we were all present, we put differences aside, there we were a body, we were a fraternity of brothers”.

There are thousands of stories and beautiful testimonies of so many brothers who lived this spirituality, based on the writings of Saint Francis, Peace and Good.

After 140 years, the brothers of the Franciscan Congregation leave the city of Temuco – Diocese of Temuco

The Dominican inspiration in the life of Aldo Moro
East and West. But the spirit of the West is also rationality and democracy
«The Mozarabs maintained their faith during the Muslim domination thanks to their Visigothic roots»
Tweet
Share
Share
Pin