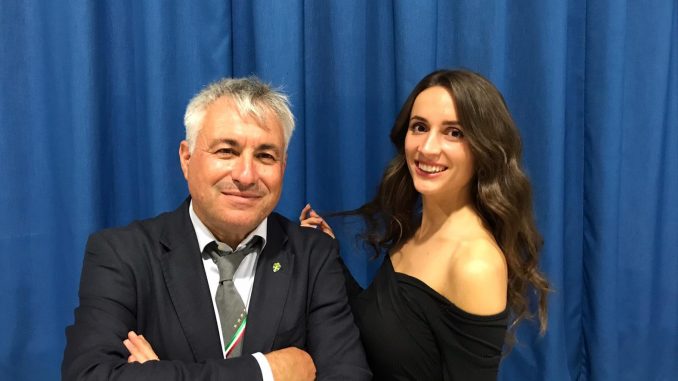 After the great success of La Spétnèda, last year’s film, freely inspired by the story of Leonardo Da Vinci’s “Scapigliata”, the famous painting on wood kept in the National Gallery of Parma will be screened on Friday 2 December at 20.30 at The Space Cinema Parma Centre, “Colpo di Genio” the latest work by Romeo Azzali.

Admission is by donation and all proceeds will be donated to the Children’s Hospital of Parma.

Azzali, director and screenwriter for pleasure, is deputy mayor of Sorbolo-Mezzani, was mayor of Mezzani and football coach (in 2000 he brought Brescello within a whisker of promotion to Serie B, playing in the play-off final) in his professional life he is a poplar grower (and holds the position of president of poplar growers of Emilia-Romagna).

“Colpo di Genio” is the twenty-ninth film for Azzali who has a long career as an amateur director, which began in 1987 with the founding of Mezzani Film Production. His are stories that take place right in Mezzani, interpreted by his fellow citizens, none of whom are professional actors. There is no shortage of freely adapted remakes of great films: from 007 to Diabolik, from Full Monty to Reservoir Dogs, Zorro and Star Trek, always rigorously interpreted by non-professional actors.

With La Spétnèda they began to get to know her, as a director and screenwriter even outside the borders of Mezzanine…

To tell the truth, it happened with “Mezzani gol”, a 2017 film, which also spoke of Parma Calcio and which one of the interpreters, Vincenzo Pincolini, historical athletic trainer of Parma, Milan, the national team and many other clubs, advised me to project it also in the city.

The Spétnèda as well as in the cinema, has long been in the schedules of TV Parma and also of TV San Marino, which is seen nationwide. In fact, feedback has also arrived from Romagna, the Marches and Tuscany. Besides the fact that we have raised funds for the Children’s Hospital, which was our main objective, we have contributed to making part of the city’s artistic heritage known. Many citizens of Parma did not know that the National Gallery held a work by Leonardo.

How did your passion for cinema come about?

At school. I attended the Salesian high school and Fr Emilio Bruni, a professor of religion, it was the 1978-79 school year, promised us to give us two hours of religion if we completed a project at the end of the year. And we worked for a whole year on the making of a film “Story from a cloistered boarding school”. Working with the super eight wasn’t exactly like today when you can make a film with a good smartphone. We had to send the films to Milan where they were developed, then they returned and we had to dub them, edit them, in short, it took us all year, it was a very hard job. And then the day before the “première” the director wanted to see the film and since in his opinion it was not “politically correct” he forbade us to show it.

And how did it end?

Thanks to the mediation of the religion teacher we were able to project it. But today, decades later, I have to say that the director, who was Don Francesco Viganò, was right. Today I would never do it again…

Have you ever thought of dedicating yourself totally to this passion?

I don’t want to become a professional, for me it’s just a way to aggregate, keep the people of the village together and also to open up my community to others.

In 1986 I bought my first VHS camera and have been filming places and people ever since. In the end we created a sort of historical document: we recorded the many changes that have taken place. Also in 2020 we managed to make a film and there we included many people who passed away during the pandemic, including the historic parish priest of Mezzano Inferiore Don Fermo. It was our way of celebrating them.

What can you tell us about the plot?

That there is a genius in each of us, you just need to know how to listen to it… Seriously, the film takes place in the 1970s, obviously in Mezzani. Maddalena Ferroni rebel daughter of Casara (Anna Piazza) finds the shot of life … she meets the Genius (Luigi Azzali). Through fantastic adventures, the two seek the key to free the Genie from the slavery of the lamp. But I don’t want to reveal more.

In the end credits you can read many Azzali…

Yes, I confess that it is a bad case of nepotism… My brother Otello wrote the original music, my cousin Luigi plays the genius, my older brother Vittorio has another role and then there is my nephew Tommaso, also among the actors.

Are there well-known faces from Parma in Colpo di Genio too?

Yes, journalists Sandro Piovani, Gabriele Majo, Carlo Chiesa also play a role in this film, then Vincenzo Pincolini did not want to be missing and, as always, Meuccio Berselli also has a small part. For the first time on the big screen there will also be the former city councilor Tiziana Benassi. I would like to take this opportunity to thank the owners of the Labirinto della Masone which was the scene of some filming.

All that remains is to wait for Friday 2 December to see Colpo di Genio and donate as much as you can.

Arriving on December 2 “Colpo di genio”, the film made to raise funds for the Children’s Hospital. INTERVIEW with director Romeo Azzali –