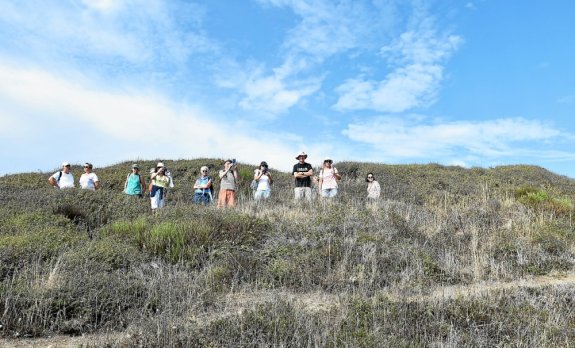 
Imagine walking between the Grand Mont and Port-aux-Moines, in Saint-Gildas-de-Rhuys, admiring the exceptional setting and, in the distance, hearing the soft sound of a harp, often accompanied by a voice. We are intrigued, we are looking for where these notes come from which wander with the wind. Below the coastal path, Pierre Bertrand sits on his little stool, facing the ocean, and lets his fingers glide over the thirty-four strings of his Celtic harp. The moment is simply magical. Difficult to pass one’s way without listening to this 26-year-old singer-songwriter and performer. “I always come to play here, I live five minutes from here and it’s been my corner since I was little,” says the Gildasien who says he is so attached to this spiritual cradle of childhood.

I have been reading and writing poems since I was a kid. Rimbaud touched me the most, no doubt because I am romantic and melancholic.

Pierre Bertrand is self-taught and finds inspiration in front of this life-size painting. “The sea is my main refuge, my place of expression and creation. I need to go dig there, even on a windy day. The colors are never the same, it’s very inspiring. I have been reading and writing poems since I was a kid. Rimbaud touched me the most, no doubt because I am romantic and melancholic. I read a lot of Irish and Breton tales because there is a very beautiful moral behind it and it makes people travel in songs. I love stories of sailors, the world of mermaids, I like to tell legends of Celtic heritage through music,” explains the artist, in his soft voice.

In the family, we are music lovers. With a great-grandfather who played the piano and a grandfather who played the clarinet, the young Pierre first tried his hand at the piano, around the age of 9. “I played the harp in high school when I was at Notre-Dame Le Ménimur, but it was when I went to see the Japanese film “Arrietty and the world of pilferers” that I fell in love with music. The music for this film is by Cécile Corbel. Neither one nor two, the young man takes advantage of the concert of the harpist from Finistère in Auray (56) to go see her. “After the concert, I went to meet her and she saw that I was passionate about music. » Since this meeting, nine years ago, Pierre Bertrand and his harp have been one. “She’s my faithful companion and vice versa,” jokes the Gildasian.

The regulars of the market of his commune had the leisure to listen to him for some time. “I did a few private concerts, in theaters, in Saint-Gildas, weddings and even funerals, it surprised me that I was asked for this circumstance. When I was a child, I went to church and the spiritual notes came into my way of playing. People told me that I had a great sensitivity, ”appreciates the one who was an altar boy.

The rose has an eternal and timeless side, a fragrance, like music.

Sensitive is indeed the word that sticks well to the young man who hopes to release a first album soon. Pierre Bertrand plans to be accompanied by two harps and two voices. “It’s a dream, like a culmination”, assures the interested party who has another passion: botany. Wherever it is in nature, it gives you all the names of flowers in Latin. “Flowers are very sensitive to music. For me, these are two passions that mingle. Her favorite flower? “The rose, flower of romance. It has an eternal and timeless side, a perfume, like music. »

Her dream would be to one day live from music and flowers. “I would like to do concerts at the end of the world, meet different audiences. I also have my diploma in floristry. Between these two dreams, there is a much more surprising one on the part of the Gildasien: to be a candidate for Koh Lanta. “It’s a little strange, you’re going to tell me! It is not for the sporty side but for the adventurous and solitary side. To come face to face with yourself, a question of combativeness, I like that. And then, I would see the landscape. »