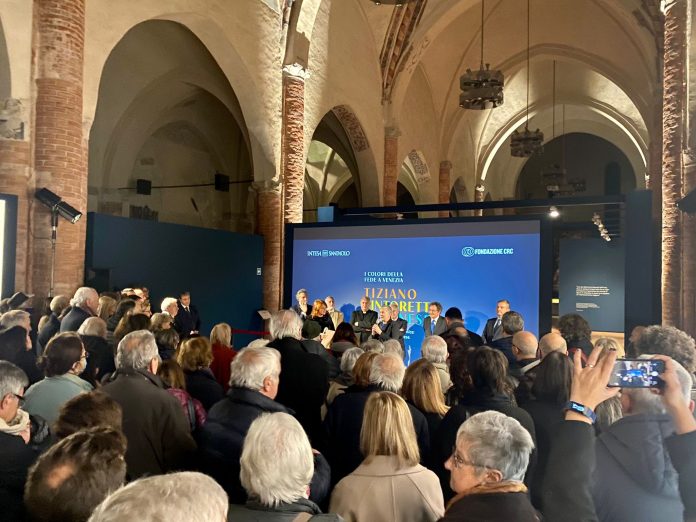 After the suggestive prelude reserved for the press and institutionsthe exhibition “The colors of faith: Titian, Tintoretto, Veronese” was officially inaugurated in Cuneo, which brings the art of the three great Venetian painters to the city with five altarpieces, for the first time collected in one place at the same time , coming from as many Venetian churches.

The exhibition, curated by don Gianmatteo Caputo (director of ecclesiastical cultural heritage and religious buildings of the Patriarchate of Venice) and Giovanni Carlo Federico Villa (director of Palazzo Madama Civic Museum of Ancient Art in Turin) with the organizational support of MondoMostre, concludes the cycle of initiatives carried out in 2022 to celebrate the 30th anniversary of the CRC Foundation, which has always been active in supporting and promoting valuable cultural activities aimed at increasing the role and recognition of the Cuneo area as a center of cultural production.

Present at the opening to the public, the mayor of Cuneo Patrizia Manassero, the President of the CRC Foundation Ezio Raviola, the President of Intesa Sanpaolo Gian Maria Gros-Pietro, and the curators of the exhibition.

THE EXHIBITION – Carried out together with Intesa Sanpaolo as part of Progetto Cultura, a multi-year plan of initiatives with which the Bank expresses its commitment to the promotion of art and culture in our country, the project offers the public for the first time next to each other to the other five large altarpieces by Tiziano Vecellio, Jacopo Robusti known as Tintoretto and Paolo Caliari known as Veronese, coming from as many Venetian churches.

The exhibition aims to give back, thanks to the setting offered by San Francesco, a precise perception of how Venetian color has placed itself at the service of sacred narration. The works presented, dating back to the period between 1560 and 1565, are in perfect chronological and stylistic dialogue and deal with fundamental themes in Christian iconography: the Annunciation and the Incarnation, the Baptism of Christ, the Last Supper , the Crucifixion and the Resurrection.

The imagined exhibition itinerary allows us to grasp the specificity of an art, the Venetian one, which, even when it involves foreign artists, manifests itself through works that arise under the influence of the clients and the context of the Serenissima. In these works transpires the genius of three great artists who, over a five-year period, show what the instances of Venetian painting in the second half of the sixteenth century are, capable of connecting stylistic and cultural values, technical and philological influences, iconographic references with reasons and motivations spiritual: in fact, the exhibition also offers a reflection on the most intimate religiosity of the three artists and how they influenced each other.

The exhibition is accompanied by the catalog published by MondoMostre edited by Don Gianmatteo Caputo and Giovanni Carlo Federico Villa. During the opening of the exhibition there will be an extensive program of collateral activities and educational workshops.

The innovative lighting project carried out by Consuline uses Zumtobel products. The project applies the “Monza Method”, conceived by Francesco Iannone and Serena Tellini and is based on the relationship between colors and the human perceptive system. Through the variation of light sources with different spectral distribution curves, the perception of pigments is emphasized, improving the overall understanding of an exhibition and making the experience immersive.

Holders of the entrance ticket to the exhibition will be entitled to access at a reduced rate to the Gallerie d’Italia in Milan, Naples, Turin and Vicenza, until 30 June 2023.

Thursday 24 and Friday 25 November: free inaugural guided tours at 6 pm with delivery of the free catalogs (registration on eventbrite)

Saturday 26 and Sunday 27 November: free inaugural guided tours at 3.30 pm with delivery of the free catalogs (registration on eventbrite)

Free guided tours every Saturday and Sunday at 3.30pm.

Cuneo: the exhibition “The colors of faith in Venice: Titian, Tintoretto, Veronese” officially inaugurated (PHOTO) – www.ideawebtv.it – ​​Online newspaper of the province of Cuneo