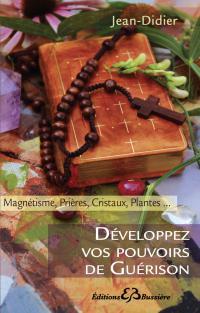 Prayer healing is a personal practice that can be done in religious faith or not. If you need to go to a church, temple, mosque or synagogue to pray, here are the places I recommend.

Call where you are, the Saint you call will always be there to answer at the right time. The forces you put into action will be available immediately. A single rule for the person who must pray or invoke a Saint, he must deeply believe in what he is doing and above all, he must be deeply convinced of the usefulness of his prayer. You can either choose a prayer from your religion or a prayer you have made yourself. If you are convinced of what you do and what you say when praying, you will get great results. Only one thing perhaps to add and advise, never pray selfishly for yourself alone. Think and pray for your friends, your family, for peace in the world. In this way, you will make everyone benefit from the effects of your prayer.

>> To read on FemininBio How to get in touch with your Guardian Angel?

In addition to prayer, you can go directly to a spiritual high place to ask for improvement in your job, finances, health, or feelings. Even if there is no particular blockage at home, you can still go to a spiritual place just to find a little more energy and serenity.

I must say that I very often had the opportunity to go myself to a high place of prayer, a cathedral, a mosque or a synagogue and, each time, the same magic happened. A kind of inner transformation that makes us feel very small, humble and at peace with the world. Serenity invades you, to feel completely invested by the place in which you are. From this moment, the prayer or the request that you have to formulate, is done by itself as if it had always been natural. No doubt is then present in your mind and you are then able to remain immersed, for a very long time, in deep meditation where you regularly feel a very strong spiritual force penetrating you little by little. It is a very pleasant moment that I absolutely recommend.

Here are now known places of prayer in France, along with their addresses, Saints to be mentioned and a brief summary of the history of each place. You can use them in the most desperate cases, but also to reinforce a healing action.

Our Lady of Salette

Our Lady of the Miraculous Medal

Our Lady of Deliverance

The Great Synagogue of Paris

To find out more and go further in healing: Jean-Didier is the author of ” Develop your healing powers published by Editions Bussière. All its news on the site www.jean-didier.com