It was to be Cardinal Luis Antonio Tagle prefect of the Congregation for the Evangelization of Peoples and President of Caritas Internationalis to preside over the Eucharistic concelebration for the twentieth anniversary of the canonization of Saint Pio of Pietrelcinaat 11.30, in the new church dedicated to the Saint, built in San Giovanni Rotondo on a project by the architect Renzo Piano.

But as the archbishop of Manfredonia explained, Monsignor Franco Moscone, who presided over it in his place, Cardinal Tagle suddenly had to undergo laser surgery on June 15 for an eye problem and the doctors advised him not to travel from Rome. “Let us pray for him, for his health and for the evangelization of peoples,” said Monsignor Moscone who in his homily underlined the relevance and spiritual depth of the figure of Saint Pio. “In confirmation of the greatness of God’s designs today, that little friar who came to this tiny and unknown place over a century ago, is a giant of spirituality and San Giovanni Rotondo a crossroads of faith known to the world“.

Moscone summarizes the exemplary significance of the life of Saint Pius in three key words. «The first is the Word which is called Jesus crucified and risen of which he became a living witness. The second is devotion not to be confused with devotion: Saint Pius was authentic devoted to God by giving himself to him with his whole tortured body and soul and thus calls us to look to the Transcendent. The third word is the Samaritan and we need to focus on the last part of the parable, on the charity to be spread from person to person, that is the Samaritan inn. Padre Pio made three inns: the first for restoring the body, Casa Sollievo della Sofferenza, attentive to the needs of the sick, guaranteeing the best of medical assistance and the love that comes from Christ. The other two inns are both spiritual in nature: the prayer groups scattered around the world and the shrine that guards their mortal remains and attracts pilgrims from everywhere. It must not be a museum or a place of memory but a continuous source that is renewed by the love of Christ preached and lived by Saint Pius ”. 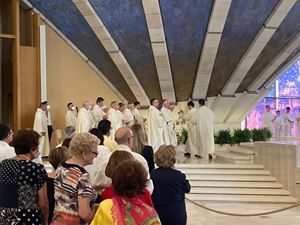 Br. Maurizio Placentino brought the greetings from the Capuchin province of Sant’Angelo and Padre Pio: «It is impossible to summarize all the things that have happened in the last twenty years. But I want to recall three significant examples: «The face of the late Archbishop Monsignor Castoro, the image of Christ the Good Shepherd who gave our Church and us Capuchin friars the grace to live the experience of an affectionate and enlightening fatherhood. Then the visit of the popes, Pope Benedict and Pope Francis who wanted to visit San Giovanni Rotondo and Pietrelcina; that moment is still imprinted in our hearts and it is an event that the Holy Father lived in a spirit of simplicity and joy, which he was able to transmit to all of us. Finally, I remember the pilgrimage of the habit of the stigmata of St. Pius, for many places marked by the cross and suffering, but also by the light of the Risen One, such as Auwschitz, and in particular the martyrdom cell of Father Maximilian Kolbe ”.

Three bishops took part in the concelebration: Domenico Cornacchia (Molfetta), Francesco Chimoio (Maputo) and Domenico D’Ambrosio (emeritus of Lecce). Also present were the mayors of various municipalities of the areas where Padre Pio passed on his earthly journey. Their idea is to sign an agreement to enhance the connection between these important places in the life of the saint.

In the evening, at 9 pm, on the wide esplanade called “open-air church”, an event with the singing performances of Pierdavide Carone, the Jalisse and Graziano Galatone and with the participation of the actor Sebastiano Somma, interpreter of some excerpts from the writings of Padre Pio.

“Father Pio? A giant of the Spirit. And San Giovanni Rotondo, a world crossroads of faith ”