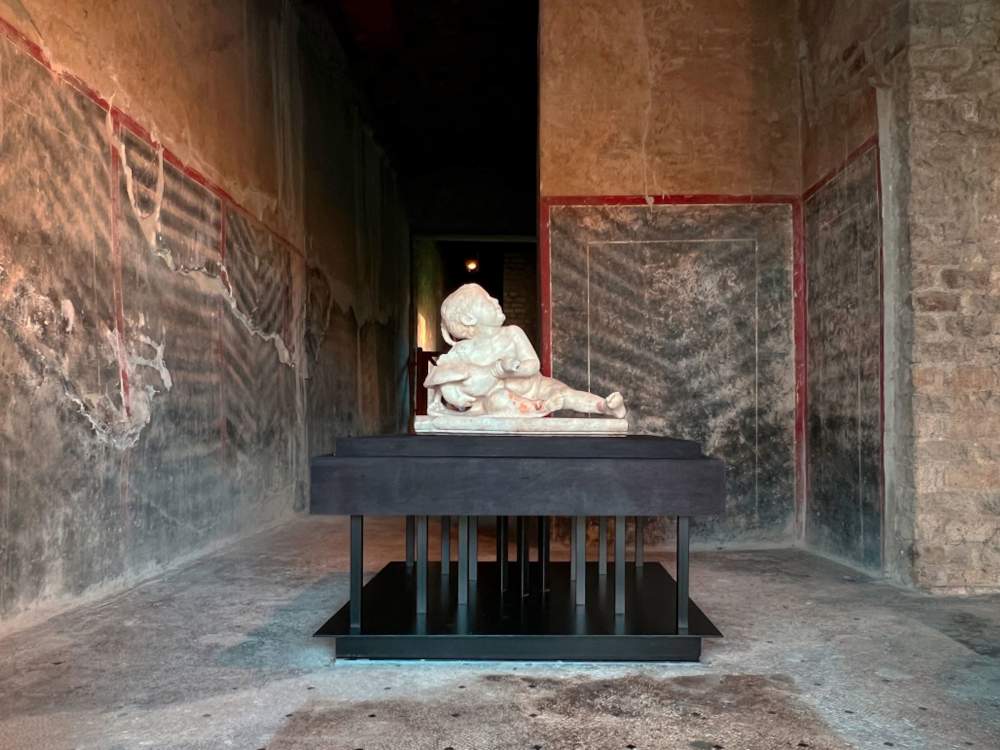 In Seoul, a satirical exhibition on the Korean president was closed. An exhibition that opened last week at the National Assembly Building in Seoul was shut down by officials at Korea’s National Assembly Secretariat because the artwork ridiculed the newly elected president, Yoon Suk-yeol. Originally planned to be open for one week, the “Goodbye in Seoul” exhibition featured 80 works of art, including two satirical depictions of the politician. In one painting the Head of State was shown naked and brandishing a sword suspended over a city, in a manner similar to Goya’s Colossus. [Redazione]

Back to Oplontis. In Oplontis (Naples) 15 artifacts that once adorned the majestic halls of the holiday residence of Nero’s second wife are about to return to the Villa di Poppea. Until now they had remained invisible in the deposits of the Archaeological Park of Pompeii and in a palace in Torre Annunziata. Among the works that are relocated a marble crater in bas-reliefs, the winged Nike, the Artemis, the Ephebe, the Child with the goose, the centaurs and the sculptural group of the Satyr with Hermaphrodite. It is a project desired by the director of the Archaeological Park of Pompeii, Gabriel Zuchtriegel, to enhance the works and the Villa also known for its vast frescoes that decorate most of the rooms. [Tina Lepri]

Céline Kopp and Cindy Sissokho Commissioners for the French Pavilion at the 2024 Venice Biennale. A month after announcing the name of the artist invited to set up the French Pavilion for the 60th Venice Art Biennale, in 2024, the Institut Français today reveals who it will accompany 36-year-old Julien Creuzet as commissioner on this project. It will be a duo of curators: Céline Kopp, director of the Magasin-Centre National d’Art Contemporain in Grenoble, and Cindy Sissokho, curator of the Wellcome Collection in London. [Le Monde]

New Kingdom royal tomb discovered in Luxor. A British-Egyptian archaeological mission has unearthed a royal tomb from the 18th Dynasty (15th century BC) in Luxor on the west bank of the Nile. «This tomb could be that of a royal wife or a princess of the Thutmosid lineage, of which very little has been unearthedArchaeologist Piers Litherland of the University of Cambridge, who leads the British research team for this mission, wrote in a statement. [Le Figaro]

Restorations in the church of the Conversione di San Paolo in Ferrara. One year after the start of the works, the substantial complex of works on the Church of the Conversione di San Paolo is proceeding at a rapid pace, closed for about 15 years, one of the oldest in Ferrara (the first nucleus dates back to the 10th century), “attacked” from the earthquake of 1570 and that of 2012. Among other things, the internal restoration of the fresco depicting the abduction of Elijah (by Scarsellino) in the apse and those of the Carmine chapel, built in the 1660s by Luca Danesi. [Redazione]

Parthenon Marbles: iThe Greek prime minister cools the expectations of the British Museum. The British Museum’s hopes of securing a “long-term partnership” with the Greek government on the return of the Parthenon marbles appear in jeopardy as Greek Prime Minister Kyriakos Mitsotakis on 11 January refuted recent rumors that the sculptures they would soon return to Greece following an agreement with the British Museum. Mitsotakis, on the other hand, has pledged to obtain the repatriation of the marbles if he is re-elected. Mitsotakis’ first term ends in July and this summer he will face general elections to obtain a new government post. «If the Greek people still trust us, I believe we could achieve this goal after the electionshe said during a televised news conference with Greek President Katerina Sakellaropoulou. [Tom Seymour]

Hiroshi Sugimoto in the San Francisco Bay Area. The San Francisco Bay will soon host a monumental site-specific sculpture by the Japanese-American artist Hiroshi Sugimoto (Tokyo, 1948). “Point of Infinity,” a 20-foot-tall stainless steel rod that doubles as a sundial, will rise atop Yerba Buena Hilltop Park on Yerba Buena Island. For the size of the work, which will be visible from many points of the city, in particular from the Bay Bridge, it was necessary to obtain authorization from the Federal Aviation Administration. This $2 million public art commission is part of a $50 million park project on Treasure Island and Yerba Buena Island announced in June 2017. Supervised by the San Francisco Arts Commission on behalf of Treasure Island Development Authority, the initiative attracted more than 500 proposals, which were then reduced to three finalists: Sugimoto, Andy Goldsworthy and Chakaia Booker. [Julie Baumgardner]

The forgery «Apollo with the shield» attributed to Giambattista Tiepolo has been seized. The operation by the Guardia di Finanza of Venice took place after various searches linked to the sales of the painting which had been passing through various auction houses for some time. The investigation, which started from an economic-financial check and the anti-money laundering obligations of the auction houses, made it possible to identify the fake Tiepolo offered for sale by a Piedmontese auction house. «Apollo with the shield» had been circulating on the art market for over three years, passed several times from hand to hand by antique dealers, gallery owners, restorers, private collections, until it appeared on the official market. Among the crucial elements in the hands of the Guardia di Finanza, the presence of multiple authenticity accreditations issued by deceased appraisers and art experts: this is a method often used by forgers and art traffickers to authenticate important paintings or in any case to disguise their illicit origin. Some analyzes have established that the forgery was made after 1950. Two people are being investigated in Treviso: the alleged author of the work and the gallery owner who put it up for sale. [Tina Lepri]

Sgarbi hopes for the return of the athlete from Fano via Twitter. «The Athlete of Fano. We hope to see him returned to Italy soon. Today it is in the Getty Museum». Thus on Twitter the Undersecretary for Culture, Vittorio Sgarbi, drew attention to the story of the statue recovered from a fishing boat in 1964 off the coast of Pedaso, in the province of Fermo, and purchased by the Getty Museum in 1977 for about 4 million dollars. In December 2018, a sentence by the Court of Cassation had rejected the appeal of the US museum, confirming the seizure of the statue, which must therefore be returned to Italy. [Redazione]

The Veil of Class has been re-exhibited in Ravenna. The Velo di Classe, an early medieval textile artefact of great importance, is back on display thanks to a new display at the National Museum of Ravenna: these are three fragments from a liturgical fabric, made and embroidered around 760 AD with the images and names of the first thirty-five Bishops of Verona. Reused to decorate a sacred vestment, it was kept for centuries by the monks of Classe and then came to the National Museum of Ravenna. During the recent restoration it was decided to carry out in-depth diagnostic investigations, to learn more about the composition of this fabric. The first results of the investigations will be presented on January 18, at 5 pm, in the conference room of the National Museum. [Ansa]

Cattelan’s «Finger» smeared. On January 15, some young activists of «Ultima Generazione» smeared «Love», the sculpture by Maurizio Cattelan commonly known as «Il Dito» which depicts a raised middle finger located in front of the Stock Exchange building in Piazza Affari in Milan. Three of them were taken to the police station. [Redazione]

A documentary on Luca Alinari premiered in Florence. Previewed at the Cinema La Compagnia in Florence on January 18, the documentary “The painter of the two worlds” by Lorenzo Borghini returns an intense portrait of the Florentine artist Luca Alinari (1943-2019), a family friend of the director. In the making of the film, Borghini’s wife, the art historian Viktoria Charkina, played a leading role, among the first to study Alinari’s work from a critical point of view. A plurality of sources contributes to the human and artistic portrait that emerges from the documentary, including videos created by Alinari himself, interviews and testimonies of family members, friends, art historians and prominent personalities on the Florentine scene, such as the abbot of San Miniato don Bernardo Gianni who was close to him at the end of the long illness and during the rapprochement, also recognizable in his painting, to faith and spirituality. The strongly experimental evolution of Alinari’s painting emerges, from the Pop Art of domestic environments to the imaginative interior landscapes, up to the more conceptual art of the last period. [Elena Franzoia]

Open exhibitions
Eleanor Antin (with Giorgio de Chirico) at the Richard Saltoun Gallery in Rome. New beginning and first vernissage of 2023 for the Richard Saltoun Gallery, in via Margutta in Rome, which has been closed for over six months. The «Roman Allegories & Greek Mythologies» exhibition, open until February 15, presents works, for the first time in Rome, by 87-year-old Eleanor Antin, one of the most important feminist and conceptual artists to emerge in America in the 1960s. The exhibition compares Antin’s photographic series, which has always been fascinated by the ancient world, with a collection of lithographs by Giorgio de Chirico inspired by Jean Cocteau. In de Chirico’s lithographs, Greek statues, centaurs, sea monsters and the inventor of Metaphysics himself wander in a purely theoretical world. Made with a cast of over 100 friends and models, «Roman Allegories» comprises 12 tableaux up to three meters large in which actors in classical costumes wander among the alleged ruins of the Roman Empire in search of the eternal charm of classicism. Ironic, melancholy, humorous, Antin’s characters wander in a world in decline, while those of Giorgio de Chirico are an eternal and mythological secular mystery of his beloved birthplace of hers. [Tina Lepri]