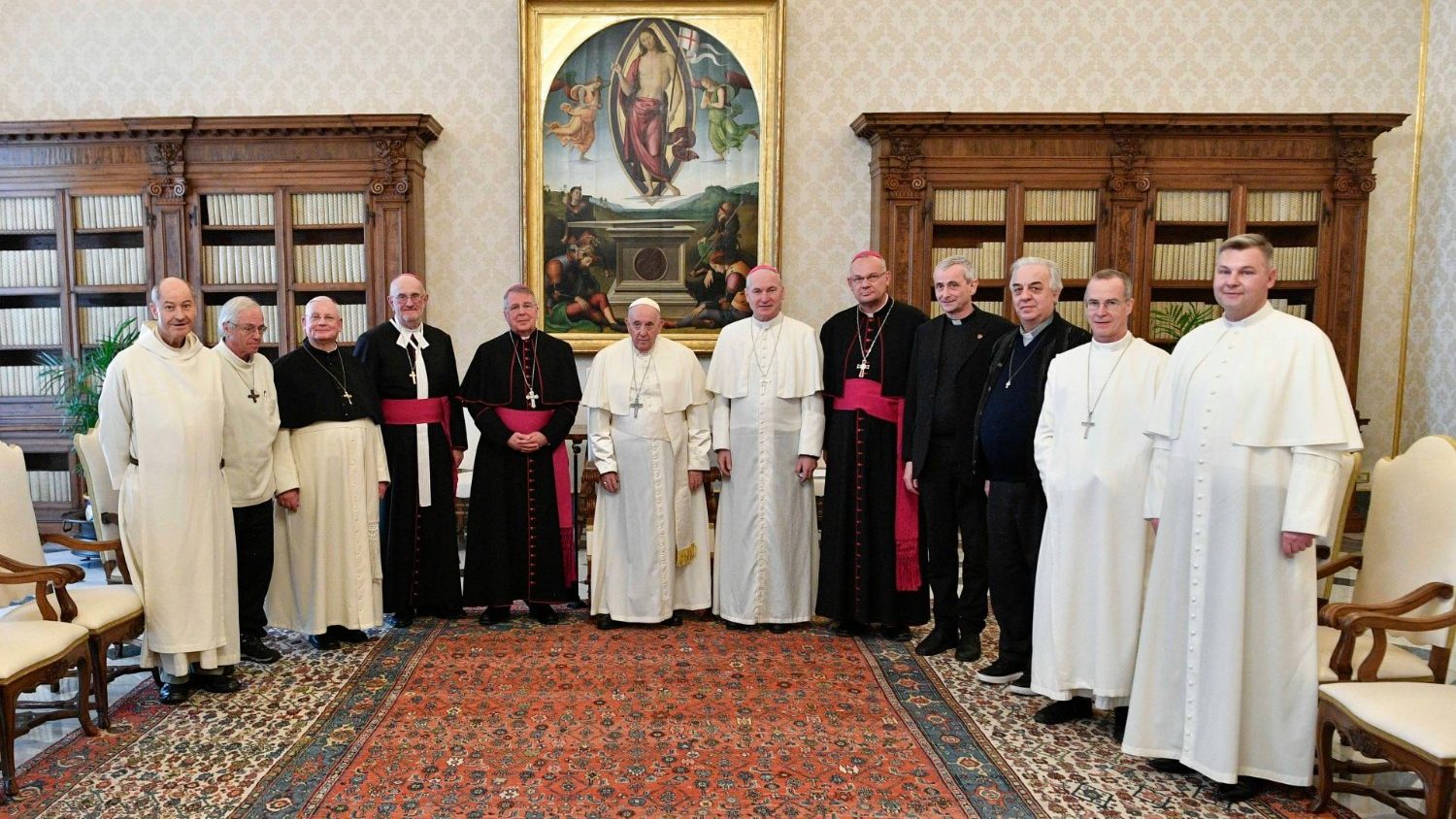 Receiving in audience the Primal Council of the Confederation of Canons Regular of Saint Augustine, Pope Francis recalled that consecrating oneself to God means making the Gospel the rule of life, loving Christ and the Church, which is his body. But also adapting to the circumstances of time, places and cultures. And he affirmed that congregations should not isolate themselves, but rather live in the present, opening up to the future.

The fundamental rule of religious life is the following of Christ proposed by the Gospel. Take the Gospel as a rule of life, until you can say with Saint Paul: “I no longer live, but Christ lives in me.” The Holy Father reiterated this when speaking to the Primal Council of the Confederation of the regular canons of San Agustín whose members he received in the Library of the Apostolic Palace, and asked the religious to make the Gospel their vade mecum and not to reduce it to ideology, so that spirit and life may always remain.

The Gospel continually reminds us that we must place Christ at the center of our life and our mission. This brings us back to “first love”, affirmed the Bishop of Rome.

“And loving Christ means loving the Church, his body. The consecrated life is born in the Church, grows with the Church and bears fruit as the Church. It is in the Church, as Saint Augustine teaches us, where we discover the total Christ.

the search for god

Addressing more directly the regular canons of Saint Augustine, the Pope recalled the human longing for God described by the Bishop of Hippo in the Confessions, explaining that “God has made us for himself and our hearts are restless until they rest in him.” That is why the regular canons are mainly dedicated to the “constant and daily search for the Lord.” Above all in community life, so that the koinoniathat is, communion and fraternal relationship, make “all builders, weavers of fraternity”.

“Seek the Lord in the assiduous reading of Sacred Scripture, in whose pages Christ and the Church resound. Seek the Lord in the liturgy, especially in the Eucharist, the summit of Christian life, which signifies and brings about the unity of the Church in the harmony of charity. Look for it in the study and in the ordinary. Seek it also in the realities of our time, knowing that nothing human can be foreign to us and that, free from all worldliness, we can animate the world with the leaven of the Kingdom of God.

The path of interiority in the school of San Agustín

But the search for God “presupposes the path of interiority, knowledge and love of the Lord, in the school of Saint Augustine”, Francis pointed out, citing the invitation of the Bishop of Hippo to find oneself in one’s interiority – “Not to go out of yourself, constantly enters you; the truth dwells in the inner man”– to explain that there “the light of the inner Master illuminates temporal realities for us”.

The Pope also reminds the regular canons of Saint Augustine of the importance of their Confederation, instituted by John XXIII in 1959 and intended to promote communion between congregations that share the same charism. He also highlighted the objectives of the organization and, among them, mutual aid, between congregations, “in regard to the spiritual dimension, the formation of young people, ongoing formation and the promotion of culture.” And he explained that through confederations the isolation of individual congregations is avoided, which is dangerous.

We must be very careful to preserve ourselves from the disease of self-referentiality and guard the communion between the different Congregations. They are aware that everyone is in the same boat and that “no one builds the future isolated or with their own strength, but by recognizing themselves in the truth of a communion always open to encounter, dialogue, listening and mutual help”.

“Practicing the spirituality of the encounter: it is essential to live synodality in the Church”

Adapt to the circumstances of the time

And then the Pope specified that consecrated life “must adapt to the circumstances of the time”, hence the indication to the canons regular to also adapt to the different places and cultures in which they are present, “always in the light of the Gospel and of one’s own charisma”, because memory is good if it is fruitful, otherwise it is archaeological, “it becomes museum pieces”. “Perhaps worthy of admiration – said Francis – but not imitation”. Instead, the memory of one’s own history, of one’s roots, “Deuteronomic memory” – as the Pontiff called it – “helps us to live fully and fearlessly the present to open ourselves to the future with renewed hope”.

Finally, the Pope urged the canons regular of Saint Augustine to review their charism and “strengthen the communion of life following the example of the primitive apostolic community”, “anticipation of full and definitive union in God and the path towards it”.

The spirituality of the encounter is essential for synodality – Vatican News

The training offer of the Regina Apostolorum Pontifical Athenaeum aspires to excellence
Nueva Esperanza, the largest archaeological find in Cundinamarca that remains under the scrutiny of ...
EVERYTHING READY FOR THE 72nd EDITION OF THE LIVING NATIVITY SCENE OF RIVISONDOLI
Tweet
Share
Share
Pin