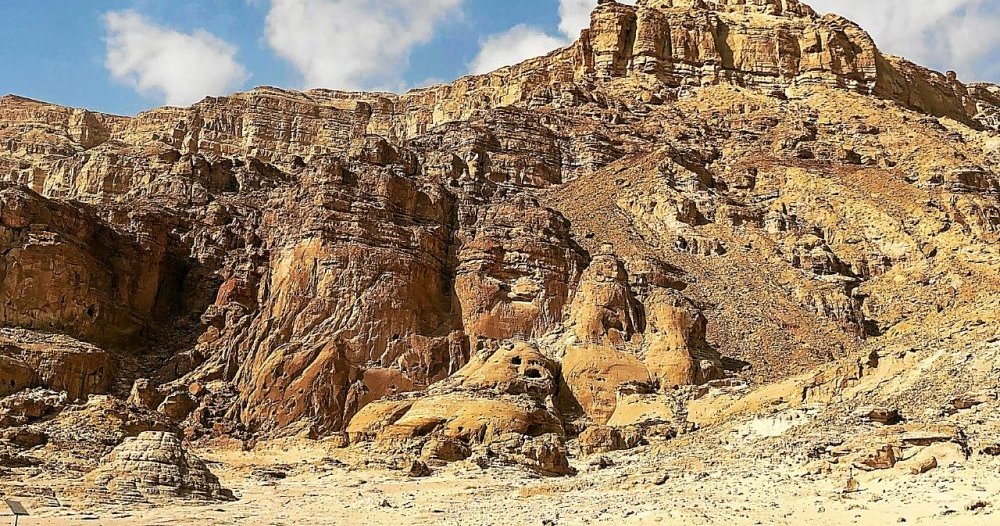 
“It is here that God wanted to reveal himself to Humanity and today we walk on the path he gives us”, intones Father Jacky-Marie Lhermitte while surveying the Negev desert, in the south of Israel. . “Through walking, we can see like the one who looks at us,” he continues.

The parish priest of Saint-Pierre and Saint-Paul de Bois-Guillaume in Rouen will punctuate his pilgrimage to the Holy Land with a meal alongside King Abdallah II of Jordan.

The Negev remains a region that fascinates men, straddling spirituality and ancestral trade routes. First biblical characters to settle there: Abraham and Isaac stay in Beer Sheva, nicknamed the city of the patriarchs, where is the well of Isaac that the latter would have built after having decided to honor the unique God.

Nomads, Philistines, Nabataeans, Ottomans, Israelis, since then, all have lived between these endless dunes which were covered by the Tethys ocean millions of years ago. Perched on a rocky and dry hill, the citadel of Avdat, listed as a UNESCO World Heritage Site, was built in the 3rd century BC. JC. It served as a caravan stopover on the incense routes. These linked Yemen to Gaza over 2,400 km. The goods were then exported to European ports in the Mediterranean such as Venice and Marseille. Highly prized, incense served, and still serves, to honor the signs of God’s presence, by letting the smoke rise to the sky. In addition, Avdat allowed the Nabataeans to become rich, despite the gusts of sandstorms, and the strong temperature variations. Still visible, remains sit enthroned here and there, such as a wine press, and especially the Saint-Théodore church which dates from the Byzantine period, and whose columns and some vaults are still miraculously standing. “It gives an image of what these small Christian communities were like,” observes Father Jacky.

Further east, in the Judean Desert, the landscape is lunar. It is the lowest point in the world: the Dead Sea, located at least 430 m below sea level. Its retreat is visible to the eye, as well as the coagulation of the salt crystals that form everywhere on its surface. “It will be gone within 15 to 25 years according to scientists,” laments Clauda Aviram, a local guide. From the road, you can make out Massada, a legendary fortress, and its still very well preserved thermal baths, which sit enthroned at the top of an isolated mountain. In AD 73 J.-C, the Jews folded up on the heights opposed to the Roman invaders. Choosing collective suicide rather than surrender, they became the symbol of the resistance of the Jewish people. It is also at Masada that army officers and fighter pilots of the Tsahal, the Israeli army, receive their insignia.

Jerusalem, spiritual city is located a few hundred kilometers away. De facto capital of the State of Israel, it is the meeting point of the three great monotheistic religions. “We cannot say that the city was only Jewish, it has always been a crossroads of civilizations”, notes William Shomal, auxiliary bishop of the Latin Patriarchate of Jerusalem since 2010. And to add: “Negotiations and wars have not resulted in peace, we are now expecting it from above”. In the western suburbs of Jerusalem, the abbey of Abu Gosh is part of the French national domain. The tricolor flag flutters in the wind. “We are here as a cordial presence at the source of our faith and listening to the State of Israel”, explains Brother Olivier in a message of peace. As Israeli students emerge from the monastery, smiling, the call to prayer resounds and begins the sunset.

Paris-Orly/Eilat (Ramon): from €150 with Transavia (about 5 hours flight)

– Ramon inn Mitzpe Ramon hotel : from €100 per night, breakfast included, located next to the Ramon crater.

– Isrotel King Solomon in Eilat : from €165 per night, breakfast included.

Entry into the territory: A visa is not required either in Israel or in the Palestinian Territories, for a tourist stay less than or equal to three months (this authorization can be extended by three months on justified request). Entry and exit stamps are not affixed to French passports. On the other hand, the Israeli border police issue the traveler a blue paper sticker which should be kept during their stay.

Screening: For security reasons, all travelers may be subject to extended screening at Tel Aviv Ben Gurion Airport.

Along the west coast (Tel Aviv, Haifa), the climate is of the Mediterranean type. In the south of the country, the climate is desert. In summer, temperatures are particularly high. The reverse happens in winter.

Israel: at the crossroads