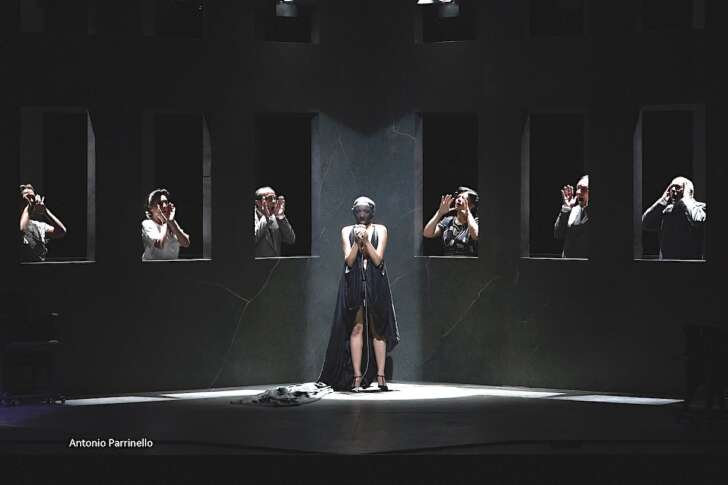 On the evening of 11 January, a packed Teatro Duse applauded the first performance of a significant Pirandello opera Thus it is (if you like), directed by Luca De Fusco and performed by Eros Pagni and a well-chosen cast.

One of the key texts on which Pirandello’s great themes revolve, including the unknowability of reality. Author not easy to understand immediately, both in the short stories and in the theater, Pirandello seems to solicit reflection from the introspective spectator, detached observer of a provincial-bourgeois world (from which he himself comes), and yet tolerant, for the necessity of survival, of the liturgy of appearance and of what “people think”.

Escaped from an earthquake, they arrive and settle in a small provincial town a prefectural employee, Mr. Ponza, his wife and, in a nearby house, his mother-in-law, Signora Froia.

The trio lead a private life, without showing any particular cordiality towards their fellow citizens who, out of courtesy and curiosity, would like to welcome them.

Among these are the members of the family of councilor Agazzi, hierarchical superior of Ponza, who quiver with curiosity, especially on the basis of the fact that, while the man often visits his mother-in-law, no one has ever seen his wife, so as to question her ‘existence.

In vain the common sense and irony of Laudisi, Agazzi’s brother-in-law and symbolic character of the drama, tries to bring the relative back to more concrete visions.

The small clan will also look for confirmations among the documents of the commune of origin of the new arrivals, without finding any.

Suddenly, the mother-in-law, Mrs. Frola, shows up at the door of the house of the gathered relatives and, in front of a symbolic microphone (not telling oneself is like not existing, the private “political” of small towns?), tries to justify the behavior of her son-in-law , who would keep his daughter locked up for a sort of protective attitude.

But soon after the man, Mr. Ponza, declaring that his first wife would die, that his current wife is her second wife, kept hidden for a sort of concern for her mother-in-law who, mad with grief, continues to believe that her daughter is alive .

And shortly after the mother-in-law comes back with a different truth: the wife, back home after a long period of hospitalization, would be alive, the husband crazed with pain would have refused to recognize her and, to avoid further trauma, a second would have been simulated marriage to the same woman. But what is the truth, indeed, what is the reality?

In the text under examination, in addition to the denunciation of the mockery of life and its presumed reality, all the references of Pirandello’s thought are presented, first of all the respect for human pain which has no meaning (as for the Christian) but detects and he pities his ineluctability as well as his uselessness: perhaps for this reason the exhausted humanity of the first post-war period identified with his work, feeling the dismay and the spiritual falls he recounted.

Secondly: human behaviors are influenced, whether we want to recognize it or not, by pressures and customs, by the induced fantasies of the environment around us.

And again, as Benedetto Croce had to define this text, it highlights the “drama of the civil status”: no other truth is granted than the legal one that results from the agreement of certain written pieces of paper; if these are missing, everyone can create the reality they want.

A pleasant and flowing show, with a suspense maintained until the last moment, an Eros Pagni worthy of himself, surrounded by a completely appreciable cast, Anita Bartolucci (Mrs. Frola) Giacinto Palmarini (Mr. Ponza) and others eight actors.

Teatro Duse, So it is (if you like), or if it appears to you? – Liguria News