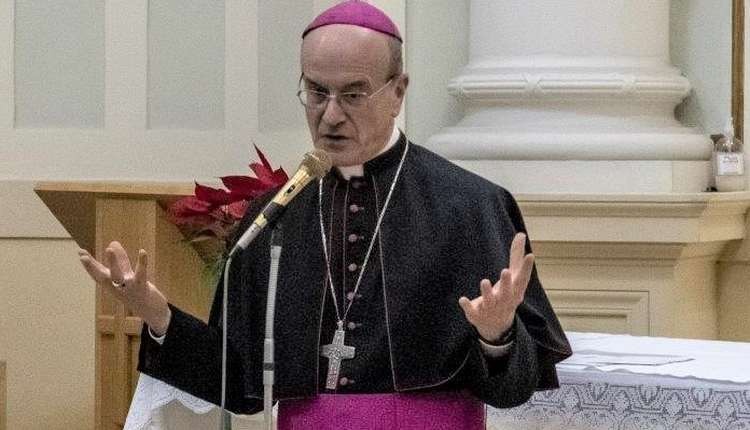 – “Dear faithful of the Archdiocese of Urbino-Urbania-Sant’Angelo in Vado, I address you on the day in which the news is publicly announced that the Holy Father has appointed me as your new Archbishop, succeeding Mons. Giovanni Tani.

It is no surprise to many of you that I am here to greet you as the new Pastor of your ancient and glorious Church.: the project of the Holy See, in agreement with the bishops of the Marches, to unite together – in the person of the bishop – the Archdiocese of Pesaro and that of Urbino-Urbania-Sant’Angelo in Vado was not a mystery, for some time.

I understand very well the fears of those who, having the future fate of the centers and communities of the hinterland at heart, see in this choice the risk of abandonment also by the ecclesiastical authorities, alongside the possible loss of other garrisons of a civil nature in the territory.

It is inevitable that all of this is considered an unfair and unjustified impoverishment of
a land rich in history, traditions, living and dynamic ecclesial and social realities, despite the
depopulation phenomenon.

It is an unprecedented transition for Urbino (and for Pesaro)painful and certainly not easy to accept, but we will try together – bishop, priests, deacons, consecrated men and women, lay faithful – to read the “signs of the times” to open ourselves to the new things that the Spirit is preparing for the future of our Churches and seize the positive opportunities.

After just eight months of pastoral service in the Archdiocese of Pesaro, the Holy Father asks me for my willingness to “enlarge” the family.

I accepted with a lot of fear, without any presumption, but only from the point of view of the service. Inevitably a bishop shared between two dioceses suggests an impoverishment of the presence of the pastorin the many moments of community life, to the detriment of all.

Personally, I will commit all my energies to being close to the communities, starting with the more scattered and peripheral ones. But let me use an image I draw from the world of music.

The bishop is not a soloist, but rather is similar to a conductor; and if the orchestra expands and is enriched with instrumentalists, there is the possibility that all together they can perform a more beautiful and richer music: this is the great challenge that unification puts before us.

I truly trust in the fact that a more intense pastoral collaboration – which is already well underway – between the Archdiocese of Urbino-Urbania-Sant’Angelo in Vado and that of Pesaro can be transformed into mutual enrichment.

However, I want to say it, the true strength of a local Church lies in the people who live it and
they animate it. My thoughts therefore go to the priests and deacons in their daily service of
proclamation and testimony of the Gospel, alongside the people who live in the parishes; at
numerous monastic communities, true “beacons” of spirituality from which many can draw light and
hope for the journey; to female and male religious communities with, among others, theirs
particular contribution of welcoming and accompaniment of many young students; at
brotherhoods, which keep alive the ancient and ever new traditions of faith; to lay associations and movements, which propose incisive paths of human and spiritual growth; to the many people of good will who actively participate in ecclesial life; and to the many other realities of faith and testimony of charity that I will gradually learn to know and appreciate.

I would like to express to all of you my esteem and commitment as a pastor to meet you, listen to you and encourage you on your journey together.

I will come among you aware that, as bishop, I do not possess the “synthesis of charisms”, but I am called to exercise the “charism of synthesis”, that is to say that my first commitment will be to promote and safeguard communion and unity of the Church in the variety of gifts that
they enrich.

Naturally, all of this has a precise aim: the mission of proclaiming Christ and his Gospel to all, as the Synod itself celebrated in your Church – anticipating the synodal journey of the universal Church – confirmed.

The blocked items will be displayed after consenting to the use of cookies.

Urbino boasts the presence of an ancient University which makes it a first-rate cultural and educational centre. I wish to confirm all my care and attention towards this prestigious University and towards all its teaching staff, with particular regard to the thousands of young students who attend it.

To the women and men of local institutions and administrations, committed to the service of the common good and of citizens, often operating in difficult conditions, I express my esteem and my willingness to meet, dialogue and collaborate.

To all those involved in the world of work, professions and business I say: courage! Your daily commitment is essential in promoting the area, creating job opportunities for young people and acting as a “pole of attraction” to make the beauty known to the outside world
and the good that there is in this wonderful land.

I thank Archbishop Giovanni Tani, pastor of the Urbino Church for over eleven years to datefor the wisdom, the refined humanity and the firm meekness with which he guided the Archdiocese and for the fraternal welcome he has shown me since my arrival in Pesaro.

I thank him in advance for the help he will want to give me during the handover. I address a grateful and affectionate thought to Archbishop Emeritus Mons. Francesco Marinelli: may the Lord reward him for the good he has done in favor of the diocesan community.

I bless families, the heart and foundation of ecclesial and social life; I bless the elderly, with the patrimony of memory and wisdom which they bear; I bless the children and young people who deserve the utmost educational care so that they may become protagonists of the future; I bless the sick and the indigent, who invite us to stop and be close to them. I bless you all.

May the Patrons San Crescentino, San Cristoforo, San Michele Arcangelo and the Virgin Mary watch over the journey of the Church of Urbino-Urbania-Sant’Angelo in Vado and accompany our steps.
Pray for me. Peace be with you!.

WHO IS Mgr. SANDRO SALVUCCI

Sandro Salvucci was born in Macerata on April 3, 1965 and grew up in his family, made up of parents and two brothers, in Corridonia. He completed his studies by attending the Galileo Galilei scientific high school in Macerata where he obtained his high school diploma in 1984.

After two years of university experience, he entered the Archiepiscopal Seminary of Fermo, completing his institutional studies in philosophy and theology at the local branch of the Theological Institute of the Marches, where in 1990 he obtained the Baccalaureate in Sacred Theology.

Having become a student of the Almo Collegio Capranica in Rome, he completed his specialization studies in Moral Theology at the Pontifical Gregorian University where he obtained the title of Licentiate in Sacred Theology.

He was ordained a deacon on 6 December 1992 and a priest on 25 September 1993. From 1994 to 1998 he was parochial vicar of the parish of SS. Annunziata of Porto Sant’Elpidio. From 1998 to 2012 he was director of the diocesan vocational ministry; from 2001 to 2006 episcopal delegate for the permanent diaconate and, in the same years, director of the diocesan house of spirituality “Villa Nazareth”.

In 2006 he was called as rector of the Archiepiscopal Seminary of Fermo, a position he held until 2014. In 2008 he was parish administrator of the Sant’Alessandro parish of Fermo for a year. From 2014 to 2022 he was parish priest of the Pastoral Unit of Montegranaro (parishes of SS. Salvatore, S. Maria and S. Liborio).

Over the years he has been a member of the College of Consultors, of the Presbyteral Council and of the Diocesan Pastoral Council. From 2018 to 2022 he held the position of priest who was the principal animator of the Diocesan Movement of Fermo, an expression of the service of the Focolare Movement at the articulations of the local church.

Alongside his pastoral ministry, since 1995 he has carried out the teaching service of various courses in moral theology at the Theological Institute of the Marches.

On 12 March 2022 the Holy Father appointed him Metropolitan Archbishop of Pesaro. His episcopal ordination and the beginning of his ministry took place in Pesaro cathedral on 1 May 2022.