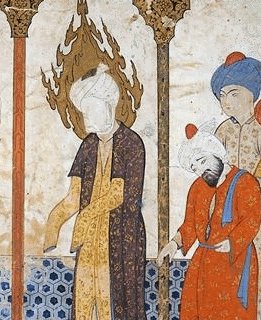 Discovering a world through art that we don’t really know.

Thinking about Arab worldour mind can only travel to those lands magical and mysterious, where smells and sounds seem to drive a life punctuated by prayers and lived in the markets. Talking about Islamic art, however, is more complicated especially if we consider that it is closely linked to religion.

As Westerners of the twenty-first century, hearing about “spiritual” things makes us think of inquisitive states, which prevent us from expressing ourselves and choosing. Actually, the fact that this way of doing art be so attached to spirituality, it just makes it much more interesting. On the other hand, as with Islamic art, even Italian art boasts a period in which the watchword was religion and for this we should not be scandalized too much.

The Islamic worldno doubt, it is closely linked to one’s traditions and respect for one’s religion, which is clearly reflected in the artistic spirit. For this, anthropomorphic representation is (in theory) absent in Islamic artsince only Allah (which nothing else means that The God) is able to “create” human figures and therefore imitating his work would be impossible. Interestingly, not even Allah himself was ever depicted, while Muhammad (Italianised as Mohammed) is portrayed with a head of flames and a white veil.

The question is, of course, controversial if we consider the fact that human figures are often represented in the art of the Arab world but never inside the mosques.

Just as it happens for Christians, in fact, the rules are many and precisebut not always followed to the letter. This is, therefore, a first step in clearing customs of the idea that all Muslims are tacit executors of the rules of the Koran but also in order to observe those Muslims with immense spirituality from a different point of view.

The “prohibition” of anthropomorphic representations in Islamic art it is not fully explicit in the Qur’an, but concerns the attempt to prevent the creation of other idols: Cor. V, 90 «In truth, the wine, the maysir, the idolatrous stones (al-ansab, pl. of nusb, lit. “stone/stele”) and the divinatory arrows are filthy (rijs), works of Satan, avoid them». To work around this problem, sacred places were decorated with floral ornaments, Arabic inscriptions and geometric motifs; the most famous decorative element was the so-called “arabesque”given by the union of geometric shapes and calligraphy.

Mshatta, the castle in the desert: a representation of Islamic art

Emblem of the controversial world of Islamic art is the decoration of the facade of the palace Mshatta in Jordanone of the so-called “desert castles”.

This decorative facade in limestone has triangles decorated in the center with vegetal and zoomorphic elements: the interesting thing is that the animal representations are found only on the left side of the facade, since the right side corresponded with the wall of the mosque attached to the palace .

With Mshattawe notice clearly the will to avoid animal or human representations in the sacred places of Islam.

The decoration of the left side is entrusted to triangles, in the center of which is a flower; at the base of the latter, we notice representations of animals on the sides of a vase. The decorative motif of the right side is the same, except that the animals are absent and replaced by floral motifs, thus respecting the tradition according to which representations of divine creation cannot be found inside sacred places.

Islamic art: in the other Desert Castles

They are just other desert castles, like that of Qusayr ʿAmra And Qasr al-Gharbi, to give us further evidence of how much this “prohibition” is actually limited to sacred places.

But what are desert castles? Erroneously known as castles, these are actually palaces (thisur, exactly) that were built along the routes of the caliphs and served as a connection between the Near East and the Peninsula; it is no coincidence that there was also an audience hall inside them.

In eastern Jordan it is of particular interest Qusayr ʿAmra, famous for representations of women at the spa, dancers, workers and men hunting. Moving towards Syria, however, Qasr al-Hayr al-Gharbi it has as many representations of female and male faces, of dancers and hunters. From this we immediately realize that the ban exists, albeit not explicitly, but which, like all bans, is freely respected or not.

Knowing and understanding Islam is difficult, but being fascinated by it is the easiest thing that can happen and its art is a perfect metaphor for this contrasting feeling, which can only be resolved if one frees oneself from prejudice and carefully observes a grandiose people who, in less than a century, have been able to create one of the greatest empires in history.

Qusayr ‘Amra, fresco of a woman at the baths

Islamic art and the ban on representing creation