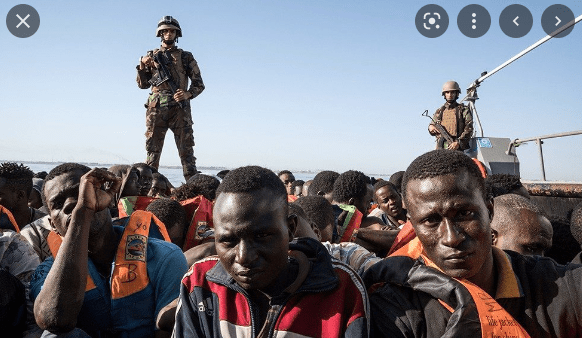 Finally on July 27 last in the Foreign and Defense Committee of the Chamber, the deputies dem Palazzotto and Boldrini, the group leader of Leu Fornari and the former 5 Star Syrian Movement, voted against the possibility of continuing to support the Libyan Coast Guard, I ask everyone the parties that have the courage to vote against criminal and necrophilic policies, which have caused horrible tragedies in recent years.

The Libyan Coast Guard in recent years has captured as many as 85,000 refugees fleeing in the Mediterranean and brought them back to Libyan concentration camps where men are subjected to endless torture and women are raped. Last year as many as 35,000 refugees were captured and brought back to Libya and the UN itself states that “Libya is not a safe place for migrants to land”. Other than “improving the conditions of the reception centers” as required by the memorandum! We are facing an endless chain of crimes both by the Italian government and by the EU, and by Libya. Indeed, the Italian government helps the Libyan Coast Guard to stop the boats on the run and bring them back to Libya. I think that between 50 and 100,000 migrants are buried in the Mediterranean, not to mention the dead in Libya. Faced with such horror, we appeal to the Italian parties to refuse to ratify a criminal agreement such as the memorandum.
This year alone we mourn the death of 1553 migrants in the Mediterranean, we also mourn the death of hundreds of refugees in the Sahara to arrive in Libya as well as in the Atlantic Ocean to arrive in the Canary Islands and then in Spain.

“It is unacceptable – wrote the bishop emeritus of Tangier in a pastoral letter – that impervious borders are claimed for the pacific of the Earth and that they are tolerated in borders permeable to money from corruption, sex tourism, trafficking in persons and the trade of Weapons”.

Fasting for justice in solidarity with migrants

August 3, the first Wednesday of the month, is our fasting day in solidarity with migrants that we have been practicing for four years in front of Montecitorio, the name of those who fast in houses in monasteries or in front of the prefectures of Italy. Unfortunately, the Rome police headquarters have been banning us from doing this in front of parliament for almost a year. We consider this prohibition a serious violation of a right guaranteed to us by the Constitution. This month, as for four years, we will fast in Riace, with Domenico Lucano and with the young people who participate in the spirituality work camp of the Comboni missionaries, which has become a symbol of another welcome so different from that promoted by the EU and by the Italian government.

In fact, our fast this month is intended as a protest against the renewal of the Italy – Libya memorandum, a cry for the thousands of migrants who died in front of the closed borders of the rich world. The Italy-Libya memorandum was signed on February 2, 2016 and expires on February 2, 2023. But it will be automatically renewed for another 3 years, if they do not cancel it by November 2, 2022 this agreement obliges Italy to provide aid to the Libyan authorities , in particular to the notorious Libyan Coast Guard, to reduce the smuggling of migrants and commits Libya to improve the conditions of its reception centers. The result is there for all to see.

Father Alex Zanotelli, on behalf of the fasting of justice and solidarity with migrants

In recent years, the Libyan Coast Guard has captured as many as 85,000 refugees fleeing in the Mediterranean. A crime that Italy is financing (A. Zanotelli) – FarodiRoma