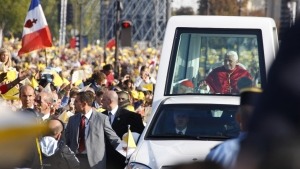 Since the death of Benedict XVI, a generation of Catholics has made itself particularly heard. These are the thirties and forties, expressing their attachment to the late pope, who will have marked the young people of his pontificate by his gentleness, his brilliant writings and his spirituality anchored in Christ as a Person. But what exactly makes it possible to declare oneself of the generation of a pope? And is it right to claim the generation of a single pope?

Having, since the announcement of the death of Benedict XVI, this haunting refrain in the head: “Bééééé-nédé-tto”. This is perhaps what best defines the “Benedict XVI generation”, with which today’s thirties and forties identify. A very special refrain, dragging on the first syllable and emphasizing the last, that thousands of young people chanted with enthusiasm in Cologne (August 2005), Sydney (July 2008), Paris (September 2008) or even in Madrid (August 2011). A clamor buried in the memory of those who are now more or less settled in life, and which resurfaced on the last day of the year 2022 when the whole world learned of the death of Pope Emeritus Benedict XVI.

Linking a generation to a pope goes back to John Paul II. We do not speak of the “Paul VI generation” nor of the “John Paul I generation”. Undoubtedly because John Paul II always showed particular attention to young people, and the latter listened to him in return. The very evening of his election, he told them: “You are the future of the world and the hope of the Church”. Then in 1984, he invited young people to come together in Rome to celebrate a special jubilee for young people. The sketch of JMJ, which will be officially launched in Buenos Aires in 1987. By making young people a priority target of papal pastoral care, he awakened a generation, deeply united behind “their” pope, to a firmer and more personal faith.

The pope of his youth

To claim the generation of a pope is to recognize that his example and his teachings have shaped and guided his own person during these decisive years which are the passage to adulthood. “He is the Pope of our young years, when we are between 15 and 25 years old”, estimates Louis Manaranche, associate professor of history, director of the preparatory classes of the Stanislas College and co-director of the Observatory of modernity. of the Bernardine College. “Benedict XVI accompanied my preparatory years, then my studies at Normale Sup. These are years when I read a lot, I was touched by his intellectual approach, his style of teaching. His books have allowed me to link my life of faith and my intellectual life, so that they move forward in tune. I worked, studied his encyclicals with the groups of young people I frequented, Even in particular. His texts, certainly demanding, but clear and easily accessible, represented fundamental nourishment for the spiritual and intellectual life of young Christians. They united entire groups of young people in receiving a decisive pontifical teaching. It is all of this that makes you belong to this or that generation of pope”.

An even more significant attachment for the priests ordained under his pontificate. Benedict XVI, “it was the pope I named in my first mass when I was ordained”, confides Father Olivier Foulon, of the diocese of Nanterre, while he was meditating in Rome on the day of his funeral , remembering “the example of all that he was able to teach us by his life and by his words”. An almost filial bond. “It was also the pope who instituted the Year of the Priesthood and all his teachings are a foundation for me,” he adds.

It is this same admiration mixed with affection that Father Timothée Besson, 32, vicar in Villefranche-sur-Saône feels. “Benedict XVI is the pope of my seminary years,” he confides. “I took a close interest in his writings, it creates an attachment. For me, Benedict XVI is a holy man, very gentle and full of humility, a bit like a grandfather. His intimacy with Christ was edifying. And his texts suggest that he had based his life on this intimacy”.

Writings that mark a generation, but gestures, too. This is where WYD proves to be a founding experience for many young Christians. The pope is there, present in their midst and bears witness before their eyes to the faith that animates him. Louis Manaranche remembers this new impetus instilled by Benedict XVI at WYD in Madrid by establishing a vigil of adoration: “Benedict XVI immersed us in the heart of the Christian mystery, both through his teaching and through a very deployed liturgical life”. Importance of silence, sense of the sacred, respect for the liturgy… So many aspects that will have shaped a whole generation of the faithful.

Joseph Buchet, 36, business manager, was touched by the character of Benedict XVI, courageous, standing in the storm: “On several occasions, he was misunderstood by society, abused by the media, but he did not weaken. The most beautiful illustration was this gesture, at the WYD in Madrid, of standing up in the storm while his team told him to leave to take shelter. He chose to stay with the young people. For me, it is a magnificent example”.

A heritage to explore

To claim a pope, isn’t this also to show oneself particularly available to receive his inheritance? Admittedly, the pope of a generation first accompanies the latter during his lifetime, through his encyclicals, his teachings and his presence at WYD. But at the same time he bequeaths them a precious heritage, to be discovered over time. Those who knew him thus feel invested with the mission of exploring this heritage from top to bottom in order to make it shine and bear fruit. This is the case of Alexia Vidot, journalist at Life, converted at the very beginning of the pontificate of Benedict XVI, at the age of 20. In his recent book Dear Benedict XVI (Editions Emmanuel), she addresses “her” pope in the form of letters and confides: “I am only one member among many others of the ‘Generation Benedict XVI’ who knows that I have not yet received everything of what you wanted to convey to him. Now, I refuse to lose any crumb of the eight rich years that you spent on the throne of Peter”. An invitation, launched to an entire generation, to explore his abundant theological work.

The limits of claiming the generation of a pope

If it is legitimate to claim the generation of a particular pope, because he marked a youth by his writings, his gestures and transmitted to him a heritage, this attachment cannot be exclusive, nor be defined by opposed to another generation. “Being of the generation of a pope does not mean being resistant to the pontificate of his successor”, specifies Louis Manaranche. “If I recognize myself in the ‘Generation Benedict XVI’, this does not mean that I do not try to allow myself to be shaped by the pontificate of Pope Francis, to listen to his teaching, to understand his priorities, to observe a certain continuity… When continuity is not obvious, I try to see the nuances, to understand where they come from”.

To be of the generation of a pope does not mean to be restive with regard to the pontificate of his successor.

The risk of identifying with a single pope is ultimately to close oneself to the others, who nevertheless all bring something to the universal Church. Since the Second Vatican Council and thanks to successive popes, the Church has been rich in powerful evangelical intuitions. If Paul VI insisted on the essential vocation of the Church to evangelize those who do not know Christ, John Paul II worked more in favor of the “new evangelization”, initiating new methods and a new language. As for Benedict XVI, he is the pope of the personal relationship with Christ, the key to the encounter with God. Finally, Pope Francis never ceases to call each baptized person to become a “disciple-missionary” and to go to the peripheries of the Church.

Although a necessarily closer bond is forged with the pope who trained our youth and contributed to shaping the person we are today, this does not prevent us from continuing to be nourished by the contributions specific to each pontificate, and, enlightened by kind, grow in faith.

Can we claim the generation of a single pope?