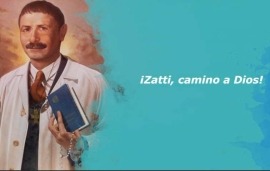 (ANS – Córdoba) – A new musical production has arrived dedicated to the saint of the poor and the sick, the relative of all the poor, the holy nurse of Viedma: it is the song “Zatti camino a Dios” (Zatti on the way to God), born as a challenge to offer a more festive and lively material than the equally beautiful song “La aventura de sanar” (The Adventure of Healing). In fact, the authors of both passages are the same: the Salesian Brothers Isaac Aguilera Rebolledo, of the North Argentina Province (ARN), and Stefan Crescia, of the South Argentina Province (ARS).

“Neither of the two works aimed to be better than the other, but the songs simply complement each other, expressing this double face of Salesian spirituality, which Mr. Zatti knew how to embody up to the levels of holiness” explains Mr. Crescia, author of the text.

The text of this new production seeks to reflect the identity of the new Salesian saint, highlighting the oratorian traits that came to life in the Viedma hospital: the stretchers were his playground, a smile meant a “good night”. Daily life, the poor and daily holiness – all aspects that Don Bosco himself lived in Valdocco – find space in the passage in question.

Again, along the notes of the song, other central elements of Christian life and of Zatti’s life are underlined: setbacks and adversities; and the Cross, “Christian symbol par excellence, which knows how to contain Death and Life, since it is there that Christ experienced both – continues Mr. It grows –. Thanks to this, everything makes sense in the Christian life and in the discipleship of the Master, which in Don Bosco’s story has a singular parallel in the well-known dream of the roses with thorns, in which those close to him saw Don Bosco walking on the roses, but no one he noticed the wounds caused by thorns. This bond between the Rose and the Thorn, between Life and Death, Mr. Zatti lived it in his flesh, through the numerous difficulties he encountered in the administration of the hospital: he experienced the Crucifix, and Love was able to redeem him”.

While as for the refrain sung by the choir, it expresses Zatti’s role as Christ’s remedy, that is, as part of Christ’s project to heal Man.

Speaking of this second work dedicated to Zatti and of the synergy now developed with the Salesian coadjutor of ARN, Isaac Aguilera Rebolledo, Mr. Finally, Crescia shares: “The work of composition is more than satisfactory. With Isaac we complement each other extraordinarily. We usually start the work with a piece of writing that I share with him, which he reads and re-reads to find the right melody for what the piece expresses. At the same time, we accompany each other in the creative process: Isaac comments on the writing and I on the music”.

To listen to the song “Zatti camino a Dios” click here.

The Week of Spirituality and Culture returns to Moio della Civitella
Art and spirituality. Small is beautiful and opens the heart in God
The Maltese Way, the Camino de Santiago also passes through Malta
Tweet
Share
Share
Pin