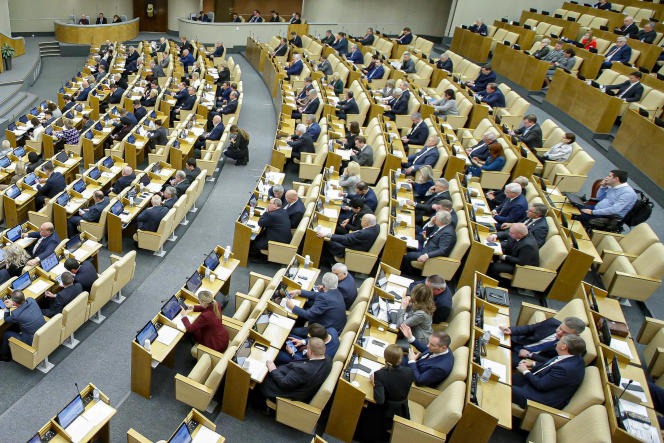 The Russian Parliament definitively adopted, on Thursday 24 November, a law prohibiting the “propaganda” of the “non-traditional sex” – or homosexual relations, but also pedophilia and sex change, which nevertheless remains authorized in Russia. The previous law, which dated from 2013, only concerned the “LGBT propaganda” with minors.

With regard to homosexual relations, the text adopted at third reading is particularly vague: it suffices to ” to arouse interest “ about this type of relationship to fall under the law. A deputy even expressed, in session, his fear of no longer being able to criticize or denigrate homosexuality publicly… In an equally imprecise manner is also prohibited “denial of family values”.

These prohibitions concern “the media, the Internet, literature and cinema”, or even advertising, that is to say the entirety of the public domain. Violations will be punished with heavy fines, up to 10 million rubles (160,000 euros), and foreigners who break this law may be deported.

The Duma, the lower house of Parliament, on the other hand gave up during the second reading vote on Wednesday, to provide for prison sentences in the event of a repeat offense, or even to formally extend the ban to video games. Some MPs had already started compiling lists of games “doubtful”.

Read also: Article reserved for our subscribers The world according to Putin: the cross and the banner

Concern for works of fiction and literature

During the preparatory work, we were able to hear elected officials rebel against certain works of fiction. “Do you realize, the film Call Me By Your Name has more than twenty fan groups on [le réseau social russe] VKontakte, advanced for example the deputy Alexandre Khinchteïn at the podium. It’s a love story between a boy and a man. The cartoon South Park… We see a pedophile school cook. Peppa Pig, whom we think we know well… In one episode, a polar bear shows a portrait of his family, his mother and his “other mother”. »

Faced with such declarations, professionals wonder about the films that will disappear from the screens – from the most restrictive lists of works explicitly addressing the theme of homosexual relations to the broadest, where the subject is approached in passing. Same question in the literature: the director of the publishing giant Eksmo, Oleg Novikov, estimates that 50% of the books published by his house could be threatened. Among them, all the work of Viktor Pelevin, but also a biography of Tchaikovsky, who happens to have been homosexual. Deputy Khinchtein sought to reassure by explaining that the classics of literature, such as lolitaof Vladimir Nabokov, would not be affected, but without explaining the legal basis on which he was expressing such an opinion.

You have 52.41% of this article left to read. The following is for subscribers only.