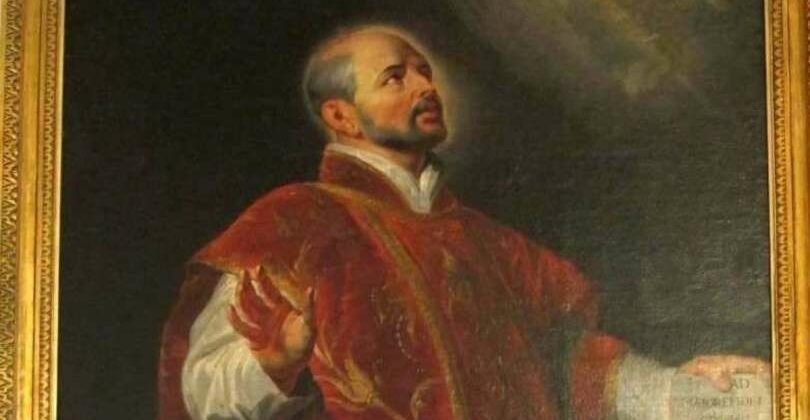 Reading the lives of the saints during the convalescence following the siege of Pamplona, ​​Saint Ignatius of Loyola put his thoughts in order and discovered a knighthood higher than the earthly one, eventually taking the flag for Christ

Pope Francis places at the center ofcourt hearing on 7 September a pivotal episode in the life of the founder of his religious order to which he belongs, the Jesuits. To explain the discernment, in fact, he focuses on the convalescence of Saint Ignatius of Loyola after the siege of Pamplona, ​​city of the kingdom of Navarre, then disputed between Spain and France. In 1521, therefore, «Ignatius is convalescing at home, after having been wounded in the leg in battle. To dispel the boredom he asks for something to read », but in the ancestral castle there are only hagiographic books, which speak, that is, of the lives of the saints. «A little reluctantly», the Pope recalls, «he adapts, but in the course of reading he begins to discover another world, a world that conquers him and seems to compete with that of the knights» as the young Ignatius conceived it.

In fact, he realizes the presence in himself of different moods. “Thinking of the things of the world – and of chivalrous things, of course he was – he felt a lot of pleasure, but when, out of exhaustion, he abandoned them he felt empty and disappointed. Instead, going to Jerusalem barefoot, eating nothing but herbs, practicing all the austerities that he had known habitual to the saints, were thoughts that not only consoled him while he lingered there, but also left him satisfied and full of joy after abandoning them. The saint wrote in his own Autobiography. It was the discovery of the world of profound tendencies, and also of states of spiritual consolation and desolation.

«In this experience», the Pontiff summarizes, «we can note two aspects above all. The first is the time: that is, the thoughts of the world are attractive at first, but then they lose their polish and leave empty, discontented, they leave you like this, something empty. The thoughts of God, on the contrary, at first arouse a certain resistance – “But this boring thing about the saints I will not go to read”, but when they are welcomed they bring an unknown but lasting peace. “So here’s the other aspect: the point of arrival thoughts. At the beginning the situation does not seem so clear », but in discernment Ignatius manages to understand what really fills his heart and to set out towards holiness.

For Ignatius, convalescence was the first impact with spiritual thoughts, while usually “there is a story that precedes the discerner, a story that is indispensable to know, because discernment is not some sort of oracle or fatalism or something of laboratory, how to cast lots on two possibilities. The big questions arise when in life we ​​have already traveled a stretch of the road, and it is to that path that we must return to understand what we are looking for ». Precisely «for this reason Ignatius will suggest reading the lives of the saints, because they show in a narrative and understandable way the style of God in the life of people not very different from us because the saints were of flesh and blood like us. Their actions speak to ours and help us understand their meaning ».

The man realizes that «there is an apparent chance in the events of life: everything seems to arise from a trivial mishap: there were no books of knights, but only lives of saints. A setback that however contains a possible turning point. Only after some time will Ignatius notice it, and at that point he will devote all of his attention to it. Listen carefully: God works through non-programmable events », even the most banal. «One piece of advice I give you, beware of unexpected things. He who says: “but this by chance I did not expect”. Is life talking to you there, is the Lord talking to you or is the devil talking to you? Someone “has certainly put a hand in it: you have to understand well who did it. Then “discernment is the help to recognize the signals with which the Lord lets himself be encountered in unforeseen, even unpleasant situations, as the wound in his leg was for Ignatius. From them a life-changing encounter can be born, forever, like the case of Ignatius ».

The “unexpected” of God are very different, unfortunately, from certain human “programs”, or when man knowingly chooses evil and damages his own or others’ existence. «Faced with all the war scenarios of our time, I ask everyone to be builders of peace and to pray», says the Holy Father, «so that thoughts and projects of harmony and reconciliation may spread throughout the world. Today we are experiencing a world war », he repeats once again thinking of Ukraine:« let’s stop please ».