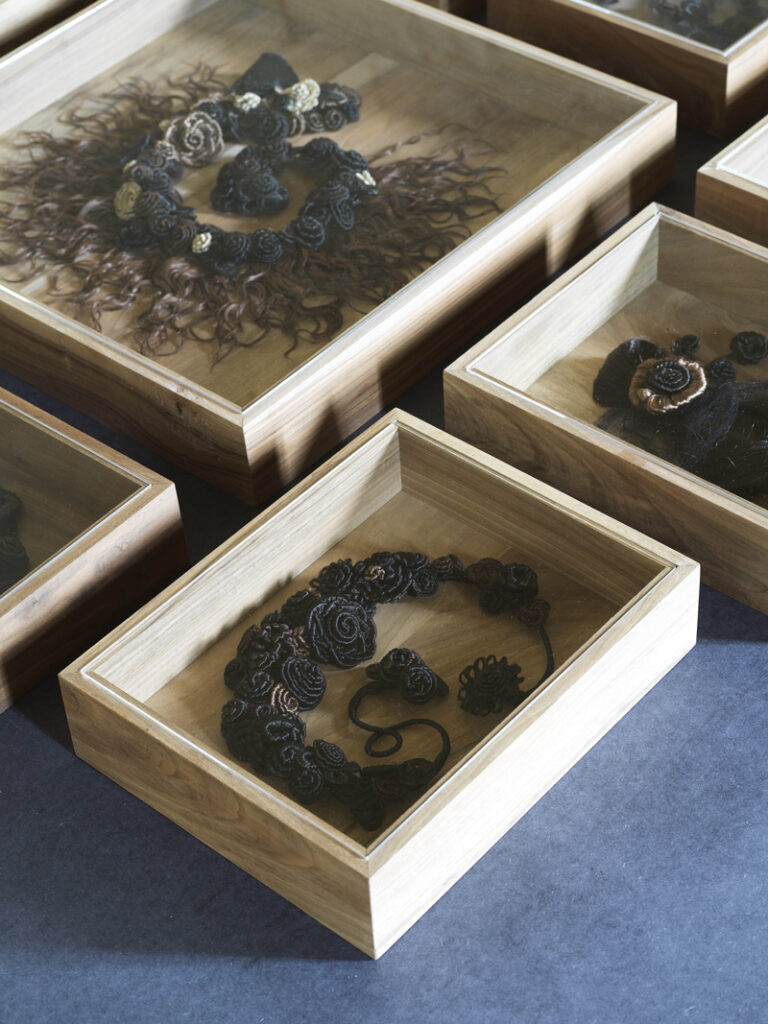 This winter, the abbey of Maubuisson, a former royal necropolis located northwest of Paris, is interested in the difficult subject of mourning. Through an approach that is at once archaeological, ethnological and artistic, the exhibition De profundis ascendam reconnects the living and their dead.

From the royal abbey founded in 1236 by Blanche of Castile, only a few buildings remain. The Revolution converted it like many religious places into a stone quarry, to then be transformed into a farm, a spinning mill or a military hospital, before being classified as a Historic Monument in 1947. This Cistercian women’s abbey, close to power during several centuries, served as a residence but also as a royal necropolis and witnessed major events in the history of France.

Today, rehabilitated into an art center by the Department of Val d’Oise, which owns it, one can imagine its original splendor by a interactive sound tour in Maubuisson Park. The abbey also puts its Gothic spaces at the service of contemporary creation: around the art center, it hosts artists in residence, exhibitions, monographic or collective, as well as a business incubator dedicated to the creative industries. In such a place steeped in history, creation can only be part of a historical continuity marked by spirituality.

This winter, the proposed collective exhibition tackles a complex subject: mourning. Why confront ourselves with our mortality, and that of our loved ones? Is our contemporary approach to death really appropriate? Why does the pain of loss make those around you so uncomfortable? The pieces presented are a mix between the results of the archaeological excavations carried out on the site in 1986 and works of contemporary art, for a reflection on the consequences and the feelings faced with the loss of a loved one. Because if we cannot be certain about what happens – or not – after death, we can still act on the post-mortem experience of the living.

The journey confronts us with different types of traces left by the deceased in the living world. The material traces include a set of everyday objects, intimate or utilitarian, that the deceased owned, and which constitute a kind of Chinese portrait of their owner, such as the hairdressers of the device of Fabrice-Elie Hubert, Henriette Menes and Camille Vidal-Naquet. Even more intimate, mourning jewelery made from hair, a popular souvenir in the 18th and 19th centuries Julie Morel. Among these heirlooms, some have a more marked symbolism such as pearl necklaces and fur coats than Julie C.Fortier presents us, each diffusing a corresponding perfume.

Because traces can also be immaterial. Smells that persist in certain places or on clothes, memories, habits, sensations. But the most disturbing trace presented here is undoubtedly this set of archive boxes containing the bones of the nuns buried in the abbey, discovered during excavations. On their metal shelf straight out of the department’s archeology department, these boxes, sometimes bearing annotations, are terribly neutral: what once constituted a person is now reduced to an object that can be disposed of. This raises the question of respect for burials: when can we consider that the deceased has lost the last bit of humanity that could lead to respect for his death?

The exhibition does not address questions of spirituality but focuses on sometimes very pragmatic subjects, such as the shroud of Jae Rhim Lee which allows the body to decompose completely, for a total return to the earth. Artists, such as Cristina Hoffman, reflect on the rites and social gestures of mourning, this journey that allows us to move from pain to acceptance. Are we devoting enough time to it today? Doesn’t society, stripped of many conventions, seek to deny death and its consequences for the living? Because if death is a stage of life that is crossed alone, the living need support that our societies dedicated to efficiency too often refuse us.

In recent years, the Covid pandemic has paradoxically taken us even further from our dead by depriving us of the usual rites, such as gathering for a funeral. With this exhibition at Maubuisson Abbey, we have the opportunity to take a moment to reflect on the adequacy of our approach to mourning with our needs and our current society. An essential memento mori.