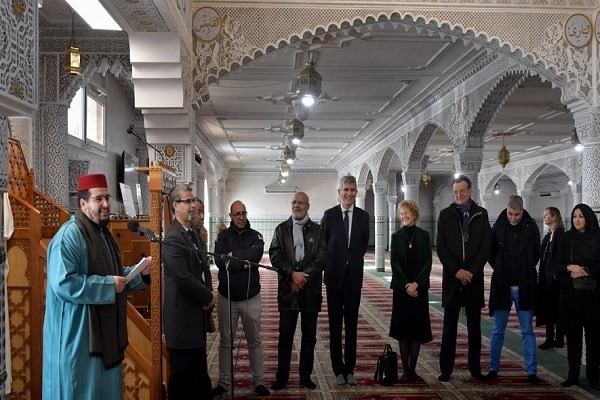 Tehran (IQNA) – The beautiful Moorish work with its stucco interlacing was officially inaugurated on Saturday. A project that had been postponed by the health crisis.

Official inauguration ceremony on Saturday with ribbon cutting in the presence of members of the Association of Muslims of Agenais, President Messaoud Settati at the head, the sub-prefect, the mayor of Agen, elected officials, mayors du Passage and Bon-Encontre and religious representatives of the various denominations.

Paul Chollet would have liked this mosque, the largest in Aquitaine, for which he fought, to be inaugurated during his lifetime, but the Covid thwarted his plans. Until the end, he hoped and he had come to visit his leaders and this place of worship a few weeks before his death. “A magnificent visit, full of emotion and joy, the fruit of his human commitment, but which sounded, without knowing it, like a farewell”, regretted Imam Mohamed Nayma paying a vibrant tribute to the former mayor “who has worked so hard to make this place of prayer worthy of our community. I welcome the presence of his son Pierre Chollet”. The spiritual guide also wanted to show his gratitude to the founders of the place, to the hajj present and to the benefactors who, through their generosity, financed this independent mosque. “A place of gathering against the temptation to divide us. We the heirs, we will never give in to the obscurantists”.

The mosque was built in 1996 in place of an industrial wasteland, once a fertilizer warehouse, and opened to worshipers a year later. “This mosque was born under the late mayor Paul Chollet who allowed us to acquire this location and supported this place of worship”, underlined Ahmed Laajami, spokesperson for the association, invoking a place resolutely open to the city.

In 1982, a first Muslim place of worship was created on rue Saint-Fiary opposite the station where 200 believers flocked on Fridays, but the capacity of this cramped room was insufficient for Friday sermons and Ramadan, so much so that ‘a reflection has become necessary. In 1997, the mosque was erected on rue du Jourdain, initially attended by 300 to 500 faithful, then welcoming between 800 and 1,200 people from 2009, to reach today 3,000 male and female practitioners at peak times, and through expansion phases.

Compliance work
The mosque, which has an area of ​​4,000 m2 including car parks, will undergo new compliance work in the spring by increasing the number of emergency exits and evacuations on the facade.

“This Saturday will remain a crucial date. The epilogue of a long march of the Muslim community which has gone from the quasi-clandestineness of rue Saint-Fiary to full visibility today. A mosque, a church or a synagogue are living bodies between celebrated festivals, a work of memory and spirituality. It will always be under construction and you will continue to develop it”, declared Jean Dionis du Séjour who was a privileged witness of its advent on the current site. He also praised the good relations maintained with Mohamed Raïq, the former president of the Muslim faith, the current president and gave thanks to the active women in the community.

“It was Dr. Chollet’s last public outing here. In his time, this decision was difficult to make, but with his heart of a Christian believer, he wanted the future place to be decent, he who had encountered Islam as a military doctor in Algeria”.

The mayor insisted on the importance of interreligious dialogue which is deeply rooted between the different communities, as a bulwark against racism and Islamophobia.

Muslim squares
The issue of burials in places reserved for people of the Muslim faith was also raised by the Imam at the conclusion of his speech. Welcoming the faithful during the five daily prayers and on feast days is important, but burying the dead with dignity is just as important. Especially since according to the Muslim rite, the burial must take place quickly. In Muslim countries, funerals take place within 24 hours of the death of the individual. However, in France, the burial period is a little longer, but does not in fact exceed more than 48 hours.

A problem of available places is emerging in Agen. The first Muslim square was inaugurated in 1973 in the cemetery of Gaillard which brought together 73 graves, but in front of a community which was called upon to grow, a second Muslim square was granted in 2006 by the city of Agen but which in turn , also reaches saturation since it brings together 180 tombs. Squares have also flowered in Passage d’Agen and Bon-Encontre, municipalities which have made land available. “An extension is now necessary,” said the Imam of the mosque, obviously looking for solutions.
The Little Blue

The largest mosque in Aquitaine inaugurated