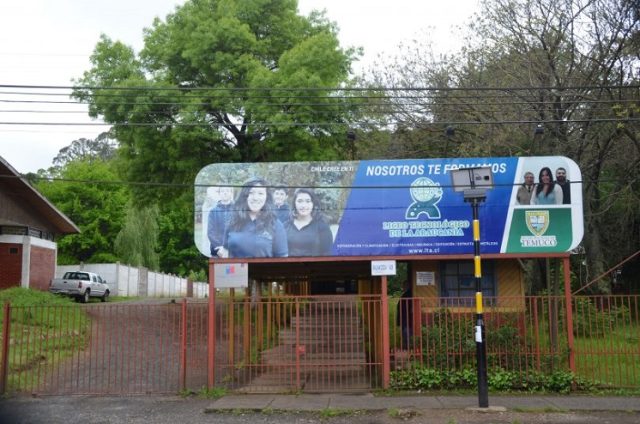 Calfiqueo Calfullán, indicated that the impact that inherited decisions are having on the legitimate demands of the Mapuche educational and cultural high school community, an establishment located at the foot of Cerro Ñielol, is dramatic.

Access to the Technological Bicentennial Lyceum in Temuco, at the foot of Cerro Ñielol

Profanation and sacrilege of sacred spaces in Temuco: The archaeological findings that little or nothing is known

The school community, due to a construction project, runs the risk of losing a third of its perimeter area and of seriously affecting an Eltún, a historical and sacred ceremonial site, as well as the loss of recreational and sports spaces, in an establishment, where more than 90% belongs to the Mapuche people.

“The community does not accept this arbitrary alienation, without consultation, and that did not consider the cultural and historical component of sustained loss in more than 130 years of State occupation in Mapuche territory”

The teacher’s leader points out.

Carmen Gloria Calfiqueo Curilaf. She is a State Teacher in Spanish, Master in Bilingual Intercultural Education, mention in Educational and Vocational Guidance Management. She works as a classroom teacher at the Technological Lyceum of Araucanía (former Pedro Aguirre Cerda). She is currently a leader of the College of Teachers and Teachers, holding the position of Community President.

1.- In general and based on the experience in tours of the different educational establishments in the commune, what would be the main advances and the main difficulties in the current Temuco school system?

The main advances have been to recognize the importance of the contribution of the College of Teachers in the pedagogical processes, in highlighting the importance of a good school coexistence, a favorable environment, not only in the classroom, but also outside it. In this sense, the importance of good treatment, respect and mutual considerations in the relationship between head teachers and teachers in each educational establishment of the commune was established. In this way the socio-emotional field is raised as a key issue, which meant that councilman Carlos Sepúlveda, in charge of the Education Commission of the municipality of Temuco, called us to form part of the preparation of a document to address action protocols on issues of overwhelm and labor abuse, gender discrimination, etc.

The communal guild has been highlighting the issues of transportation, precarious infrastructure and abandonment inherited from the previous management, plus issues of Padem, cancellation of salaries and assignments, teacher evaluation, among other issues.

2.- Do you consider that conditions of racism, discrimination and lack of reparation prevail in the school system in this region? If so, some elements to highlight?

In relation to what you askwe inherited and lived racism since the State of Chile usurped our territory with blood and fire. Today from the educational point of view, we have educational establishments with improvement projects that are not materialized with haste and the firm decision to have economic resources to materialize, and that not only remain in the design. Visiting schools, colleges and gardens, abandonment is observed in the last 12 years. Ideas of progress and neoliberal logic prevail that do not consider memory and the place it should be given in decisions. when the projects could seriously affect collective rights, in our case, we have the presence of the Mapuche people who have their own spirituality and worldview.

We evidence the slowness, for example, of the officialization of the Mapuche language in the commune of Temuco. It is not enough to pose for photos, or to consider it enough to show dances, food, crafts and advertising logos. There are deeper issues that generate serious doubts if the political will is to reinforce, respect, reassess and give new meaning to what has to do with areas of significance and cultural relevance.

3.- Regarding the situation of discoveries of ancestral pieces and remains in ancient ceremonial spaces and that involves the Technological Lyceum, what is the position in this regard and what is desired as measures of protection, conservation and respect?

As a college of teachers, we are supporting the position and arguments that have been expressed by all the teachers, who, after analysing, informing themselves, and verifying what the construction and improvement project that involves two educational establishments of the commune, they do not accept the terms of the project.

The evaluation led them to reject, due to the impact it has on the school community, that it be built on an ELTUN, a spiritual space that is part of a cordon of cultural and heritage significance at the foot of Cerro Ñielol, a place of historical significance.

From the union we propose that, in the decision to build, you have to consider the participation of citizens, the realization of the indigenous consultation, according to agreement 169, and make all the information transparent, without omissions.

The need to make transparent and consider all the variables that this building project contemplated, they make it an unfeasible project.

In the present, The impact that these decisions are having on the legitimate demands of the community of the Araucanía Bicentennial Technological High School is dramatic. who for decades have struggled to develop pedagogical work in a decent space that does not mean the sacrifice of accepting the lesser evil or nothing.

This political will to make invisible was very evident, especially in the management of former mayor Miguel Becker, who inherited a project that is harmful from the base, not only from the omission of the Mapuche cultural component, but also from the educational point of view. The new mayoral administration gave it continuity.

The school community would be cornered a third of its perimeter area, behind a wall and the extension of calle las acacias. The community does not accept this arbitrary alienation, without consultation, and that it did not consider the cultural and historical component of sustained loss in more than 130 years of State occupation in Mapuche territory.

4.-Finally. What elements should be considered so that the Technological School meets standards in terms of school justice?

The first thing is that projects should not continue to be accepted without the participation of the estates and actors of the school community. Participation and the exercise of democracy involves and validates decisions of this magnitude.

The physical space that allows the development of a comprehensive education that takes into account the existing diversity should be considered, that respects the ceremonial, recreational and sports spaces that are completely lost, leaving behind a wall and a street that further dwarfs the perimeter area that has historically belonged to the Araucanía Bicentennial Technological High School, formerly Pedro Aguirre Cerda de Temuco. The teachers and professors say that they are going to become «THE BACKYARD OF MUNICIPAL EDUCATION«.

The teachers question that, in order to advance in improvement, they have to accept that a project is linked to another project and its execution depends on that.. They wonder why it was not like that with the ISETT, Pablo Neruda, Mundo Mágico, Dufey, etc. They state that these community establishments have not “lost an inch of their perimeter area” when they improved their infrastructure or built new facilities for the school community.

Today, the community of the Technological high school, are standing up for the students who belong to the Mapuche people more than 90%, the majority come from the rural area of ​​the region. With this decision, technical-professional public education, in this case, industrial, is weakened.

The estates of parents and guardians, students, and a community of alumni show absolute disagreement with the construction project in the physical space that has belonged to them for decades.

They reflect that the improvement of the Araucanía Bicentennial Technological High School cannot continue to be conditioned by the project of another educational establishment. They will defend in court the right to a dignified and visible space for the community of Temuco. They will defend the students who, according to statistics, are among the most vulnerable from the various communes of Araucanía. They are the reason why their collective rights that respect the spaces of cultural significance will be defended. Education must be given within an educational context that allows learning from knowledge, culture, technical, sports, recreational and ceremonial training. as it has been historically.

Carmen Gloria Calfiqueo, teacher and community leader in Temuco: “There are establishments that are the backyard of municipal education”