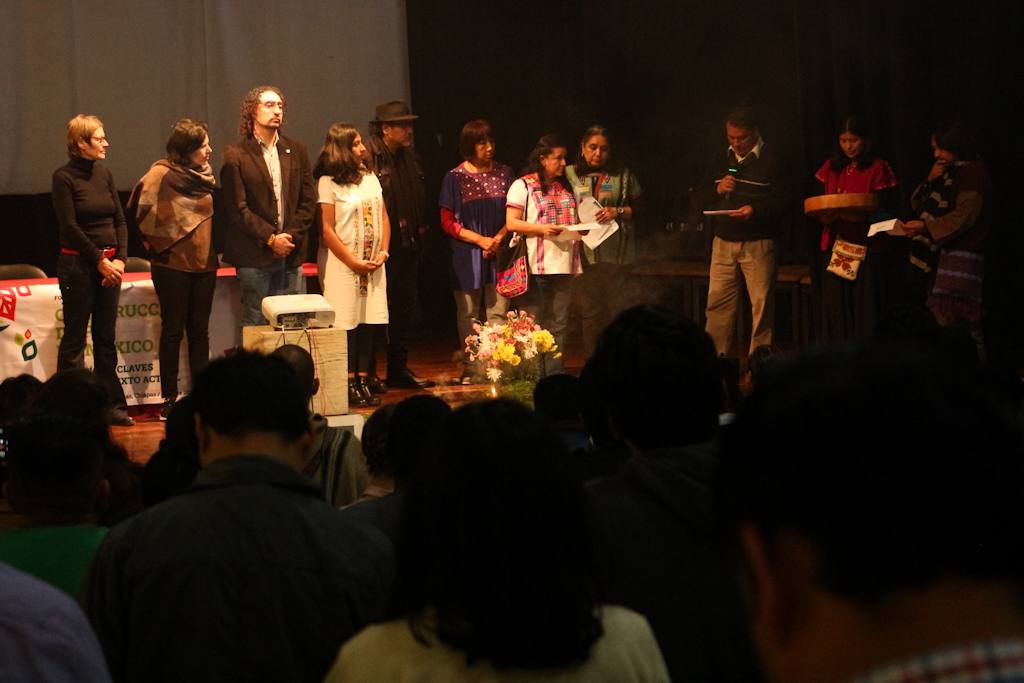 The commitment of the International Peacebuilding Forum in Mexico was to create bridges of dialogue between the different sectors of society to advance a joint peace agenda.

On October 25, at the “Daniel Zebadúa” Theater located in San Cristóbal de las Casas, Chiapas, the “International Peacebuilding Forum in Mexico” was held, which was promoted, for the most part, by organizations of national and international civil society, in order to reflect and analyze the current context of violence in the various territories of the country.

This Forum is the first public and face-to-face activity that was proposed as a challenge to deepen –to exchange knowledge, reflections Y experiences about how to deal with diversification Y deepening violence – in collective reflection, expanding it to other actors who work in a construction in favor of peace from a wide variety of social spaces.

The Forum was articulated in four tables round and there was an intervention of the Civil Society Choir Las Abejas de Acteal. In its table inaugural “Keys to building peace: an overall reflection” was carried out with the aim of thinking about the strategic frameworks that have been promoted in other latitudes for the construction of peace, the needs and the obstacles; In it they shared their reflections: Adolfo Pérez Esquivel, Nobel Peace Prize, Marta Ruiz, former commissioner of the National Truth Commission of Colombia, as well as Luis Jorge Garay, academic and international consultant.

The table 2: “Security, justice and territory”, was led by Jenny Pearce from the London School of Economics in the United Kingdom, as well as Guillermo Trejo from the University of Notre Dame in the United States and Francisco Huaroco Tomás from the indigenous community of Cherán, in which the question was How to stop the violence? in a context of human rights crisis and insecurity in Mexico, to distinguish the various actors that exercise violence with a territorial approach.

In the table 3: “Restorative practices, dialogue and reconstruction of the social fabric”, participated the Center for Research and Social Action (CIAS for Peace), Improbable Dialogues, from Colombia and the Human Rights Center of the Tlachinollan Mountain.

While, in the Table 4: “The cultural and spiritual dimension of peacebuilding”, the academic and social activist Pietro Ameglio, the journalist and member of Quinto Element Lab, Marcela Turati and the Bishop of the Diocese of San Cristóbal de las Casas Mons, Rodrigo Aguilar, were introduced.

At the dialogue tables, the participants exchanged their points of view and experiences on how the educationthe spiritualitythe artthe culture and the journalism are essential elements to transform the mechanisms that justify and support the exercise of violence in a society, but also for the construction of peace.

“The bet is to create bridges of dialogue between different sectors of society, from the academy, the experiences of community organization, journalists, social thinkers and advance a joint peace agenda.” according to the Fray Bartolomé de las Casas Human Rights Center.

This activity was part of the First Face-to-face Meeting of the Platform for the Peacebuilding in Mexicoa space created for dialogue and synergy in which in the last two years people and organizations linked to the Global Network for the Prevention of Armed Conflicts (GPPAC for its acronym in English).

In 2019, the I International Forum for Peacebuilding in Mexico was held in Barcelona, ​​which brought together 40 speakers including academics, social activists, institutions, and journalists. Three days of debates on the opportunities and openings that currently exist in Mexico to advance in the construction of peace, in a country with very high levels of violence: homicides, extortion, kidnappings, forced disappearances and numerous violations of human rights.

It may interest you:Violence increases in the Highlands of Chiapas, 32 refugee families in the community of Polhó

Violence increases in the Highlands of Chiapas, 32 refugee families in the community of Polhó

International Forum for the Construction of Peace in Mexico, a space for reflection and analysis to advance in favor of peace – Somoselmedio