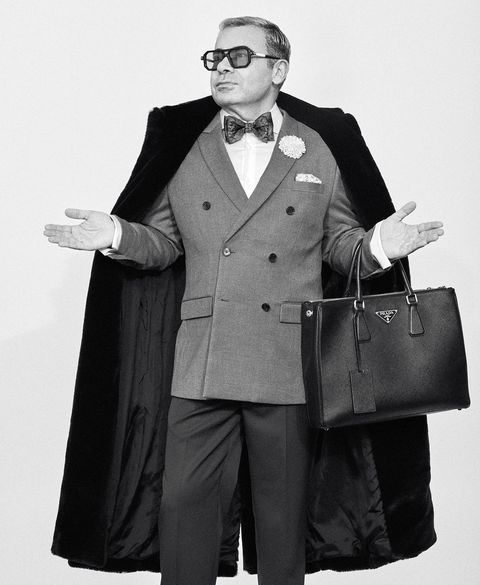 As you have written a book, before oblivion (Editorial Planeta), which is a cold-blooded self-portrait, we have transformed Jorge Javier Vázquez into our Truman Capote. Caustic vision, loose verb. Sheltered by an unexpected vitalism that emerges from the crudest, the most naked.

It’s crazy and exciting to chat with such a media character, so decidedly controversial, so vilified by some and applauded by others (“whoever criticizes me is that they don’t have enough intelligence to understand me,” he says with an explicit desire to provoke, but also from the full conviction). And it is also difficult to filter that torrent of ideas that go from the clairvoyant to the paradoxical, but we are going to try: next we will serve you this breakfast with a handful of diamonds from his philosophy of life, dynamited by a very deep personal crisis opened on several fronts and reborn thanks to therapy and the connection with her most authentic self. Free buffet of reflections on the family, addictions, sex, the couple, politics, work, death.

“I also haven’t had sex for 4 months. When I do it again, I want it to be like I’m getting deflowered. I do carry Cialis in my bag just in case”

Jorge Javier wears a coat Man’s, jacket Anthony Morato, shirt of Emidio Tucci, pants of sandro, glasses of Kuborum, vintage bow tie brooch Isidore Hernandez and his own bag prada. The subtext of the photo is “Where is my number one seller?”

When my father was about to die from a brain tumor, I slept in his bed one night. We began to speak in whispers, like small children. “I want to thank you for everything you have done for us and how well you have behaved,” I told him. And she replied, “There were times when your mother didn’t buy panties so we could give you nice things.” All that financial effort they made, for example to take me to an Opus Dei school in Badalona, ​​now makes me very emotional.

It would never cross my mind that my sisters would market my image once I was dead, like Rocío Jurado’s sister, who charged fans five euros for taking a picture with her. Sometimes I tell my sisters that we should go away for a weekend and Esther, who is a cashier at Carrefour, replies: “Handsome, I can’t take a vacation.” My family connects me to the real world, and I like it because with my profession it is very easy to lose that connection.

“Don’t drink, don’t drink…”, It was my mother’s great concern. “That you get very ugly and they are going to laugh at you.” But every time she came to see me in Madrid she came with two bottles of Vega Sicily. But let’s see, do I drink or don’t I drink? [risas]. It is normal for him to worry because he saw me when Pilar Rubio caught me –although there I was more smoked than drunk– and two other times that they took pictures of me in a disco and at an after party. To be 52 years old there are not so many caught, that there could have been one every week.

It has been providential for me to go to an addiction center. I went by my own feet. Silvia, my psychologist, told me that when I called and gave my name they thought I was joking. For many years of my life I have wondered if I was an alcoholic, because I used to go out a lot, also during the week for a while, and I enjoyed drinking… Until I stopped doing it. He didn’t sit well with me and I had horrible blackouts. Of remembering absolutely nothing. I needed to have the label. I think I’m addicted. Addiction is a disease, an obsessive-compulsive disorder, and I have addictive behaviors, with traits such as perfectionism and dissatisfaction, not knowing how to settle for what life gives you. All addictions are bad, even those that are not to substances: for years I have been addicted to work, because that adrenaline puts you in a state that later reality is not enough for you, it seems like real crap. And that is not like that. Knowing that I have addictive behaviors, that I can be addicted, has helped me a lot because it gives you tools to face reality.

Group therapy is being a powerful and effective tool. Because it supposes a disconnection from ‘my world’ and because it equals you, there you are a person with the fears and insecurities of any other. What is difficult for all of us is to share them. But when you share your fear, it vanishes. Like the Dementors of Harry Potter: you have to plant yourself strongly before them so they don’t suck your energy. For a year and a half, my psychologist was reluctant to put me in a group because she had never had a patient as popular as me and wanted to protect me, but now I am happy to go.

I haven’t had a drink at all since July. My psychologist classifies alcohol as a drug, because it is true that in this country we frivolize it a lot when it is perhaps the most dangerous drug. I have realized that without alcohol and without any other type of drugs, I begin to find out things that I did not record. Hostia, you begin to be much more aware of what it is to live. Because alcohol anesthetizes you. I do not want it to sound like herbs, that there is no worse faith than that of the convert and, although it is politically incorrect to say it, I have had a great time drinking and getting drunk, but it really is a super powerful thing. You realize that life speaks to you.

“My two exes will say that I am the best boyfriend they have ever had, although I don’t think I was a very good couple”

I also haven’t had sex in four months. Which is enough! I started going out in Barcelona 32 years ago, without any gay friends… I haven’t had a healthy relationship with sex, everything was related to secrecy. That can have its share of grace, but when I see now the naturalness with which young people live it, it makes me very envious. Look what idiocy: the other day I saw The Way We Were, with Barbra Streisand and Robert Redford, and I thought: “Oh, I want to experience something like this”. That when I do it again it’s as if they deflowered me [risas]. I would like to have another relationship with sex. Because I have already passed the screen of the bar and the crazy adventures, although I will surely return sometime, that I do not judge absolutely anyone. But it is that you enter a dynamic that is like an Olympic sport. I don’t want to have that urge to fuck or associate it with de-stressing or anxiety, I want to enjoy it. Now, I carry Cialis in my bag just in case, but they are going to expire. With how expensive they are!

Both of my exes will say I’m the best boyfriend they’ve ever had. Let’s see, being with me is a real fair. Although I don’t think they were a very good couple. All my life I’ve wanted to have a boyfriend, but for the first time I know that now I’m not ready. We ask couples to solve our lives, when you have to solve it yourself.

When someone as close as Mila [Ximénez] you die, Sometimes it’s hard to find the will to live. Because it’s not sadness, it’s something much deeper. A void I know I will never fill again. Mila was my partner, my Margot Fontaine, and I was her Nureyev. One of the things that has saved me is spirituality, my psychologist says that it is the hardest drug. Now I would not understand life without that spirituality.

I could have died when I had a stroke in Marrakech. I met a Basque guy on Grindr and we went to a cool nightclub called British. The only thing I remember is that he was like he was in the street and that boy told me: “Jorge, you were at the bar and you fainted like a lead, four of them pulled you out unconscious.” I thought it was because of the drunkenness, in fact I kept going and the next day I ended up in a beautiful after party, like from The Thousand and One Nights. It could have been straight up to heaven [risas]. I spent a whole week with the stroke, until I went to the doctor because my head hurt a lot. But I didn’t have that confrontation with death because I wasn’t aware of the gravity at the time and I didn’t have any aftermath. It is very difficult for your mind to accept that you could have died when you have remained the same.

“The first person to set up a Feijóo-Spanish, Spanish-Feijóo academy is rich. There is no way to understand this man”

I am not going to run for mayor of Madrid. When I pass about Maximo HuertaI was wondering what I would have done if I were Minister of Culture. Then you have to mingle with ministers from other countries and I don’t speak English or French, or you go to an interview and they ask you who your favorite painter is. “Well, Picasso, right?” [risas]. Or your favorite singer. “Paloma San Basilio, of course!” The hosts that would fall on me… It seems to me that in the progressive zone we have very prepared politicians: Pedro Sánchez, Yolanda Díaz, Nadia Calviño, María Jesús Montero… they are perfect to lead this country. Honestly, if I had to listen to Cuca Gamarra every day, I would think “What have I done to deserve this!”. or to Feijóo, that you have given him a cover. There is no way to understand this man. The first person to set up a Feijóo-Spanish, Spanish-Feijóo academy is rich. I think he is not going to become president of the Government, he is going to stay on the road.

Politics is made in the street, with your peers, not only from a party or a position. When your way of living matches your ideals. Over the years, what one has to be is a person committed to oneself and to one’s ideals. Why can’t we reds live well? Where is that written? When I hear phrases like “this guy is a communist”, it sounds like what I heard 50 years ago. It amazes me that there are especially young people so stale, so ancient.

I went to see Paolo Vasile a few days after the announcement of his departure and I began to cry in front of him. In a year and a half I have had to do many duels and this is one more. He has made a type of television to accompany people, I think we have alleviated a lot of loneliness and we have given hilarious and historical moments. It’s just that it doesn’t cost me anything to make television history [risas]. But I am not afraid nor do I wonder at night what will become of me. My career is done. If whoever comes doesn’t like me, I pick up the canvas like a puppeteer and see what happens. I like this uncertainty. And I like to live it sober. Because you live it differently. You accept it in another way. I’m going on Erasmus! Six months in Buenos Aires. I would love to live as an anonymous person.

“I haven’t had a drink or fucked since July, but I have Cialis in my bag just in case.”