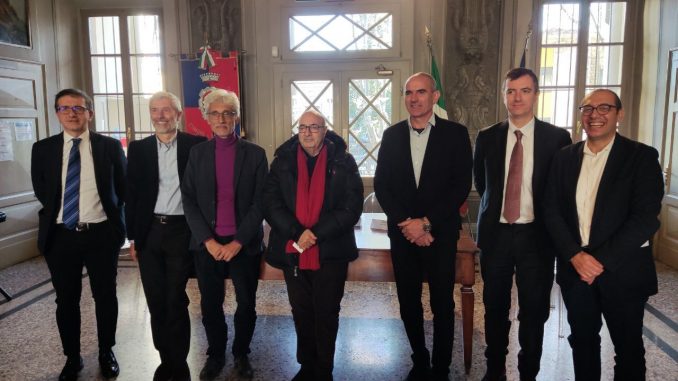 The set-up operations for the filming of the feature film entitled “Verona” started on 17 November at the Castle of Torrechiara, which will involve the castle and part of the village.

The musical film “Verona”, produced by the US Verona Partner Picture LLC with the executive production of Iervolino & Lady Bacardi Entertainment SpA and inspired by Shakespeare’s tragedy “Romeo and Juliet”, is directed by Timothy Scott Bogart and the Oscar-winning Dante as set designer Ferretti, with the participation of a cast of international value.

The production found the perfect settings in the towns of Langhirano with its Torrechiara and in Castell’Arquato to narrate some of the key moments of the film.

It is the result of the work done in recent months by the staff of the Emilia-Romagna Film Commission, which for years has welcomed, accompanied and supported international and national film productions, and encouraged stories to find places and atmospheres in our region.

“We are thrilled that the Castle of Torrechiara has been chosen as the location for a film with an international scope”, comments Giorgio Cozzolino, Regional Director of Emilia-Romagna Museums, “The request for concession of the monumental spaces, which reached us thanks to the collaboration with Emilia-Romagna Romagna Film Commission, was received with great satisfaction, taking into account the shooting methods, compatible with the protection requirements and the historical-artistic character of the places, and the positive effects in terms of enhancement and promotion also at an international level ” .

“Once again a high-profile film production has chosen the Torrechiara Castle as location privileged”, continues Carolina Tenti director of the Castle of Torrechiara, “The requests for enhancement and promotion were weighed, during the various authorization phases, in full respect of the monumental complex and its identity values ​​as a unique and extraordinary heritage of the Parma area and among the most significant examples of fifteenth-century fortified architecture. I trust that the initiative, aimed at a national and international audience, can renew the collective imagination of the Castle whose fame helped popularize the film Ladyhawke in the mid-80s”.

The choice of Torrechiara Castle also came on the basis of the collaboration agreement recently signed between the Regional Museum Directorate and the Emilia-Romagna Region, in order to enhance the regional museum heritage through the promotion and development of national and international film productions. that identify state museums and places of culture as locations for filming.

The Mayor of Langhirano, Giordano Bricoli, specifies “We accepted the agreement proposal and the possibility of providing collaboration with enthusiasm, both through our Technical Office for the logistical organization to support the filming in Torrechiara, and with the Culture Office in charge coordination with the Region and the production company. The international scope of this project could have important cultural and socio-economic implications, highlighting the extraordinary historical, architectural and landscape heritage of Langhirano”.

The Mayor of Castell’Arquato, Giuseppe Bersani, opened the doors of the transformed village, like the village of Torrechiara in Langhirano, into a real set, immersing the citizens and the streets of the village in the late medieval period. Bersani, like his colleague from Langhirano, specifies “I did not hesitate to take action personally and with the municipal offices so that this possibility can be transformed into an opportunity both for the immediate repercussions deriving from production activities and for the present and future media impact, very important for those countries, such as Castell’Arquato and Langhirano, which aim at an increase in tourism to then favor a socio-economic growth of the Arquatese community”.

“All of this is possible – recalls Gianni Cottafavi, Director of the Culture Sector of the Region – thanks to the usual effectiveness of the relationship between the Emilia-Romagna Region and local authorities, today better defined in a collaboration agreement aimed at promoting the activity of Emilia-Romagna Romagna Film Commission. Today this collaboration extends in an innovative and forward-looking way with the MIC Museum Management, which together with the two municipalities involved and the commitment of their respective offices – understanding the value and opportunity of production – have been able to team up, find organizational solutions best to foster an international film of this stature”.

“On the other hand, this small sacrifice in the daily life of a community, this momentary closure of a service, will come back multiplied in terms of economic repercussions and international visibility, as well as territorial enhancement through a cinematographic work, – specifies the Head of Emilia-Romagna Film Commission – as demonstrated by our past experiences such as, for example, Diabolik, There California, Water and Anise, The ant lordstill in Italian cinemas, or as we will see for A love – the new Sky Originals series – without forgetting of course Ferrari also produced by Ilbe and directed by Michael Mann”.

With this new film project, the Castle of Torrechiara once again becomes the place of choice for productions of the highest level. The manor house, used as a set for the 1981 film The tragedy of a ridiculous man directed by Bernardo Bertolucci and four years later for the aforementioned Ladyhawkedirected by Richard Donner, has also been cast as the location for television miniseries, such as The Charterhouse of Parma directed by Cinzia TH Torrini in 2012 and The Borgiasa Franco-German television series conceived in 2014 by Tom Fontana, but also for music videos such as the song It’s about us (1995) by the singer-songwriter Giorgia e If you weren’t here (2012) by the singer-songwriter Umberto Tozzi.

Castello di Torrechiara: the preparation of the set of “Verona” has begun, a film with an Oscar-winning scenography –