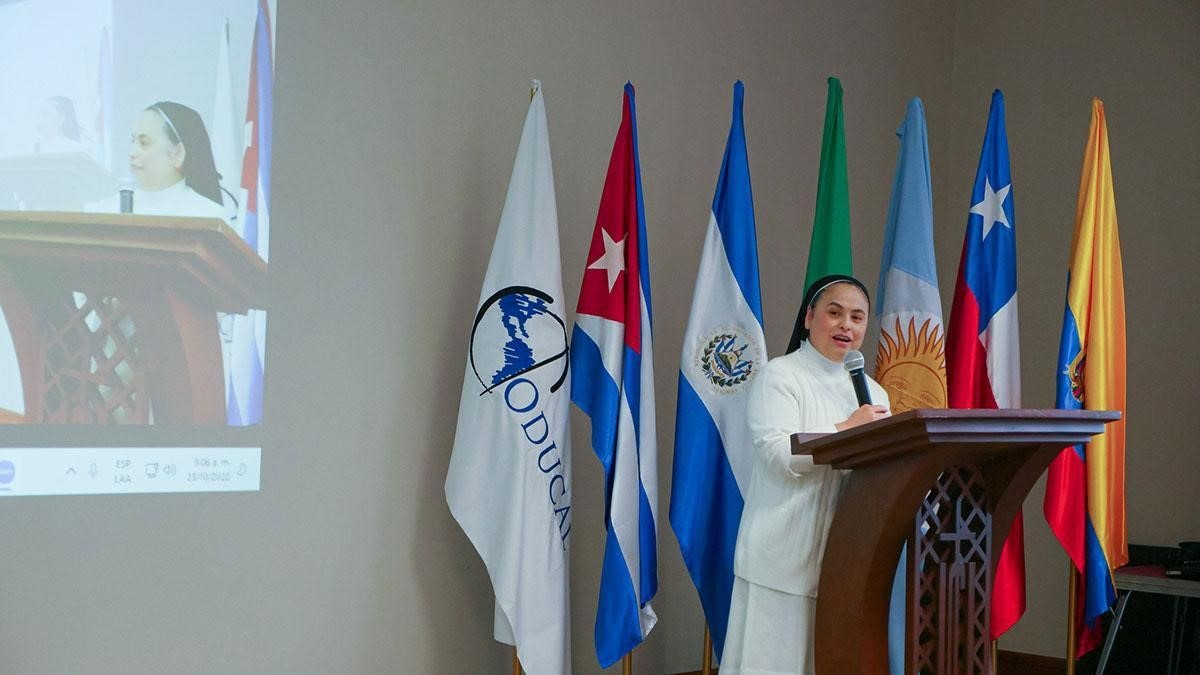 The problem is not openly with God but with the Church and the mechanisms to bring young people closer to Catholicism, was an idea that was heard last week at the I Meeting of the Intercontinental University Pastoral Network Walking together towards a university ministry that the Catholic University of Manizales (UCM) organized together with the Organization of Catholic Universities of Latin America and the Caribbean (Oducal).

The idea is from the General Secretary of the Don Bosco University of El Salvador, Xiomara Martínez Oviedo. She, with her experience as a member of the pastoral care of her University, expressed: “In the face of these problems we must propose spirituality not as an accumulation of dogmas or beliefs that must be memorized, but as a meaning of life.” She then added: “If we look for young people and we are interested in what they are interested in, then they may also be interested in what we propose.”

In this Meeting, held from October 24 to 28 at the UCM headquarters, 25 universities from 7 countries participated: Argentina, Chile, Colombia, Ecuador, El Salvador, Mexico and the Dominican Republic. The opening was made by the religious rector of the UCM, Elizabeth Caicedo Caicedo and the engineer, Rodolfo Gallo Cornejo, rector of the Catholic University of Salta (Argentina) and president of Oducal.

The meeting aimed to strengthen the ties of inter-institutional pastoral work in higher education in Latin America and the Caribbean and also, according to María de los Ángeles Casafus Carrillo, coordinator of the Pastoral Unit of the UCM, to identify what are the challenges that they face in the different universities of the network.

The experience of the Catholic religion is actively lived in the Oducal. The pastoral team of each university lives the experience of Christ through activities such as mass, encounters, meetings or training that encourage the interaction of young people with God.

Roberto Alexander Damas Zolórzano, Pastoral Director of the Don Bosco University of El Salvador, explained: “Alongside the extracurricular activities, there is accompaniment. This occurs in three ways: through the closeness of educators with students, the group through student assignments and individual accompaniment.

Likewise, the priest Edwin Germán Chávez Quintero, chaplain of the Catholic University of Colombia (Bogotá), emphasized that in pastoral care he brings the young university student closer to God with religious dialogue (the mass), with social dialogue (volunteering) and with an encounter with themselves (spiritual retreats).

“It is a reality that every time the boys do not know where to direct their beliefs and they have many doubts about it. That is why the main strategy we have is to listen to them”, confessed Carlos Manuel Martínez Cruz, head of the Pastoral Department of the Popular Autonomous University of the State of Puebla (Upaep).

The Oducal network has a challenge with young people, which is to bring spirituality closer to their lives. However, Cruz concluded that if they are not willing to listen, they cannot force anyone to participate in their faith. “By force… not even the socks”, pointed out the head of pastoral care of the Upaep.

According to the Youth in Ibero-America 2021 report, from the Fundación SM (of the Compañía de María de España), currently 90% of Ibero-American youth between the ages of 15 and 29 have family and education as a fundamental priority. The portal aceprensa.com, based on this report, published that health and the environment are also priorities for young people, and “at the opposite extreme they place religion and politics.” He added that the main concerns for them are “uncertainty about the future, poor job prospects, and social and economic inequalities.”

Regarding religion, he maintained that a clear majority of young people (64%) positively value ethnic, cultural and religious diversity. Religion is considered less important with average percentages below 60% (of those surveyed in Spain, religion ranked last when asked about 17 important things in life), especially if the educational level of young people increases.

In Colombia, out of every ten people, approximately six are Catholic, two are Evangelical and one is a believer, but is not affiliated with any religion. Therefore, Catholicism continues to be the predominant belief of Colombians with 57% of practicing people, according to the results of the National Survey of Religious Diversity, published in 2019 by sociologists William Mauricio Beltrán and Sonia Patricia Larotta. However, this figure is different with young people over the years, since according to the same survey the percentage of believers has been reduced to almost 50%.

Youth and Catholicism: “The problem” is not with God, it is with the Church