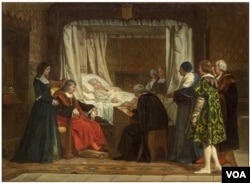 Many consider that birth and death are two events intertwined with each other more than it seems, because one precedes the other as something natural and inevitable in the existence of each human life. The difference is contributed by each one during his earthly stay.

Under this premise, experts have reviewed the behavior and rituals about the “fears” around death that have deepened since the 20th century and that have led today’s society to hide it in order not to face it.

British physician Kathryn Manis, an expert in hospice care and author of the book ‘With the End in Mind: Dying, Death, and Wisdom in an Age of Denial’(‘With Death in Mind: Dying, Death, and Wisdom in the Age of Denial’) maintains that both “dying and being born is simply a process”, which must be approached daily to lose fear and “see death in a normal way” since -in his opinion- “dying is not as bad as one would expect”.

The theme becomes effective this Wednesday, November 2, when the Day of the Dead is commemorated in Ibero-American and European countries with a Judeo-Christian tradition, followed by the saints of the Catholic Church on All Saints’ Day. Explaining how the dead are commemorated in countries with such deep-rooted traditions as Mexico and other Latin American nations is making headlines these days.

It is not usually deepened, however, in the process that leads us to the condition of deceased due to the “fear” that for us seems natural and intrinsic to death. But that perception is not so old, as exposed by thestudy ‘To die with property in the 21st century’, carried out by researchers Beatriz Ogando and César García, from the Casa de Campo Health Center, in Madrid, Spain.

These experts explain that in the last 100 years the approach to death has had a gradual change to see it as something “shameful” that must be hidden, which explains the perspective of carrying it alone.

“Death becomes an almost clandestine, shameful, inopportune event, so it will be excluded, conceivable only in solitude and not like the social and public event of yesteryear. The dying is an annoying burden that must be hidden or at least make up so that the image of death is not imposed on us”, maintain Ogando and García.

This contrasts with what our ancestors experienced with some notable variations from the Middle Ages to the 19th century with the common denominator that “death was a public and organized ceremony, presided over by the dying person who controlled the protocol. In the room of the dying, people entered freely; parents, friends, neighbors are present, as well as children”, indicates the study.

Currently it is approached from the perspective of an external fact “of the others”, and where the most important thing is the absence in that fact of the subject that contemplates it, a kind of “lucky not to be there”, according to the study. ‘To die with property in the 21st century’, which prevents “critical reflection” on one’s own death.

Ohio State University professor Keith Anderson led a study in 2011 titled ‘Stone Gardens: Looking for Evidence of Secularization and Acceptance of Death in Grave Inscriptions from 1900-2009′ to verify through the readings on the tombstones how the acceptance of death was declining.

“Death has become increasingly medicalized and marginalized, so that society has stopped accepting the finitude of life”, to disappear it from public life, according to this investigation.

They push to bring death back to life

Experts from different disciplines, both medical and humanistic, have begun to agree on the importance of bringing death back to life, which will help to minimize the anguish and loneliness of the dying, and also to better cope with grief and other processes that come with death. losses of loved ones.

The researchers indicate that the less it is accepted and processed as natural, the worse the loss process is. The subsequent consequences for the survivors are another edge of the investigations.

The author Kathryn Manis believes that at the bottom of the discussion lies the “loss of immense human wisdom” to face the end, so she believes that “it is time to talk about death again and recover that ancestral wisdom.”

“We have stopped talking about death,” says Manis. He also points out that the verb to die is even excluded where possible and replaced by phrases like “seriously ill” to hide the inescapable fact.

Experiments to create awareness of one’s own death are varied and can even be amusing, if someone takes it half seriously and half jokingly and poses it from good health and aware of what a “good ending” could be like.

Therapists have designed different methods to lose the fear of death. One of them suggests thinking about “a last supper”, which consists of thinking about what we would like to do and say in case we don’t wake up after that night.

Others aim to make comparisons with photographs of older adults and children in the different generations of the family “to naturally assume” the timeline of each individual of the clan.

Experts indicate that we should also resort to ancestral wisdom with different worldviews from pre-Columbian peoples, as is the case with part of the approach to the world of the dead in Mexico, according to Andrés Medina, an expert at the Autonomous University’s Institute of Anthropological Research of Mexico (UNAM).

Medina argues that the meaning of death in the Mexican collective consciousness has its roots in the worldview of the peoples of Mesoamerica.

“In mythology, corn is buried and when it is planted, that character that is corn leads a subterranean life for a period and then reappears as a plant (…) this is very well expressed in the Popol Vuh, where two brothers go to the Underworld and narrate their adventures to later reappear in the form of corn cane,” said Medina, alluding to the sacred book of the Mayan world.

And experts in other sciences such as psychology also point out that the person who becomes aware of the end of his existence can even “live fully every moment of the present” because he is aware of the now.

From other perspectives, such as those who work with people who are in the process of dying, the progress is already noticeable. The professor of Bioethics and Moral Theology at the Pontifical University of Madrid, Javier de la Torre Díaz, says that “the end of life can be a time of deep humanity”, but it takes individual work.

The key, according to the educator, is to face “dialogue” as a first step and “know how to say goodbye”, but previously there are parts to resolve, including “facing” the fact.

Nowadays, he adds, there are no prefabricated recipes because societies are as diverse as they are complex.

“[Existen] diverse attitudes and experiences of the religious and the spiritual in highly secularized societies. Some die with hardly any transcendent references and without spirituality, others in an immanent spirituality. Quite a few are believers without a church, without a community, without any belonging; but also paradoxically there are more and more who belong and have religious references by cultural identification but do not have faith”, explains Javier de la Torre Díaz to measure the situation.

If there has been “agreement” -he says- on points about “humanizing dying from an ethical point of view”, where many people make decisions in life in case they lose control of their faculties and decision-making in the face of a condition that prevent you from deciding your own ending, which pushes other lines of debate that are increasingly moving forward.

In hospitals in most developed countries, protocols are already in force that try to help patients “to die with the least physical, mental or spiritual suffering and to die well informed if they wish,” as described, for example, in the protocol of the Health Assistance Committee of the Hospital de La Princesa, in Madrid It also contemplates the option of “dying at home” if you wish.

The approach to death also has different conceptions in the different peoples of the world, according to the cultural tradition, their own customs and the communities that have developed bonds of coexistence that include dealing with death during life.

What does it mean to die in our times?