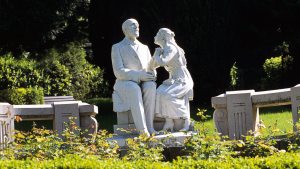 150 years after her birth, celebrated on January 2, 2022, Thérèse of Lisieux, the most famous saint of modern times, is celebrated by Christians around the world. Here are the ten key dates that have definitely inscribed little Thérèse in the hearts of the faithful.

How did a little Carmelite become a world famous and celebrated star of holiness? A few years were enough for his Story of a soul was a breathtaking success, becoming, with its 500 million copies sold, one of the most outstanding works of French spirituality. A few years for his message, that of the little way of love, to upset, convert and touch the hearts of many faithful. Only a few years – not even thirty years – for her to be canonized on May 17, 1925 by Pope Pius XI.

What is the secret of his extraordinary spiritual influence? From her early childhood to the Carmel, here are the ten key dates that made Thérèse of Lisieux a world star of holiness:

Thérèse was born in Alençon on January 2, 1873. Her father Louis was a watchmaker and her mother, Zélie, was a lacemaker. She has four sisters: Marie, Pauline, Léonie and Céline who is four years older than her. Thérèse is the last child of the Martin family.

When her sister Pauline entered the Carmel on April 6, 1883, Thérèse, torn at “having lost her”, experienced an acute crisis of an illness from which she had been suffering for some time, and which became as serious as it was mysterious. The family thinks she is lost: Thérèse has hallucinations, she no longer recognizes her sisters and no longer eats. His father then asked Notre Dame des Victoires that his parishioners pray a novena.

On the day of Pentecost, May 13, 1883, while she was still very ill, little Thérèse prayed to Mary. She asks him to have mercy on her. Immediately, she sees the statue of the Virgin smiling at her… Convinced of having been cured by Mary’s smile, she decides to place herself under her protection. She’s 10. Life resumes.

“My conversion”, she confided to her sister Céline, took place the night of Christmas 1886. Thérèse feels that God is giving her back the strength of soul she had lost when her mother died. She feels revived. “The Good Lord had to perform a small miracle and he did it on the unforgettable day of Christmas (…) He changed the night of my soul into torrents of light. »

Very young, Thérèse felt a call to religious life. She was 15 when she went on a pilgrimage to Rome to ask Pope Leo XIII for permission to enter Carmel before the age authorized by canon law. She obtained this dispensation and became a Carmelite on April 9, 1888, when the community celebrated the Annunciation. On the day of her profession, September 8, 1890, the young nun took the name: Thérèse of the Child Jesus and the Holy Face. And she begins to write her memoirs and she continues to write poems, letters, plays and hymns.

We are on June 9, 1895. Thérèse is touched by the story of nuns who offer themselves as martyrs to divine justice, in order to divert on themselves the punishments promised to the guilty. Thérèse, for her part, thinks that it is necessary to offer oneself not to justice but to divine mercy. This is what she does on June 9, 1895. She composes her Act of Offering to Merciful Love.

Since the summer of 1897 Thérèse suffered from the first attacks of haemoptysis. This is the beginning of tuberculosis. Thérèse died on September 30, 1897. During her last summer, she wrote a long letter to the mistress of novices, Mother Marie de Gonzague. She confides to him: “This year, the Good Lord has given me the grace to understand what charity is…” She thus reveals the divine dimension of her little way of love.

Struck by the number of testimonies of prayers answered by Thérèse of Lisieux, the faithful all over the world ask that she be recognized as a saint. The ordinary beatification process, under the responsibility of the Bishop of Bayeux and Lisieux, Thomas-Paul-Henri Lemonnier, opened on August 3, 1910. Thirty-seven witnesses testified on the life of Thérèse, including nine Carmelites from Lisieux. .. The cause was officially introduced by Pope Pius X on June 10, 1914. Two miraculous cures are recorded. Thérèse was beatified on April 29, 1923.

The remarkable events that occurred after the beatification of little Thérèse are not lacking, and we choose two of them: the case of a young Belgian, Miss Maria Pellemans miraculously cured at the tomb of Thérèse and that of an Italian, Sister Gabrielle Trimusi, suddenly relieved after a triduum celebrated in honor of Thérèse. The decree approving miracles was published in March 1925. Thérèse of Lisieux was canonized on May 17, 1925 in the presence of five hundred thousand people by Pius XI who called her “the star of his pontificate”.

In 1980, Jean Paul II, particularly attached to the spirituality of little Thérèse, decided to come to the basilica of Lisieux during his visit to France. On October 19, 1997, the year of the centenary of her death, Saint Thérèse was proclaimed a Doctor of the Church by the Pope. In his apostolic letter Divini amoris scientiahe explains:

“In the writings of Thérèse of Lisieux, no doubt we do not find, as with other doctors, a scientifically organized presentation of the things of God, but we can discover there an enlightened witness to the faith which, by welcoming a love trusting in the merciful condescension of God and salvation in Christ reveals the mystery and holiness of the Church. »

The Human Comedy by Ai Wei Wei in Venice
Catholic influencers propose a digital pastoral:
Knowledge and tools to face the world, the review "Monterosso: a sea of ​​books"
Tweet
Share
Share
Pin