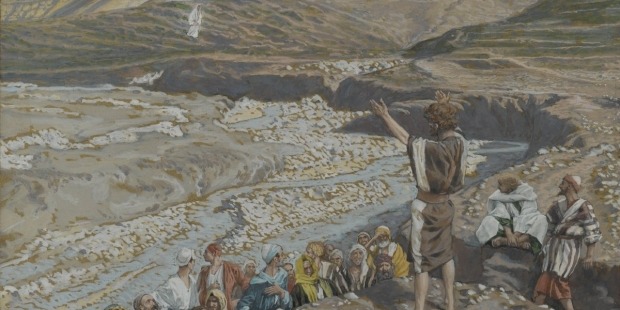 Pastor of the parish of Notre-Dame de Compassion in Paris, Father Christian Lancrey-Javal comments on the Gospel of the 2nd Sunday in Ordinary Time (Jn 1, 29-34). If John the Baptist recognized Jesus, it was because he had developed in the desert a spiritual sensitivity of which we have no idea. His “soul senses” were particularly acute.

It took courage for this parishioner who had lost her husband two years ago, and who suffers as much from his absence as from the behavior of her children towards her, it took courage for her to come and tell me that she had seen: “You’re going to think I’m crazy. But I saw my husband. I listened to her and reassured her: it happens. Quite often: four or five times a year people come, very embarrassed, to tell me of such visions or apparitions. I advise them not to talk about it to those around them who would actually take them for crazy. These visions are classic phenomena of the spiritual life, secondary since they say nothing about God, they differ from the visions of the prophets whom the Bible calls “seers”. During the Passion of Christ, “the men who guarded Jesus laughed at him and beat him. They had veiled his face, and they asked him: “Be a prophet! Who hit you?” » (Lk 22, 64).

The vision of John the Baptist

All the people who have had one or more visions, have heard words, had “locutions” – never forget them, and still dread them, have a sacred apprehension of them. Conversely, those who seek them are unconscious. Searching for them is forbidden, for our good, as is any breaking into the spirit world. Don’t play this, it’s playing with fire, eternal fire prepared for the Devil and demons (Mt 25, 41). John the Baptist saw Christ. He recognized it, not because they were cousins, but because Jean prayed and lived in the desert and there he had developed an acuteness, a spiritual sensitivity of which we have no idea, we who spend hours in front of screens , invaded and stuffed with images and sounds. It is a public health problem, “we are preparing generations of the deaf”, alarmed the doctors; it is above all a problem of the health of the soul, whereas next Sunday will be the Sunday of the Word of God.

The generations of past centuries had no more desire to read than we do: reading like music, literature like great musical works have always been reserved for the privileged few who do not know their happiness and their luck. On the other hand, they had for them the knowledge of key phrases from the Gospel – like this Sunday: “Behold the Lamb of God who takes away the sin of the world” (in the singular, peccatum mundi, the original sin from which we were delivered at our baptism) — vital words that will allow us in the evening of our life to prostrate ourselves before Christ when we see him with our eyes: Jesus, you are the Son of God! Save me !

To get in touch

Spirituality is a sensitivity to the things of God and to his love: it is natural and just as much takes shape and works: it sharpens. “I am afraid, said Saint Augustine, I am afraid of God when he passes. – What do you mean, are you scared? Yes, I’m afraid of not realizing it and letting it pass. The spiritual senses are not those indicated on the Internet or in personal development books, which mix imagination, conscience, intuition, whereas the senses of the soul have this in common with the senses of the body (sight, hearing, smell, touch and taste) that they are made to relate. Why do we have a body, why are we corporeal and sentient creatures? To communicate with each other, because we are relational beings.

The five senses of the soul

The first spiritual meaning is the gaze of love, when we look with the eyes of the heart: charity is finding the other lovable, and loving them. You find that Jean-Baptiste was not friendly? Because he called the Pharisees a brood of vipers? It is not lacking in charity to warn the sheep against the wolves, on the contrary. It is the gaze of love.

The second spiritual sense is patient listening. “An old age – said Pope Francis about Simeon and Anna – who has prepared herself for the encounter with God will not miss this encounter: she will be quicker, she will have more sensitivity. Listening patiently and, in the end, interior.

After the gaze (of love), the listening (patient), the sense of smell? Let’s say the flair, to know what the other needs, what is the service to be rendered to him. To be kind, patient and helpful: John the Baptist is the greatest of the children of men for having rendered the greatest service, showing Christ. Like the Curé of Ars: I will show you the way to Heaven. The look of love, the patient listening, the flair to help.

The spiritual “touch” is all in reserve, which touches, a sign of delicacy, indulgence and tolerance. He does not press if it hurts. John the Baptist did not ask more of people than was possible for them. Touching the heart gently.

Finally, taste is linked to memory, to good memories: this sense of the soul fills with gratitude and fidelity. From his childhood, Jean Baptiste kept the memory of parents faithful to the Lord. He himself gave the witness of fidelity even to martyrdom.

The five senses of the soul are the gaze of love, the patient listening, the flair for rendering service, the gentleness of indulgence, the taste for fidelity. To remember this, think of Saint Paul’s hymn to the Corinthians: love takes patience, love is helpful, it endures everything, it never disappears. Love, patience, service, indulgence, fidelity. Kind, patient, helpful, forgiving, faithful.

Indonesia quake survivor loses 11 family members
Luisetta, the teacher
"There is a lack of a study on the reality of the dissemination of palliative care"
Tweet
Share
Share
Pin